Nitrogen (N) is an essential element for plant growth and thus a necessary part of global food systems. But when nitrogen concentrations are excessive or out of place, problems occur.

The principle sources of nitrogen in our environment — plants, water and air — are interrelated (Figure 1). Even though farmers may make proper fertility and crop management decisions, they cannot control the environment (rainfall, temperature, sunlight, shifting seasons, etc.), which alters nitrogen concentration in crops and in water supplies. When out of balance, nitrate-nitrogen — and its more toxic form, nitrite-nitrogen — concentrations may be great enough in either plants or water to harm or even kill animals. 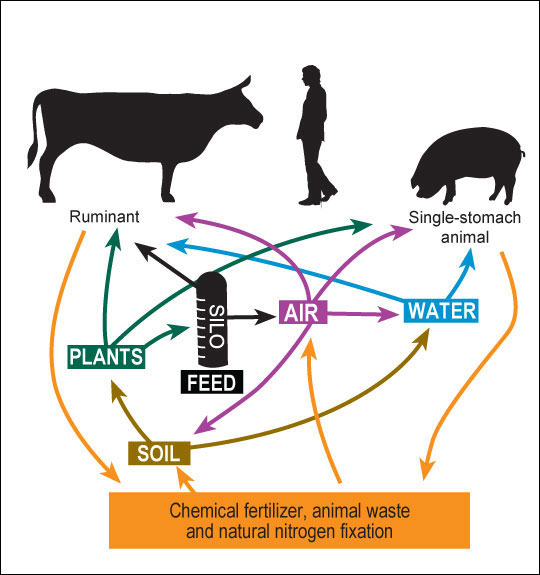 Nitrate is one of the two forms of nitrogen that plants absorb from soil. Plants use the nitrate-nitrogen in soil to make amino acids — the building blocks of protein. Under ideal growing conditions, plants do not contain dangerous concentrations of nitrates/nitrites because plants rapidly convert the nitrate into protein. However, when environmental conditions arrest growth, plants cannot convert the nitrate into protein as quickly as the nitrate is taken up. Thus, nitrate accumulates in plant tissues. Factors that favor nitrate/nitrite accumulation include excessive application of manure or commercial nitrogen fertilizers, water-stressed (drought) conditions and cold weather. Forage plants, especially corn, sorghum, sudangrass, sorghum-sudangrass hybrids and johnsongrass, often accumulate unsafe concentrations of nitrates/nitrites when under drought stress. Once it rains enough to end the drought, plants require about two weeks of normal growth before nitrate concentrations return to safe levels.

The developing fetus of pregnant animals is quite sensitive to nitrates and methemoglobin. As a result, pregnant animals often lose their fetuses without any apparent long-term damage to themselves.

Old animals or animals in poor body condition are less tolerant to nitrates/nitrites than are well-fed animals.

Water supplies may contain enough nitrate to produce acute poisoning. When the water supply contains nitrate, nitrite or both, less nitrate/nitrite can be allowed in the feed. If animals are gradually acclimated to nitrate and no other stress is applied, the 2,500 ppm (parts per million) level of nitrate-nitrogen may be tolerated.

A safe level of nitrate/nitrite is impossible to set because of the variables: the wide ranges of individual animal tolerance, variability of conversion of nitrate to nitrite in animals' intestines, dietary history, disease level and environmental conditions. Remember, a small amount of nitrite is lethal compared to nitrate. When possible, nitrate-nitrogen in drinking water should be below 10 ppm and be free of nitrite. Total rations should contain less than 700 ppm nitrate-nitrogen and be free of nitrite.

Table 1
How much nitrate is too much?

Subclinical nitrite poisoning occurs when low levels of nitrite are consumed over a long period. Prolonged exposure to nitrite can cause degeneration of the brains lungs, heart, liver, kidneys and testes. The affected animals appear to be in normal health but abort their young, fail to conceive, milk poorly or are unable to adjust to cold temperatures.

Acute nitrite poisoning is easily diagnosed by the blue mucous membrane and chocolate-brown blood. However, losses from nitrate/nitrite poisoning often go undetected. For instance, a mature cow eats some high-nitrate feed in mid-summer and as a result aborts her fetus. When the herd is checked for pregnancy some months later and the offending feed is no longer part of the ration, clinicians have a difficult time determining the role of nitrates.

Subclinical nitrate/nitrite poisoning is difficult to diagnose because other conditions for which nitrite is responsible, in whole or part, are similar to symptoms produced by numerous infectious and noninfectious diseases. Clinical and analytical laboratories can be used to determine what condition exists. The first step should be to test for nitrate/nitrite all the ration components, water supplies and weeds to which animals have access.

Ensiling can reduce nitrate concentrations in feeds. The reduction varies from nil to as much as 40 percent. To maximize this reduction, the silage should be 50 to 70 percent moisture, packed tightly and kept airtight during the ensiling process. Testing for nitrate/nitrite concentrations before feeding is recommended.

Silage made from high-nitrate feeds often produces silo gas. Silo gas can be lethal. This gas forms in silos during filling and for a week or so afterward. The amount of forage nitrate need not be high for the reaction to occur. The gas may be colorless, yellowish-red or reddish-brown and have a pungent, irritating odor that smells like bleach. These gases are toxic at amounts greater than 10 to 20 ppm; a silo may generate enough gas to raise the level in surrounding air to over 100 ppm. The gases are heavier than air and settle in the silo chute and buildings at the base of upright silos, as well as near bunker or pit silos.

Drainage from silos may be toxic. Take care to prevent this drainage from transferring nitrate/nitrite to wells, ponds or streams.

Excessive nitrate in feedstuffs and water is an important consideration in animal health. Forage plants, especially sorghums, corn and certain weeds, have long been known to accumulate nitrate to levels that kill cattle, sheep and horses. Drought, unusually cold and cloudy weather, and excessive nitrogen fertility can cause plants to have toxic levels of nitrate.

Water supplies may contain toxic levels of nitrate from surface water contamination and, in some areas, from leaching of the fertilizer nitrogen into groundwater. Acute poisoning of livestock, especially young pigs and cattle, continues to occur from water supplies containing excessive nitrate/nitrite. Laboratory testing of water and feedstuffs is always recommended.