Managing Ponds and Lakes for Aquaculture and Fisheries in Missouri: Establishing Hybrid Sunfish in Ponds for Recreation

This fisheries and aquaculture guide is one in a series being developed jointly by MU Extension and Lincoln University.

Sunfish — bluegill, redear and longear sunfish — are among the most popular species of fish for angling in Missouri (Figure 1). They are relatively easy to catch on a variety of lures and baits and provide a challenge for anglers of all ages, making hybrid sunfish a popular choice for stocking in ponds to improve angling opportunities.

Being a mix of two species, hybrid sunfish have attributes of both parents. Such attributes include fast growth, reduced reproduction, ability to eat floating fish feed and an aggressive feeding behavior, which makes them easy to catch. Although hybrid sunfish are not sterile, breeding is greatly reduced because 85 to 95 percent are male. Hybrid sunfish cannot replace bluegill in a pond stocked with bass and bluegill because they do not produce enough offspring to provide enough food for largemouth bass. 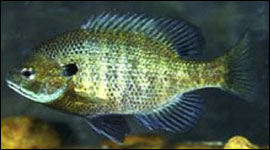 Figure 1
Bluegill (left) and red-eared sunfish (right) are among the most popular sunfishes to stock in ponds and lakes in Missouri.

Successfully managing a hybrid sunfish pond requires following stocking and harvest recommendations. Table 1 lists various stocking rates and options to consider.  Stocking rates will depend on the fertility level of the pond water and whether you plan to feed the fish a pre-prepared fish food during the year.

In most situations, hybrid sunfish fingerlings should be stocked along with largemouth bass fingerlings. This combination prevents overpopulation and creates ideal growth conditions for the hybrids that were originally stocked in the pond. When stocked along with bass, hybrid sunfish offspring do not survive because bass will eat them. Largemouth bass that are caught should be released to preserve a balance between predators and prey. Stocking bass is a management decision meant to keep the production of hybrids down to improve hybrids' growth. You can also stock channel catfish fingerlings for an additional angling opportunity.

1If largemouth bass were included, an alternative stocking rate would be to stock half the number of hybrid sunfish and add that number of bluegill in the pond stocking.

You can establish a feeding program using floating catfish pellets that are at least 28 percent protein. When water temperatures reach 60 to 65 degrees F, provide as much food as fish will eat in 15 to 20 minutes. Adjust the amount of feed each day as the fish grow, and avoid overfeeding. If fish are not eating the feed offered within 20 minutes, you are probably overfeeding, which can affect water quality. A demand fish feeder can save you time and money by automating the feeding process.

Keep records of the number of hybrid sunfish removed so you can restock with fingerlings when 50 to 75 percent of the originally stocked fish have been caught or removed. Restock hybrid sunfish after four or five years to maintain a quality hybrid sunfish fishery. Restocking will be necessary because any of the second-generation hybrids that survive will be more like the original bluegill species and therefore more apt to reproduce. Keep in mind that the goal of hybrid sunfish management is to produce large sunfish, so bass growth is typically undesirable. This process is an example of a "put-and-take" fishery, which means the hybrids that are stocked, raised and caught will need to be replaced in future years.

When restocking, plan to also catch and remove largemouth bass from the pond, or stock larger hybrid sunfish fingerlings of at least 3 to 4 inches. Another option is to completely drain the pond, if you have the capability, and start over rather than restocking fingerlings in an existing pond. If you choose to drain the pond entirely, restock at the same rates as the initial stocking.

Sunfish and sunfish hybrids are often overlooked by pond owners because of their small size, but they're a great choice for fishing and eating. Sunfish make an excellent meal because they have good flavor, firm white flesh and contain little fat. Producers with the Missouri Aquaculture Association sell sunfish fingerlings and can provide information on developing a hybrid sunfish. Refer to the Missouri Department of Conservation's Missouri Pond Handbook and contact your local MU Extension Center or the Lincoln University Aquaculture Extension Program for additional information on managing a pond for hybrid sunfish production and fishing.