Robert A. Pierce II
Department of Fisheries and Wildlife Sciences

Paddlefish, sometimes known as spoonbill, are among the oldest fishes in existence; fossil records date their appearance to before the first dinosaurs. The North American paddlefish (Polyodon spathula) is distinguished by its long, paddle-like snout, or rostrum (Figure 1). Its nearest living relative, the Chinese paddlefish (Psephurus gladius), is found in the Yangtze River and has a cone-shaped snout.

Paddlefish commonly inhabited and moved freely within large, free-flowing rivers, channels, backwaters and oxbow lakes of the entire Mississippi River drainage. However, significant declines in paddlefish stocks have been occurring throughout their range. One of the primary reasons for the decline in paddlefish populations is the loss of spawning habitat due to the alteration of river habitats. Reservoir construction has eliminated many traditional spawning sites and interrupted natural spawning migrations. Pollution, illegal fishing and overexploitation by commercial anglers has also contributed to the decline. 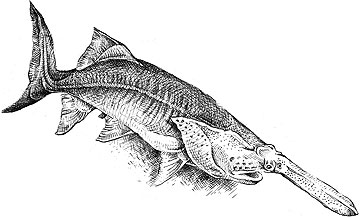 Paddlefish are an open-water species and highly adaptable to a variety of habitats. Paddlefish typically inhabit rivers within the Mississippi River drainage, and populations can be found in Harry S. Truman Reservoir, Lake of the Ozarks, and Table Rock Lake.

Paddlefish are one of the largest freshwater fishes in North America, commonly reaching 5 feet or more in length and 60 pounds in weight. They can live more than 30 years and reach weights of almost 150 pounds.

The elongated rostrum or "paddle" of the North American paddlefish is about one-third the length of its body. The rostrum is absent in newly hatched young but begins to grow within one to two weeks and is fully developed within four to five weeks.

Paddlefish are closely related to sturgeons, a group of fish having a cartilaginous skeleton. Unlike most fishes, paddlefish are filter feeders for most of their lives, filtering and consuming minute free-floating animals and aquatic insect larvae as a primary food source. The jaws of adult paddlefish have no teeth. Instead they possess gill-rakers (attached to the gills) that enable them to efficiently filter zooplankton and other food organisms from the water. This adaptation allows adult fish to increase their consumption of food, thereby increasing their potential to grow to relatively large sizes. Recent studies suggest that the rostrum is used to detect weak electrical signals emitted by concentrations of zooplankton.

Paddlefish grow more rapidly than other warm-water fishes, especially during their first year of life. Studies have shown that when food is unlimited, the fish can grow up to 20 inches during the first year. These growth rates are directly related to the abundance of the plankton population in a particular body of water. When food is not limited, paddlefish may double or even triple their weight during the next few years. Research has shown that this type of growth occurs faster in reservoirs and other impoundments than in rivers because of the abundance of food sources.

Paddlefish are a valuable sportfish in Missouri and can be legally harvested in the wild during a special season defined by the Missouri Department of Conservation. Paddlefish are not readily caught by conventional fishing methods but instead are "snagged" by dragging large, weighted hooks across the bottom of rivers and reservoirs known to hold the fish. Heavy-duty reels, poles and line are needed to hook and land these large fish. Additional information on sportfishing for paddlefish in Missouri can be obtained from the Missouri Department of Conservation online at http://mdc.mo.gov/node/1002.

Paddlefish, like sturgeon, are highly valued for their grayish black roe (eggs), which can be processed into caviar, and for their boneless, firm, white meat. Most paddlefish products have been obtained from wild populations. However, overexploitation and contamination from pollutants have made it necessary to add the species to the Appendix II list of the United Nations' Convention on International Trade of Endangered Species of Wild Fauna and Flora (CITES). This listing prevents the import or export of paddlefish products into or out of the United States unless a CITES permit has been obtained through the U.S. Fish and Wildlife Service (http://international.fws.gov/). This means that the growing demand for paddlefish caviar and other products must be met through commercial paddlefish production.

Caviar
Caviar was once defined as salted sturgeon roe from fish caught from the Caspian Sea. However, a major decline in sturgeon from the Caspian Sea has resulted in an increasing demand for alternative sources of caviar. The most important sources of high-quality caviar are the sturgeons (Acipenseridae, 26 species) and the paddlefish (Polyodontidae, two species). The fish must be sacrificed to obtain high-quality roe.

Paddlefish caviar is often compared to sevruga the most popular Caspian Sea caviar. Paddlefish roe resemble sturgeon roe in egg size and grayish color, but when processed, the caviar has a mild, less salty taste.

Raising paddlefish in impounded waters may be an economical means of obtaining large amounts of roe for caviar without influencing wild populations. In theory, if paddlefish are stocked at low rates per surface acre, they should not affect the natural food supply or other fish populations. With adequate supplies of zooplankton, their primary food source for most of their life, paddlefish grow very rapidly (up to 10 pounds per year).

Techniques have been developed and perfected to propagate paddlefish artificially, and fingerlings can be raised intensively in production ponds. Then the fingerlings (or armlings) can be grown for meat or roe extensively in ponds or lakes in concert with other uses of the pond. The extensive production of paddlefish in these impoundments is commonly called "reservoir ranching" (Figure 2).

Reservoir ranching of paddlefish relies on the presence of natural zooplankton so that paddlefish "grow-out" requires little cost and management. Paddlefish trained to eat commercial feeds can be stocked into lakes and ponds (at relatively low stocking rates of five per surface acre of water) and will naturally switch to filter feeding. Preliminary studies in Kentucky reservoirs indicate that stocking densities of five paddlefish per surface acre have not adversely affected the ecosystem.

Reservoir ranching is an extensive aquacultural production system in which young fish (about 12 inches long) are stocked into a reservoir, lake or pond and are permitted to forage on natural food supplies for a specified period of time before being harvested. This system for paddlefish caviar production is potentially economical for meat production as well.

Paddlefish stocked at low densities (about five per surface acre of productive water) in impoundments that are at least 5 acres in size can reach 10 pounds in about 18 months. They can then be sold for meat products or be permitted to grow for an additional six or seven years until mature, when they are harvested for their roe. Fish are typically harvested with gill nets with nearly 90 percent efficiency. Production depends on the fertility (productivity), food supply and temperature of the water.

Currently, Osage Catfisheries, Inc. (online at http://osagecatfisheries.com/) a private hatchery located in Osage Beach, Missouri, is the only hatchery in the United States that has a permit from the U.S. Fish and Wildlife Service allowing the production and shipment of paddlefish to international markets. They conduct a reservoir ranching program that provides qualifying lake and pond owners the opportunity for additional income when stocked fish are harvested (typically after six to eight years).

Under a contract, Osage Catfisheries supplies 14-inch or larger paddlefish at a recommended stocking rate of five fish per surface acre of water. The fish remain the property of Osage Catfisheries. In exchange for the stocking and ranching of the paddlefish during growout, the owner of the lake or pond is compensated at the time the fish are harvested. Compensation is based on total net weight gained by the individual fish.

Note
Impoundments previously stocked with fish obtained from the Missouri Department of Conservation are technically defined as "waters of the state" by the Wildlife Code of Missouri (3 CSR 10-20.805(59)). These impoundments are eligible for reservoir ranching, but written authorization from the director of the Department of Conservation is required.

Using an Osage Catfisheries Inc. client database, an impoundment owner experience and perception survey was administered to assist in determining the satisfaction of pond and lake owners that had stocked paddlefish in their impoundment.

Topics covered included lake size, primary uses, management concerns, and whether paddlefish had positively or negatively affected the use of their impoundment. In addition, these participants were asked if the paddlefish ranching program had impacted any future plans for their impoundment. Thirty-eight surveys were collected and analyzed for this study.

The average pond/lake size that is currently enrolled in the paddlefish ranching program is about 14 acres. Only 10 percent of the respondents had some type of aeration device on their waters.

Table 1 shows the length of time the landowner has had paddlefish stocked in a pond or lake. Most landowners have had the fish stocked for three to four years. Table 2 shows the uses of the ponds/lakes other than raising paddlefish. Livestock watering refers to the use of water tanks served by the impoundment. Osage Catfisheries, Inc. does not stock paddlefish in impoundments where livestock have direct access to the water.

Table 1
Number of years landowner has had paddlefish in ponds/lakes.

Table 2
Other uses of the ponds/lakes.

Table 4
Changes in pond/lake characteristics since paddlefish were stocked.

Paddlefish can grow to be larger than most other fish that are normally stocked in recreational waters and are therefore quite noticeable when they surface. Table 5 shows how often the lake/pond owners noticed the fish surfacing in their waters.

Landowners are compensated for leasing out their waters for the raising of paddlefish. Nearly 60 percent of the landowners received cash payments for leasing out their waters. About 10 percent received the service of stocking sportfish for payment and 30 percent received a combination of the two. About 95 percent of respondents stated that if they had additional water acres available, they would consider leasing out those acres as well. Most were also interested in stocking multiple-aged paddlefish for a monetary incentive if the practice was determined to be feasible.

The demand for farm-raised paddlefish products (both within the United States and internationally) is substantial and is expected to increase dramatically as wild populations of paddlefish and sturgeons throughout the world continue to be threatened by overexploitation, pollution and habitat loss. Paddlefish ranching provides a sustainable method for producing paddlefish products, including meat and caviar, for markets throughout the world, without the negative effects caused by overfishing and habitat loss.

The potential economic opportunity of paddlefish ranching exists in Missouri due to the large number of privately owned ponds and lakes (more than 350,000) within the state. Through reservoir ranching, qualifying pond and lake owners can receive an additional income with little or no investment. However, as with any enterprise, a certain amount of risk is involved. It takes six or seven years before paddlefish grow to the sizes that produce adequate amounts of roe and meat products. Any number of potential pond problems can occur during this time, including those associated with management and water quality, as well as environmental factors such drought.