The name carpenter bee applies to several species of bees in the United States that excavate tunnels in sound wood. The only species of economic importance found in Missouri is Xylocopa virginica (L.), a large species also known from Florida north to Connecticut, and west to Illinois, Kansas and Texas. They are similar in size and appearance to bumble bees (Bombus spp.), but with the top surface of the abdomen being black, almost entirely hairless, and shiny (Figure 1). Males have a white face, whereas the female’s face is black. 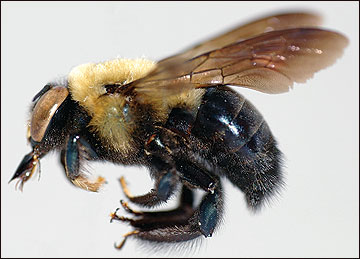 Carpenter bees are normally considered to be beneficial insects because they pollinate a wide variety of plant species. However, when making tunnels in the wood of human structures, they are considered to be economic pests. The openings to these tunnels are a near-perfect circle measuring about ½ inch in diameter. The tunnel goes straight into the wood for a few inches before making a 90-degree turn and following the length of the wood (Figure 2). It is not unusual for several tunnels to extend out from a single opening.

Female carpenter bees construct individual cells within each tunnel. Each cell contains one egg and enough food for a developing larva. To make the food, she collects pollen and mixes it with plant nectar to form a substance called bee bread. She places the food into the tunnel, lays a single egg on it, and builds a partition in the tunnel with cemented wood chips. She continues this process until 6 to 10 cells are constructed.

The lifetime of a carpenter bee, from egg to death, covers one year. New adult bees emerge briefly in August or September, feed, and reenter their galleries to pass the winter. In the spring, those bees that survive winter emerge again in April, mate, and produce a new generation. They reuse existing tunnels or build new ones in which to lay their eggs. These adult bees die in July, after mating and egg-laying. Carpenter bee activity begins again when their offspring have matured and emerge briefly during September. Infestations may persist for several generations over several years, with each generation lasting a full year. 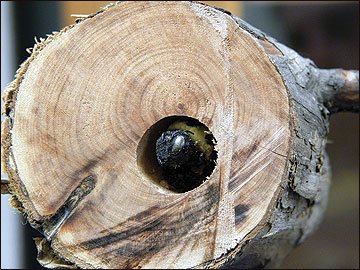 Apply chemicals only where needed or justified. Before using any chemical, read the label carefully for directions on application procedures, appropriate rate, first aid, storage and disposal. Make sure that the chemical is properly registered for use on the intended pest and follow all other label directions.

Keep insecticides in original containers, complete with labels, and keep them out of the reach of children and pets. Do not allow children or pets near treated areas before these areas dry. Carefully and properly dispose of unused portions of diluted sprays and empty insecticide containers.

Management of carpenter bee populations consists of treating each individual tunnel opening with insecticide. Tunnel openings should be treated after dark when the bees are calm and in the nest — preferably on cool nights. Use a pressurized can of bee/wasp spray that shoots a stream of liquid into the tunnel and immobilizes the bees. Many products are formulated to spray in a stream. Cotton soaked in a liquid insecticide and placed into the gallery is also effective. Be sure to wear rubber gloves when using this method. You can also place a longer-lasting insecticide — such as a dust, wettable powder, or microencapsulated insecticide formulation — inside the galleries. Dusts usually work best. Dust is most easily placed in the gallery opening using a hand duster. A flexible bottle with a nozzle makes an acceptable hand-duster. Fill the bottle no more than one-third full, insert the tip in the entrance hole, and inject the dust by alternately squeezing and releasing the pressure on the bottle.

A few days after treatment, tunnels should be filled with caulking compound, plastic wood, or a tight-fitting (½-inch) wooden dowel glued in place. If paint would be acceptable on the wooden surface, painting it will discourage further attack by other carpenter bees.

If mating, tunneling, and egg-laying activities have already begun in the spring, you will need to treat the tunnel openings at least twice. The first treatments occur during the spring activity period.  These treatments eliminate the adults that are mating and building new nesting sites, but may not affect the eggs and larvae that are already developing inside the brood chambers. A second treatment can be made to the tunnel openings during the late summer activity period to ensure that adults that emerged from these larvae are also eliminated. Tunnels can be sealed after this second treatment.

When carpenter bees are discovered during the brief activity period of late summer and early fall, a single treatment can be applied to tunnel openings with good results. Treating tunnel openings during this period can be effective because only one generation of bees is present. Wait 24 to 48 hours after treatment before filling tunnels to ensure that adult bees have had time to be exposed to treated areas. If activity continues, you may reapply dust a second time before filling the holes.