Biology and Management of Japanese Beetle

Japanese beetle were accidentally introduced from Asia to the eastern United States in 1916. Since then, they have established populations in 28 states with detections in an additional 13, becoming a primary insect pest species in many agricultural systems. Japanese beetle feed on over 300 different plant species including fruits, vegetables, field crops, ornamentals, turf grass roots, and numerous wild plant species. 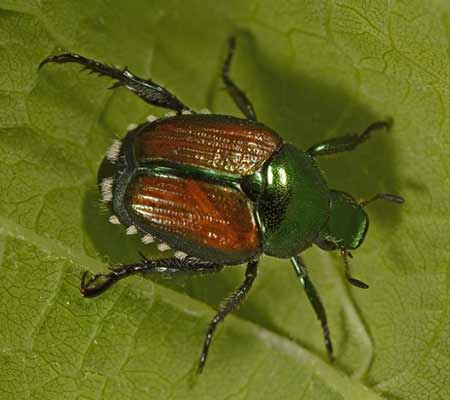 Adult beetles are metallic green, with brown wings (approximately 5–7 mm wide and 8–11 mm long) (Figure 1). Japanese beetle are distinguished from native beetles by the presence of five pairs of white tufts on their abdominal sides and two additional tufts on the abdomen tip.

Japanese beetle have one generation per year (Figure 2). Adults begin to emerge in May and feed on foliage through September. Females lay eggs in soil that hatch within seven to 14 days, and grubs begin feeding on grass roots. Grubs cease feeding in October and overwinter 15 cm below the soil surface (Figure 3). Overwintering grubs move to deeper soil when winter temperatures drop below 8.6 degrees F (-13 degrees C). Grubs begin feeding again in spring after soil temperatures reach 50 degress F (10 degrees C), then pupate, and emerge as adults. 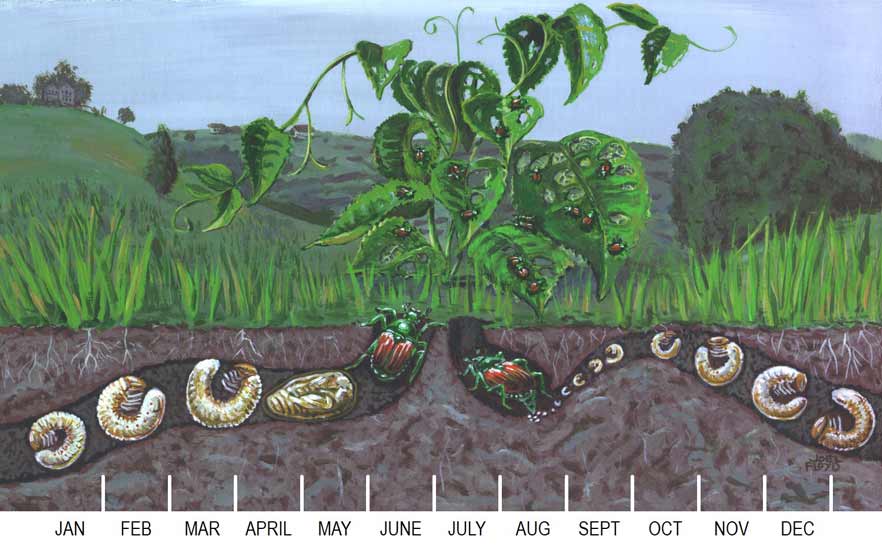 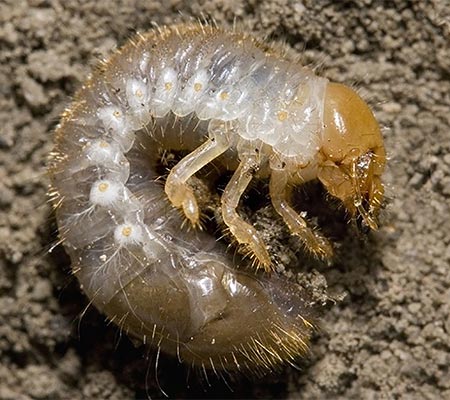 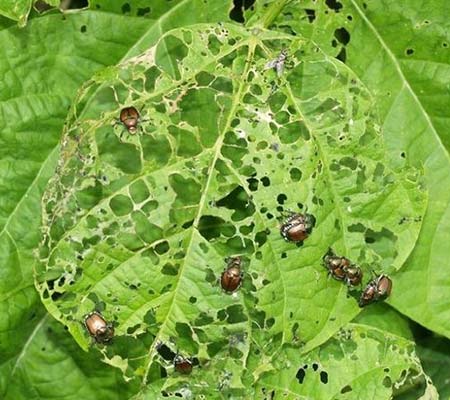 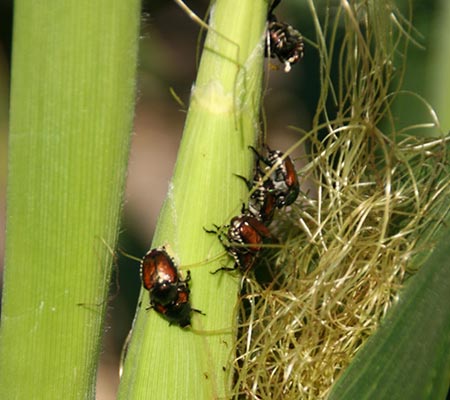 Trapping: Several bag and bucket traps are commercially available that attract and capture adult Japanese beetle using pheromone lures; however, these traps are not recommended for management because they attract more beetles towards traps than they capture, leading to increased plant damage where traps are deployed.

Chemical control: Thresholds have been established for Japanese beetle in several field crops. In soybean, chemical control is justified when plants experience 30% defoliation during vegetative growth and 20% during reproductive growth. In corn, insecticide applications are warranted when silks have been clipped to 0.5 inches, there are an average of three to five beetles on all corn ears, and pollination is less than 50% complete. Should chemical treatment be needed, consult the local extension office and follow label instructions.

Physical control: Place screens/netting over plants after pollination is complete.

Chemical control: While chemicals are frequently applied to reduce beetle damage, they do not prevent additional beetles from reinfesting plants. If using insecticides, contact your local extension office and follow the label instructions.