If you mention mosquitoes, most people are concerned about the annoying buzzing sound they make while flying around looking for a place to land. People might also be concerned about their pesky bite or the irritating skin reaction that follows. However, another reason for concern about mosquitoes is their role in transmitting disease. Several mosquito species are capable of transmitting viruses or other organisms that cause diseases in humans and animals. 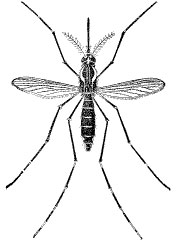 Mosquitoes are small, aquatic flies that belong to the family Culicidae (Figure 1). Only adult female mosquitoes take a blood meal. The blood is needed for egg development. Mosquito species vary in the types of blood they prefer, but most species prefer warmblooded animals. Most of the rest feed on cold-blooded animals, but a few do not take blood at all. Females of these species feed on plant juices and nectar. Plant juices are also the food for males of all species. A few bloodsucking species are active during daylight hours, but the majority of the species that prefer human blood are most active at twilight or just after dark.

Mosquitoes develop in slow-moving or stagnant water. Places where mosquitoes grow and develop are commonly referred to as "breeding sites." The type of breeding site varies by species, but some of the most common include flood waters, woodland pools, edges of slow-moving streams, ditches, marshes and around the edges of lakes. Mosquitoes may also develop in tree cavities, rain barrels, fishponds, birdbaths, wading pools, old tires, tin cans, clogged gutters and catch basins — in other words, anything that holds even small amounts of water for a few days. Flower holders in cemeteries are often overlooked as a source of mosquitoes.

Adult female mosquitoes lay eggs on the surface of water, or in places where water is likely to accumulate. After coming into contact with water, eggs usually hatch in about three days. The larval stage, commonly called a wiggler, usually takes 7 to 10 days to mature and then changes into the pupal or "tumbler" stage (Figure 2). The larval and pupal stages live at the surface of the water and breathe through tiny air tubes that protrude from the water surface, much like a snorkel. The pupal stage lasts two or three days, before the adults emerge. Adult mosquitoes emerge from the pupae by climbing onto the surface of the water. After a few days, the adults mate and females begin looking for a blood meal. After taking a blood meal, each female may lay 100 to 400 eggs or more. The entire life cycle is completed in about two weeks but may take only 10 days under the most favorable conditions.

Missouri is home to approximately 50 species of mosquitoes. Not all of these species are found throughout the state, but many are adapted to survive the hot summers and cold winters typical of Missouri. Some species are active in the spring, some in the summer, and others in the fall, while others are present during the entire nonfreezing portion of the year.

The fact that insects can transmit disease has been known for only a little over 100 years. Before then, it was not known how people contracted malaria, yellow fever, typhus, dengue, filariasis or encephalitis. We now know that mosquitoes transmit various diseases in North America and throughout the world. Depending on the species of mosquito, they may transmit pathogens from human to human, animal to animal, animal to human or human to animal.

Normally, mosquitoes acquire a pathogen from an infected host while taking a blood meal. Once inside the mosquito host, the pathogen must survive until it is transmitted to a susceptible host during a later blood meal. Mosquitoes salivate each time they feed, and transmission usually results from this saliva. Therefore, to be transmitted, the pathogen must survive digestion, pass through the mosquito gut and into the tissues, multiply in the tissues, and finally accumulate in the salivary glands of the mosquito. Since pathogens are adapted for survival and development in certain mosquitoes, only select species are able to transmit a particular disease.

Another common pathogen transmitted by mosquitoes is canine heartworm. Canine heartworm is caused by the filarial worm Dirofilaria immitis. It is by far the most important filarial worm transmitted by mosquitoes in North America. It is most common along the Atlantic and Gulf coasts, where in some localities half the dogs examined are found to be infected. Lower infection rates are found in the Midwest and North-central states. Humans can be accidental hosts but these infections are usually abortive.

The most effective method of mosquito control around the home is to prevent the larvae and pupae from developing. This can be done by eliminating or altering existing breeding sites as follows:

If standing water can't be eliminated, and you have observed mosquito larvae or pupae in the water, there are treatments designed to control these stages. Because mosquito larvae and pupae "hang" under the surface tension of the water while breathing, a thin coat of light oil on the water breaks the surface tension and prevents breathing. These oils should be applied to the shallow margins of the water where there is emergent vegetation, since most of the larvae are located there. They may also be applied to the upwind side of the water so that air currents move the film of oil across the surface. Use only light oils specifically designed for this purpose. Mosquito control supply companies sell such products. Never apply used crankcase oil for this purpose.

Mosquito larvae may also be controlled by applying specially prepared larvicides to the water. Such chemicals include temephos (Abate), Bti, Bacillus thuringiensis israelensis (Teknar, Vectobac) and methoprene (Altosid). These products are available from mosquito control supply companies or from a local home and garden center.

Repellents are useful in protecting against mosquito bites. Available under various trade names, most contain the active ingredient diethyl toluamide (DEET). Repellents provide protection for up to five hours, depending on amount of perspiration, skin rubbing, temperature and abundance of mosquitoes. Protection is rarely 100 percent when one is exposed to a heavy mosquito population. Application should be made to clothing and to exposed skin areas but not around the eyes, nose or lips. Follow carefully all directions on the label. Because repellents with high concentrations of DEET can damage plastics and some synthetic fibers, newer formulations contain about 30 percent microencapsulated repellent. Research has also shown that DEET concentrations above 35 percent are not significantly more effective at repelling mosquitoes.

Other materials may be useful as mosquito repellents. So-called mosquito coils are designed to burn slowly and emit a pungent odor that may keep small spaces temporarily mosquito-free. Avon's Skin-So-Soft products are reported to have some effect in repelling mosquitoes. Other products claiming repellency may or may not be effective.

Mosquitoes can be prevented from entering homes by keeping windows and doors tightly screened. Make sure all exterior screening is in good repair and used regularly. Reduced outdoor lighting at night will also make your home less susceptible to mosquitoes. Similarly, outdoor dog kennels can be screened and lighting reduced.

Space sprays or aerosol "bombs" containing synergized pyrethrins or pyrethroids (several are on the market with various names, usually ending in -thrin ) are effective against mosquitoes found in the home. Use these materials only as directed on the label.

Adult mosquitoes are attracted to light and may migrate in from surrounding areas. During the daytime, adults like to rest in cool, dark, damp and protected locations, such as in vegetation. Therefore, do not allow grass or weeds to grow uncontrolled near the home. Keep shrubs and bushes trimmed and with a space between them and the house. Some localized protection can be obtained by spraying this shrubbery and other shaded areas around buildings with a residual insecticide to kill mosquitoes that attempt to pass the day there. For this purpose you may use an appropriately labeled aerosol insecticide. Some of the active ingredients include carbaryl, malathion and various pyrethroids (again, these ingredients usually end in -thrin). Other products on the market are for use only by licensed applicators. Read the insecticide label before applying to make sure the product is used according to the guidelines and will not harm vegetation to which it is applied.

Temporary control can be achieved with a thermal fogger, a small, hand-held machine that converts a liquid insecticide into a thermal fog. Such a fog will drift with air currents across the ground and through vegetation, providing for quick knockdown of flying and resting adult mosquitoes. This type of control is most effective just before sunrise and just after sundown, when temperatures are cool and when air currents are minimal. Be sure to use only insecticides prepared for use in a thermal fogger. This sort of control may also be useful when outdoor events or gatherings are planned. Since this type of control is short-lived, make the application no more than a few minutes before relief is desired.

It may be desirable to protect your dog from mosquito bites to reduce the threat of infection with canine heartworm. Screening outdoor kennels is one method that has been used to minimize mosquito bites. Another alternative is to contact your local veterinarian, who can prescribe insecticidal treatments for mosquito control on dogs. These products are spot-on, which means you apply a few drops between the shoulder blades or on the back of your dog. The chemical moves through the oils of the skin to provide protection on all areas of the body. These products typically persist for up to a month and kill or repel biting mosquitoes.

"Bug zappers" are advertised as physical attractants or repellents of mosquitoes. Field tests have consistently shown that electrocuting devices using ultraviolet light as an attractant are ineffective in reducing mosquito populations and mosquito biting activity in a given area. They may be spectacular in killing mosquitoes and other insects but they also attract mosquitoes that would not have been in the area normally. Since these electrical devices never get all the mosquitoes present, there will probably be as many mosquitoes left in an area as would have been there if the attracting device had not been used in the first place. In addition, studies have shown that they kill more beneficial insects than mosquitoes and harmful insects.

"Ultrasonic pest eliminators" that supposedly emit a sound or other phenomenon to repel mosquitoes from an area appear on the market from time to time. There is no scientific evidence that such devices have any significant effect on mosquito behavior.

Organized mosquito control in Missouri has traditionally been confined to a few municipalities. However, municipal abatement efforts have become more common recently because of the threat of West Nile virus. An effective program requires the services of specially trained personnel, special equipment and an adequate ongoing budget. Additionally, it requires public understanding and support. Such a program must be thorough and be carried out over the entire area to be protected from mosquitoes. These programs are most effective when they focus on breeding site elimination and treatment of breeding sites, along with adult control. Focus on adult mosquito control without attention to breeding sites is much less effective.