A chigger is the parasitic larval stage of a common mite in the genus Trombicula. Several species of chiggers exist in the United States, but Trombicula alfreddugesi is most commonly encountered. The adult stage is not parasitic and is often seen in lawns and moving across pavement. They are brilliant red and are often called "red bugs" (Figure 1). In Missouri, the adult stage spends its winter in the soil and the females will deposit eggs during the first warm days of spring. Eggs hatch into chiggers that are only about 1/150 inch in diameter. It is this stage that attacks humans and causes so much discomfort. Chiggers crawl about on vegetation, waiting to attach to a host. Rodents, birds, livestock, snakes, toads and other animals serve as natural hosts. Humans are an accidental host. Two to three generations of chiggers are produced each year in Missouri, so the threat of being attacked exists from May until the first killing frost.

In general, chiggers are more common in damp areas with low-growing shrubs, tall grass, weeds and similar foliage. Within favorable habitats, the distribution of chiggers is usually patchy. Individuals are often concentrated in certain areas of the habitat and virtually absent from other areas of apparently equal quality. The unfortunate person sitting in an area with a high concentration of chiggers will be attacked, while someone sitting only a few yards away may not be bitten at all. 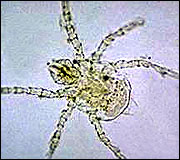 After coming into contact with a human host, chiggers will crawl upward, going under or through clothing until they find an area where clothing fits tightly against the skin. Rather than pass through tight places, they will frequently settle down and begin to feed. They commonly settle and feed in areas such as the tops of shoes and socks, inside tight-fitting underwear under a waistband or bra band, at the back of the knees and in the crotch and armpits.

Chiggers do not burrow into the skin or suck blood. Instead, they pierce the skin with their mouthparts and inject a digestive enzyme. This fluid dissolves the tissues of the host, which are then sucked up by the chigger as food. Within a few hours, tissue around the feeding area solidifies into a hardened tube, called a stylostome. The chigger remains attached to the stylostome and sucks up liquefied tissue — like a person drinking through a straw. Feeding will continue for three or four days if left undisturbed. Itching usually starts within hours, and chiggers are often scratched away before they finish feeding.

Chiggers quickly die if they are dislodged from the host, but the irritation and resulting itch from the bite will continue until the body neutralizes the saliva, dissolves the stylostome and repairs the tissue damage. The dissolved tissue will continue to ooze out of the wound each time the wound is scratched. The fluid that oozes from the wound solidifies into a hard "cap." This cap is a distinct feature of chigger bites and is not associated with the bites of other arthropods, such as mosquitoes.

The best defense against chiggers is to avoid them. Avoid wearing shorts, sleeveless shirts and sandals when going into chigger habitats. Tightly woven fabrics reduce the threat of chiggers penetrating clothing. Tuck pant legs inside boots, and button cuffs and collars tightly to keep chiggers on the outside of clothing. This increases the time that chiggers are exposed to any repellents you have applied to your clothes. Remove clothing as soon as possible after exposure to chigger habitats, and launder it before wearing it again. A warm shower with a vigorous skin massage, taken within an hour or two after exposure, greatly reduces the number of irritating bites. If itching has already started, however, it is probably too late for bathing to do much good.

If you must enter chigger-infested areas, chemical repellents can be used with good results.

These products are generally available at sporting goods stores and outdoor-clothing outlets.

Mowing lawns and removing unnecessary shrubs or weeds will decrease suitable chigger habitats and is the most effective form of area control.

Controlling chigger populations by spraying infested areas has limited effectiveness and gives temporary control of only a few days or weeks, depending on environmental conditions. A variety of over-the-counter products are labeled for chigger control. The active ingredients in these products all end with the suffix -thrin and are similar in effectiveness. If you decide to treat, a single application during late-April through mid-June is best. Treating the entire lawn is of little benefit because chiggers avoid direct sunlight and normally will not infest areas that are mowed or otherwise well maintained. Focus treatment on the unkempt areas of the lawn and lawn edge.

Apply chemicals only where needed or justified. Before using any chemical, read the label carefully for directions on application procedures, appropriate rate, first aid, storage and disposal. Make sure the chemical is properly registered for use on the intended pest and follow all other label directions. Keep insecticides in original containers, complete with labels, and keep them out of the reach of children and pets. Do not allow children or pets near treated areas before these areas dry. Carefully and properly dispose of unused portions of diluted sprays and empty insecticide containers.