Cockroaches are flat, quick-moving insects that are active at night. They prefer to hide in cracks and crevices during the day. Under good conditions, cockroaches can reproduce rapidly (Figure 1). Female cockroaches place 18 to 30 eggs within a protective covering or egg case called an ootheca, which is later deposited in a protected location. A single female may produce 4 to 20 oothecae during her lifetime. The ootheca provides protection for eggs as they develop prior to hatching and emergence of young cockroaches. Cockroaches or their ootheca can be the source of a new infestation, and both are transported easily in grocery sacks, boxes, animal feed sacks or other similar containers.

Young cockroaches are the most active feeding stage in the life cycle. Cockroaches consume a wide variety of foods, including garbage, stored food, feces, greases, food scraps, hair, paper, and dead animal or plant material. They can transport disease organisms from dirty areas like garbage cans and sewers to clean areas. Disease organisms are carried on the outside of the insects' bodies, or they pass through the digestive tract and are distributed with fecal materials. In addition, cockroaches regurgitate repeatedly when feeding, and these secretions will contaminate stored foods. Large populations of cockroaches often produce an objectionable odor, which is a combination of their feces and saliva.

Five types of cockroaches can often be found in Missouri homes. Four of these species, Blatella germanica (German cockroach), Supella longipalpa (brownbanded cockroach), Periplaneta americana (American cockroach), and Blatta orientalis (oriental cockroach) are able to survive and complete their life cycles indoors. Of these, the German and brownbanded cockroaches are considered domestic in that they are most often found indoors. The American and oriental cockroaches are considered peridomestic, meaning they live both indoors and outdoors. The other cockroach, Parcoblatta spp. (wood cockroach), is an outdoor species that finds its way indoors as an incidental invader and will not establish indoor populations. 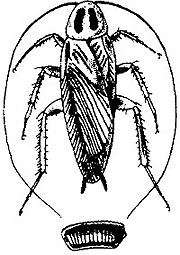 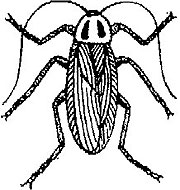 The female German cockroach is unique in that she carries the ootheca for nearly the entire incubation period of the eggs. She drops the egg case in a protected location within 24 hours of the eggs hatching. Normally, 30 to 40 nymphs hatch from each ootheca.

German cockroaches are most common in the kitchen. They prefer to hide under or around sinks, appliances, cupboards and baseboards. Populations of this species usually cluster together in large numbers inside cracks and crevices near warm areas with high humidity. These populations build up in terrific numbers and may also be resistant to certain insecticides. 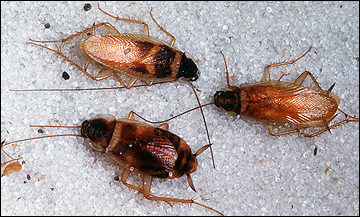 The brownbanded cockroach is about 1/2 inch long and is mostly dark reddish-brown with tan bands running across the body (Figure 3). In adults, these bands are located at the base of the wings and near the middle legs. In nymphs, two light tan bands are located across the midsection of the body. Males have wings that extend past the tip of the abdomen while those of the female are shorter than the abdomen.

Brownbanded cockroach females lay 15 to 20 eggs inside an ootheca and immediately cement it to objects in a protected location. The oothecae are less than 1/4 inch long and barrel-shaped, and a female may produce 10 to 15 during her lifetime. Eggs develop within the ootheca for nearly a month before nymphs hatch.

Brownbanded cockroaches are not limited to warm, humid areas within a building. They may often be found behind picture frames, clocks or other objects on walls or in closets, underneath tables, chairs, cupboards and cabinets. They may also be found inside electronic equipment and in lamps or furniture in dining rooms, bedrooms and living rooms. They usually do not cluster as noticeably as German cockroaches. 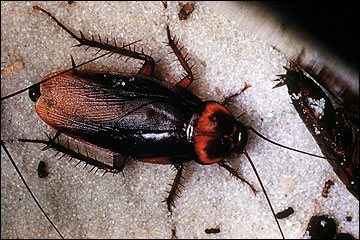 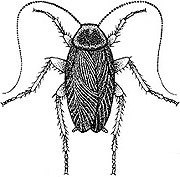 Despite its name, the American cockroach is native to Africa. This is the largest cockroach species that infests homes in North America. Adults are about 1-1/2 inch long and are uniformly reddish-brown over the entire body except for the area behind the head and in front of the wings, which is reddish-brown with a tan margin (Figure 4). The shiny, uniformly colored, reddish-brown nymphs are wingless.

American cockroaches have a relatively long life cycle. Females produce large, barrel-shaped oothecae, which contain 12 to 15 eggs. It takes nearly two months for the eggs to develop before the nymphs emerge from the ootheca. Nymphs take 6 to 20 months to develop, depending on conditions, and the adults usually live for 12 to 15 months.

Although this cockroach can develop in damp basements of homes, it is most frequently found in restaurants, grocery stores, bakeries and other businesses where food is prepared or stored. It is frequently a pest of industrial buildings. It inhabits steam tunnels, sewers and storm gutters. Severe infestations can occur in large apartment houses and commercial buildings where there is easy access to garbage. 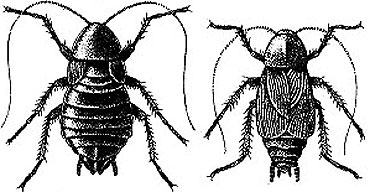 Oriental cockroaches are about 1 inch long and are uniformly dark brown or black in color (Figure 5). Adult females are wingless and are similar in appearance to the nymphs. The adult male has short wings, which do not extend to the tip of the abdomen.

Oriental cockroaches are long-lived. Egg development inside the ootheca takes approximately two months. Development of nymphs takes 6 to 20 months depending on conditions. Adults live 12 to 15 months.

Oriental cockroaches are gregarious and large numbers can be found living together. They congregate both outside and inside homes but are most commonly found in dark, damp basements around drains or leaks in the plumbing. They may move along water pipes to upper floors of apartment buildings. If they locate moist areas, large populations can develop in these areas. 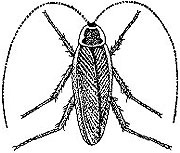 Wood cockroaches are common in Missouri. There are several species, but the most common species is Parcoblatta pennsylvanica. They normally spend their entire lives outdoors, particularly around wooded areas, or in stacks of firewood. Adults are about 1 inch long, dark chocolate brown, with a narrow tan line running along the outside edges of the wings and the area behind the head (Figure 6).

Males of P. pennsylvanica have well-developed wings and are attracted to lights. They often enter houses when they come to porch lights, fall to the ground, and crawl under the door. Females of P. pennsylvanica have short wings. Females rarely enter homes. Nymphs enter homes near wooded areas seeking protection to pass the winter. They are more likely to enter older homes with wood siding.

Consider hiring a licensed pest management professional to handle severe cockroach infestations. They have training, experience and access to insecticides that are not available to the general public. However, if you desire, it is possible to manage cockroach infestations in your own home without using these professional services. There are several important aspects to consider as part of a good cockroach management program.

Sanitation
Although a high level of cleanliness does not guarantee a cockroach-free home, the most important part of cockroach control is cleanliness. Even in the best situations, there are usually enough crumbs to support a small cockroach population. However, the effectiveness of other control methods depends greatly on first maintaining an acceptable level of cleanliness. Cockroaches will eat a wide variety of foods. Food scraps, crumbs, or improper waste management in the home will promote larger cockroach infestations. Damaged or infrequently emptied garbage cans, beverage container recycle bins and other places where food scraps are available make cockroach control difficult by any means.

Maintaining buildings in good physical condition can also reduce the number of cockroaches in the home. Caulking openings to the outside or between units in multifamily buildings will minimize the number of new invaders. Maintaining kick plates under doors can be important. In addition, leaky pipes or condensation, along with a food source, will contribute to larger cockroach infestations once they are established. These conditions should be remedied as part of any sanitation effort.

Monitoring
Control methods may vary with different kinds of cockroaches and it is not unusual to find more than one species in the home. Therefore, it is important to know which species are present and which areas of the home are more likely to support those species. Several brands of glue-board traps are available to monitor cockroaches and reduce their populations. Although effective at monitoring cockroach populations indoors, they will never eliminate an infestation alone.

Baits
Baits have become the most important part of a good cockroach management program. Their widespread use has made cockroach control much easier and safer. You can purchase cockroach bait in ready-to-use plastic stations (disks) or as a granular material that is lightly scattered under appliances, sinks or other areas that are inaccessible to children and pets. Roaches die after consuming these baits. One thorough treatment will usually protect the home for at least two to three months.

Baiting typically depends heavily on good sanitation. This method works best when the primary food source is the bait material. Poor sanitation and the presence of other food sources make control with baits difficult.

Crack/crevice sprays
This includes applying small amounts of insecticide into cracks and crevices, where cockroaches hide, or through which they could enter a building. Cracks and crevices include cracks in or between cabinets, closets, electrical appliances, conduits and equipment legs, behind baseboards, around expansion joints, between different elements of construction, and between equipment and floors. Many ready-to-use insecticides are now packaged with a small, plastic tube to be used as a crack and crevice application device. Professional pest control operators also have application equipment designed for crack and crevice treatments.

Spot treatments
Spot treatment refers to applying an appropriately labeled insecticide within an area that is less than 2 square feet. These treatments are most effective when applied to areas where cockroaches walk while foraging for food. The insecticide residues on the surface will kill the cockroaches upon contact. Entire floors or walls should not be treated, as these areas are greater than 2 square feet. You should treat specific areas, based on the biology of the specific cockroach that is infesting your home.

If you decide it is necessary to treat cabinets or cupboards, remove all of the food and utensils, and wash the shelves with a cleaning solution before applying the insecticide. Allow the shelves to dry thoroughly after the treatment and then cover with fresh shelf paper before replacing food or utensils.

Biological control
Biological control includes using the predators, parasites, or diseases of cockroaches to control their populations. This type of control probably has its greatest potential for use in "highly sensitive" areas where conventional insecticides cannot be used as part of an integrated pest management (IPM) program. For example, a microbial insecticide called Bio-Path is marketed in the form of a chamber containing fungal spores.

*All chemical information is presented with the understanding that no endorsement of named products is intended, nor is criticism implied of similar products that are not mentioned.

Note
The Asian cockroach (Blattella asahinai) was recently discovered in Florida and has received some publicity. It is a close relative of the German cockroach and is indistinguishable from the German to the untrained eye. The Asian cockroach does not occur in Missouri. It is doubtful that it will become a pest here because it is primarily an outdoors species that occasionally enters homes. It probably would not survive Missouri's winters.

Areas of the home to check for German and brownbanded cockroaches