The clover mite, Bryobia praetiosa Koch, is a tiny relative of spiders and ticks. Thousands of clover mites can appear during spring or fall, and they are often found crawling around windows or other areas of a house. Clover mites are distinguished from other species of household-invading mites by their reddish-green color and long front legs (Figure 1). The front legs are as long as the body and almost twice the length of the other legs. These distinguishing features can be seen with the aid of a magnifying glass.

Vast numbers of clover mites can invade a house through cracks and tiny openings around windows and doors. Clover mites do not bite people or pets and do not damage the house or furniture, but they can stain light-colored walls, carpet, fabrics or papers when crushed.

Clover mites are plant feeders, and obtain nutrients by sucking plant juices. They usually prefer clovers and lawn grasses but will also feed on certain ornamental shrubs and trees. An abundance of soil nutrients appears to be linked to clover mite populations. Larger populations of clover mites are often associated with newly established lawns or old lawns that have been heavily fertilized. A heavy growth of well-fertilized grass growing against the foundation of a house is often the source of an infestation. 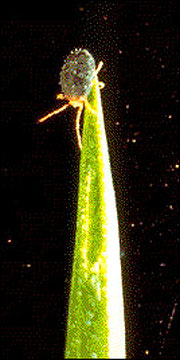 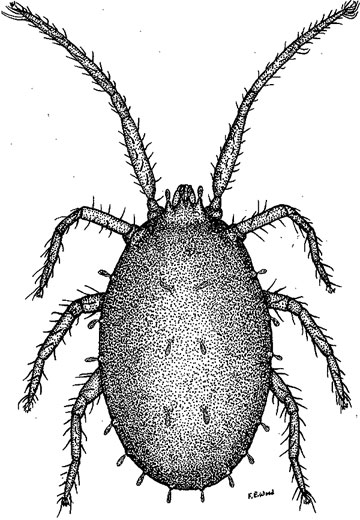 Female clover mites lay bright red eggs in protected areas such as cracks and crevices, where they stay relatively dry. Females lay viable eggs without mating (parthenogenesis); no males are known to exist. The eggs hatch during spring and fall when temperatures are between 70 and 85 degrees F. The resulting offspring are genetically identical to the mother. Clover mites begin to feed on plant juices right after hatching. They progress through four stages of development: larva, protonymph, deutonymph and adult. Only the adults lay eggs. Although clover mites live only a few weeks, usually five or six generations hatch in a year.

Prevention is the most important step in controlling populations of clover mites. Caulking exterior cracks around doors and windows or in the foundation often deters the migration of clover mites into a house.

Creating a zone free of grass and weeds around the foundation of a house can also minimize clover mite invasions. A grass-free zone 18 to 24 inches wide, especially on the south, southwest and east sides of the house, can provide an effective barrier. These areas can be left barren or covered with mulch or pea gravel, which mites have difficulty crawling across. Flowerbeds planted with zinnia, marigold, salvia, rose, chrysanthemum and petunia, or shrubs such as barberry, juniper, spruce, arborvitae and yew make better barriers because these plants are not attractive to clover mites.

If mites do enter the house, vacuuming will collect many of them around windowsills, walls and elsewhere without crushing them. Be sure to seal the vacuum bag before disposal.

When properly applied and maintained, insecticide or miticide sprays can provide temporary control of heavy infestations. However, physical control measures are necessary for longer-term control.