The Hessian fly, Mayetiola destructor (Say), is one of the most destructive pest species of wheat. This insect probably originated in the southern Caucasus region of Russia and was accidently introduced into North America when Hessian troops imported straw bedding during the American Revolutionary War. Hessian flies were first observed on Long Island, New York, around 1779. Today, they are present in most wheat-growing areas of the United States. Around the turn of the 20th century, this insect destroyed millions of bushels of wheat in Missouri.

Hessian flies overwinter as full-grown larvae or maggots inside protective cases called flaxseed because of their resemblance to real flax seeds. Once wheat begins to grow in the spring, adults emerge (usually April) and mate. Adult Hessian flies are small (less than 1/8 inch long), dark (female has an orange-red abdomen), long-legged, two-winged insects that resemble mosquitoes. Even though adults are weak fliers, they can be carried aloft for several miles by strong winds. Once a female has mated, she can lay 250 to 300 eggs in her short life span (4 days or less). The very small, slender, reddish eggs are laid end-to-end in small groups (2-15 eggs). The eggs are deposited in grooves on the upper leaf surface. Females prefer to deposit their eggs on several young plants, but most of the eggs may be laid on a single plant.

After hatching (3-10 days) from their eggs, legless Hessian fly maggots are initially a reddish color before turning a whitish color. They prefer to feed within grooves between the leaf sheath and stem (Figure 1, left). Maggots feed by using their mouthparts like sandpaper on the leaf surface and sucking up plant juices that seep out. They become stationary once they begin to feed and they never cut into the leaf sheath or stem. Depending on the weather, the maggots usually reach their maximum size in two weeks. Then, their outer skin becomes loose and hardens into a brown, protective shell, or "flaxseed" (Figure 1, right) The flaxseed stage persists during the summer until volunteer wheat or early-planted wheat is present. Annually, there are two generations in Missouri unless wet conditions permit an extra spring or summer generation. This insect will also attack barley and rye, but wheat remains its favorite host. 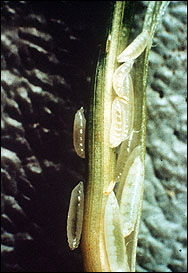 The maggots are the only stage that damages wheat since the adults do not feed. A single maggot feeding on a plant for three days can stunt a young plant or tiller. In the fall, maggots usually feed on the lower leaves and can cause heavy damage. Infested plants become stunted and stiffly erect, and leaves are thickened with a bluish green color. Heavily damaged plants usually die during the winter. Plants damaged during the spring have similar symptoms to those damaged in the fall; however, heavy parasitism (more than 95 percent) usually limits damage during the spring. As the seed heads begin to fill, heavily infested plants will lodge and yields can decline by at least 16 bushels per acre.

When entering a field to check for Hessian fly infestations, identify areas with poor stands or the presence of stunted plants. Closely examine the basal part of the plant (first and second nodes) by pulling the leaf sheath away from the stem to locate the maggots or "flaxseed." It is important to examine several plants in different parts of a wheat field.

Insecticides generally are not recommended for Hessian fly control because of the difficulty of properly timing applications. Applying an insecticide would be helpful when other pest insects (e.g., aphids and grasshoppers) are present along with Hessian flies.

Precaution
Before you select and apply an insecticide, review the manufacturer's label for information on safe use of the material 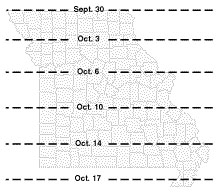 Figure 2
Fly-free dates for Missouri. Wheat seeded on or after these dates should escape damage from Hessian flies in the fall.