The Diatraea grandiosella Dyar, is a very destructive pest of corn, Zea mays (Linné). It costs American corn growers millions of dollars a year in control expenditures and lower yields. This insect was first reported in the United States in 1913, and it now occurs across the entire southern Corn Belt from Arizona to Georgia. It was first reported in southwest Missouri in 1953 and it later invaded the southeastern or Bootheel counties in 1958.

This insect overwinters as a full-grown larva at the base of the corn stalk. The dull white moths with their prominent, snoutlike mouthparts (Figure 1, left) do not feed and prefer to rest during daylight hours on corn plants or border vegetation. After female moths emerge and mate in mid- to late May, they lay their eggs singly or in small masses (3 to 5 eggs per mass) at night. Eggs are usually deposited on the upper leaf surface, and the eggs of the second generation are deposited at the ear zone or a node above or below the ear. A female moth is capable of laying 100 to 400 eggs in her short lifespan (approximately 5 days). Eggs are initially creamy white but develop three red transverse bars within 36 hours of being laid, and these bars remain until the larva's emergence (approximately 5 days).

Southwestern corn borer larvae initially have a reddish color but develop the characteristic off-white coloration and black spots by the second- or third-instar stage (Figure 1, right). Four to six weeks are needed for the southwestern corn borer to complete its development from the egg to adult stage. Full-grown larvae (1 to 1 1/4 inches in length) pupate within the stalk, and those of the second or third generation tunnel down (late August to early October in southeastern Missouri) into the base of the corn stalk to hibernate. These larvae (pale yellow with no spots) eventually construct a hibernation cell close (within 6 inches) to the soil surface. 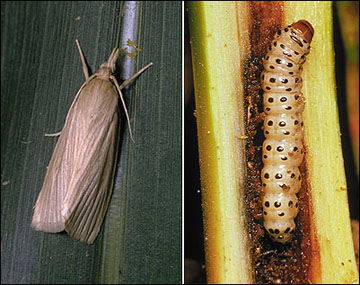 Unlike the European corn borer, Ostrinia nubilalis Hübner, the southwestern corn borer has a limited number of alternate host plants, both cultivated and wild (primarily grass species). Corn is the preferred host because its foliage is attractive for egg-laying sites, and the corn's leaf and stalk tissues permit rapid larval growth. Other host plants in Missouri include milo, Sorghum bicolor, and johnsongrass, S. halepense. Although these alternate hosts can sustain injury, they are more important as reservoirs and overwintering sites for later southwestern corn borer infestations in corn.

First-generation southwestern corn borer larvae initially feed on succulent tissues within the corn whorl. As the damaged leaves unfurl they have a shot-hole appearance, but the most severe injury occurs when the terminal bud is fed upon. These plants later become stunted and bushy with the growth of numerous lateral buds once the terminal bud is destroyed ("dead heart"). Once larvae are half grown, they begin boring into the stalk.

Feeding damage by second-generation larvae typically starts as the corn tassels emerge. The small larvae may feed on the cobs, husks, shanks, leaf sheaths or ear kernels. In field corn, substantial plant injury occurs when half-grown or larger larvae of both the second and third generations bore into the stalk. Before the corn's internodes are fully elongated, stalk feeding by the southwestern corn borer can stunt the plant's growth. As these stunted plants mature, this stalk damage can decrease movement of nutrients to the ears and reduce yields. Later, as the larvae enter their winter hibernation phase, they cause additional damage when they girdle the stalk (Figure 2). This damage leads to lodging and interferes with harvesting practices. 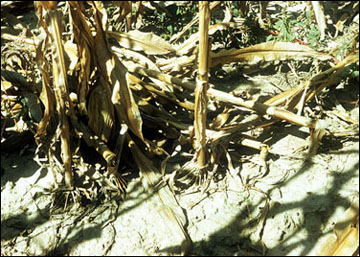 Once moths have been detected (usually late May or early June) in light traps or pheromone-baited traps, cornfields should be scouted on a weekly basis. Closely monitor fields for first-generation southwestern corn borer infestations during the whorl stage. Typically, southwestern corn borer larvae will feed for 11 to 14 days in the inner whorl before boring into the stalk. Windowpane damage (parallel strips adjacent to the leaf veins) to the foliage also is more extensive at this time. Later in the season, southwestern corn borer larvae feed on both ear and leaf sheath tissues after corn plants enter the tasseling stage. After feeding for about 11 days, larvae begin boring into the stalks. The most common site of entry is between the leaf sheath and stalk on the lower half of the plant.

Before you select and apply an insecticide, review the manufacturer's label for information on the safe use of the material. 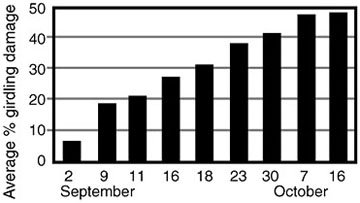 Figure 3
Southwestern corn borer girdling damage for corn planted from April 11 to May 1 at Portageville, Mo.

A significant portion (50-90 percent) of the overwintering southwestern corn borer population is killed by a variety of factors (low winter temperatures, rainfall, diseases and predators). But only 2 percent survival of the overwintering population is needed to restore southwestern corn borer populations to normal levels by the second generation of the next growing season. Either fall or spring (for erodible soils) disking or plowing is an effective means of increasing exposure of overwintering larvae to predators and cold, dry, wintery conditions.

The new Bacillus thuringiensis (Bt) corn hybrids are another option for managing the southwestern corn borer. In several Missouri corn trials, Bt hybrids have yields equal to or greater than conventional hybrids. The Bt hybrids produce a toxic protein that was originally derived from the soil bacterium Bacillus thuringiensis. Growers should note that the current Bt hybrids will not effectively control some pests (e.g., armyworms) and have no activity on other corn pests (e.g., aphids, cutworms, rootworms, wireworms).

Before growers select and plant a Bt corn hybrid, they should first consider two important factors (hybrid selection and refuge fields). First, not all transformations or "events" used to develop the Bt corn hybrids provide equal protection to the southwestern corn borer. For example, BT11 and MON810 events or 'YieldGard' hybrids provide greater full-season protection from southwestern corn borer feeding damage than event 176 hybrids. Second, long-term prevention or suppression of Bt-resistant populations is necessary to maintain the economic viability of this valuable technology. This can be accomplished by planting non-Bt corn that is not treated with foliar Bt sprays as a refuge area. These areas will help produce Bt-susceptible insects that in turn mate with the Bt-resistant individuals and help slow the overall development of Bt-resistant southwestern corn borer populations. It is important to use the same management practices (fertilization, irrigation, etc.) in the refuge and Bt cornfields so that both southwestern corn borer populations emerge at the same time to mate and produce susceptible offspring. The refuge cornfield(s) also should lie in close proximity (less than 1/2 mile) to Bt ones to increase the chances that Bt resistant and susceptible individuals will mate.

The authors wish to thank G. Michael Chippendale (Professor, MU Department of Entomology) and Armon J. Keaster (Professor Emeritus, MU Department of Entomology) for their comments and suggestions of earlier drafts of this publication. We also wish to recognize their many years of research on southwestern corn borer biology and management, and their service to MU and Missouri corn producers.