Starting a Fire in a Wood Stove

For best results in starting a wood fire, you should have a well-thought-out “standard operating procedure.”

How to start a wood-stove fire

Diligent wood-stove operators have all the necessary fire-starting materials readily available at the stove site. These materials include newspaper, 2-inch cardboard strips, kindling, small pieces of cordwood, and matches.

Separate four or five full pieces of newspaper. Bunch and compress some newspapers, and lay them on the bed of the fire box just in front of the door. Lay a few 2-inch strips of cardboard on top of the newspaper, and place several pieces of small kindling wood or dry bark on top of the cardboard. Finally, place one or two small pieces of cordwood split to about a 2-inch diameter on top of the pile. Open the stove vent as far as it will go, and light the fire (Figure 1).

In terms of flammability, cardboard strips about 2 inches wide and 6 to 8 inches long are good materials. You can start most fires without cardboard, but if you have cardboard boxes around the house, this is a useful way to get rid of them. The cardboard cuts up easily if you use a bread knife with a serrated edge. Studies show cardboard probably produces a faster and more positive start up. 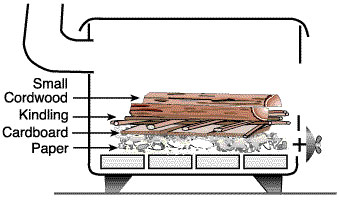 Draw refers to the movement or flow of air from the inside of the house, through the vent and fire box, and up the chimney. Draw is created by physical factors such as differences in pressure or temperature between the fire box and the top of the chimney.

Exceptions to the standard procedure exist. Most of the factors discussed in this section apply to conventional airtight wood stoves but not necessarily to stoves with a catalytic combustor.

Experienced and knowledgeable wood-stove operators know they can be confronted with variable factors when starting a fire. Some variables include:

The three basic elements that control draw in a wood stove and, in turn, control the stove’s ability to heat are:

On a cold, calm day, you may find it difficult to light a fire because there’s no wind passing over the top of the chimney. If you were to try the match flame test, you may find a negative pressure present.

Starting a fire under negative pressure

To start a fire when your wood stove has negative pressure, first ensure you have plenty of dry materials. You must emphasize the large temperature differential between inside and outside temperatures. Remember, hot air rises in a proportionate manner — the greater the temperature difference, the faster the rate of rising.

In this case, rather than trying to start a fire in a conventional way, wad five or six sheets of newspaper, and place the wad below the stovepipe leading into the fire box. Ignite it (Figure 2). The paper will burn rapidly, warming the chimney. This rapid increase in temperature creates a positive draw. Quickly add more paper and fine kindling. This additional fuel heats the chimney more and eventually establishes a favorable situation for a continued fire.

The temperature differential between the inlet air at the vent (assume 70-degrees room temperature) and the temperature at the top of the chimney (assume zero-degrees design temperature) is 70 degrees before the fire is started and is 800 degrees to 1,000 degrees after the fire is established. Once a fire is going and you have accumulated some hot coals, you will find the fire will require more frequent attention on a day of this type. 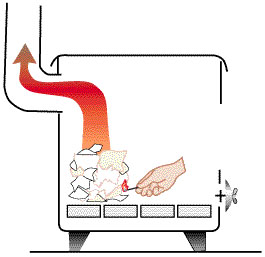 Figure 2
Ignite a wad of paper to start a fire when fire-starting conditions are unfavorable.

Other suggestions and strategies

At night when it is time to go to bed, many people hesitate to put out the fire in their stove because the typical wood stove is hard to relight from scratch in the freezing morning. Instead, they rely on the common trick of banking the fire, which involves slowing the fire to smoldering so they can open the draft in the morning to begin heating the house.