Annual warm-season grasses can be used as part of a year-round grazing system throughout Missouri. With adequate moisture and fertility, they rapidly produce high-quality forage during late spring and summer when cool-season forages are dormant. In addition, warm-season annual grasses work well in rotation with row crops or as emergency pastures. Although many annual crops are used for summer grazing, pearlmillet (Pennisetum americanum), sorghum-sudangrass (Sorghum bicolor) hybrids, and crabgrass (Digitaria sanguinalis) are the most common. Hay-feeding trials at the Southwest Center of the Missouri Agricultural Experiment Station indicate that properly supplemented animals could gain 1.6 to 1.8 pounds per day on sorghum-sudangrass and pearlmillet. Similar data have been reported for crabgrass.

True sudangrasses have been used extensively in the past, but their use has declined with the development of sorghum-sudangrass hybrids. Sorghum-sudangrass is a hybrid developed by crossing forage sorghum with true sudangrass. Forage sorghums are often tall-growing and stemmy. They should not to be confused with milo, which was developed by selecting for short stalks with large heads and a high harvest index. Forage sorghum was crossed with sudangrass to increase leafiness and forage production while minimizing seed set.

There is little difference in yield among sudangrass or sorghum-sudangrass cultivars, and most variation in yield can be attributed to differences in moisture availability. Piper is the most widely used cultivar largely because it is reported to have less prussic acid than other cultivars. Several other proprietary hybrids perform well, so seed cost and availability should be strongly considered when selecting varieties.

Sorghum-sudangrass is intolerant of low soil pH and should be planted only on land with a soil pH above 5.5. It should be seeded during May at 30 to 35 pounds per acre when broadcast onto a prepared seedbed or 20 to 25 pounds per acre when drilled in 7- to 15-inch rows. No-till establishment works well if weed and sod competition are controlled with a burndown herbicide at seeding. 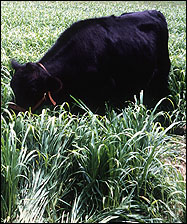 Pearlmillet is an excellent choice for warm-season pasture because it tolerates acidic soils and drought. Unlike sorghum-sudangrass, it does not contain prussic acid. Other millets, such as proso, foxtail or German, are often used in silage or hay mixtures. However, they produce less forage and have a shorter grazing season than pearlmillet.

Pearlmillet is typically drilled at 15 pounds per acre or broadcast into a prepared seedbed at 20 to 30 pounds per acre from May 1 through the middle of June. The major factor limiting the time of establishment after mid-June is the availability of moisture. Therefore, seeding before the beginning of summer is recommended because of the decreasing probability of rainfall as summer progresses.

Widely available cultivars include Tifleaf I, Tifleaf II, Mil-Hy-300 and Sunny State. Like sorghum-sudangrass cultivars, pearlmillet cultivars show little difference in yield. Therefore, cultivars should be selected on the basis of seed price and availability.

Crabgrass at a glance

Although commonly considered a weed in row crops, crabgrass provides high-quality summer forage and grazing. It is gaining popularity because it can be used alone, double-cropped behind winter annual pastures, or used in combination with perennial cool-season grasses. Like pearlmillet, crabgrass does not contain prussic acid.

Although many stands of crabgrass are natural ecotypes, improved cultivars can be established by seeding 3 to 4 pounds of seed per acre in April. Crabgrass seed can be broadcast with fertilizer and then lightly harrowed. Remember that the seed are small and light and will not broadcast farther than 25 feet from most fan-type spreaders. Crabgrass can also be established using a no-till drill, but because the seed are small, they should not be planted deeper than 1/4 inch.

Managed properly, this annual grass can persist as a perennial through natural reseeding. To ensure natural reseeding, livestock should be removed at least 3 weeks before the first killing frost to allow seed to set. The following spring, the ground should be lightly scratched with a disk or harrow in late April or early May to provide adequate soil-seed contact. An application of 40 pounds of nitrogen per acre will speed development of a stand.

Animals perform best on crabgrass pasture if it is grazed rotationally. This allows the producer to keep the forage in a high-quality, vegetative growth stage. Ideally, it should be grazed before it reaches a height of 8 to 10 inches and not grazed to less than 3 inches. Beef cattle have gained up to 2.25 pounds per day on good crabgrass pasture and have repeatedly gained 0.2 pound per day more on crabgrass than on bermudagrass.

Hay curing is difficult with either pearlmillet or sorghum-sudangrass because of large stem size. It is imperative that a mower-conditioner be used to crush the stems to speed drying.

Sorghum-sudangrass can produce 4 to 8 tons of forage per acre when harvested to a 6- to 10-inch stubble. It should be harvested each time the accumulated growth reaches a height of 24 to 36 inches. Maximum yield of sorghum-sudangrass is obtained if stubble height is maintained at 10 inches to allow for regrowth to originate from terminal buds rather than from buds at the base of the plant. 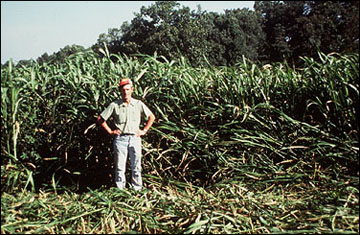 Allowing forage to accumulate above 24 inches will result in stemmy, lower-quality forage. The crude protein content of these grasses falls rapidly after they reach a height of 36 inches and heads begin to emerge. Crude protein content can easily be reduced from 12 to 14 percent in the vegetative growth stages to 6 to 7 percent when the grasses reach the dough stage. Digestibility follows a similar pattern; it will be higher for new cultivars that express a brown midrib trait. The brown midrib indicates low concentration of lignin, which is a part of the fiber that is not digested well.

Key harvest suggestions include the following:

Because of difficulties with hay curing, grazing is the best way to make use of these highly productive forage crops. Grazing trials conducted at the Southwest Missouri Center in the late 1960s and early 1970s indicated that these forages can support average daily gains (ADG) of 1.4 to 1.7 pounds per day over a 90-day grazing season from June through August.

Soils should be tested before establishing pearlmillet and sorghum-sudangrass; phosphorus and potassium should be applied according to test recommendations before planting. These forages respond well to nitrogen and should receive 60 to 90 pounds of nitrogen per acre at establishment.

Both sorghum-sudangrass and pearlmillet have shown yield responses up to 400 pounds of nitrogen per acre. Sorghum-sudangrass tends to yield more than pearlmillet at the same nitrogen rate. Best results are obtained by splitting nitrogen applications such that part of the nitrogen is applied when the crop is established and another 40 to 60 pounds per acre are applied after the first grazing. Split application improves the efficiency of using nitrogen fertilizer, provides more even forage production, and reduces the potential for nitrate toxicity due to overfertilization. Care must be taken with these forages to avoid nitrate toxicity. Excessive nitrogen fertilization is the key cause of nitrate toxicity.

Crabgrass also responds well to high rates of nitrogen application. Studies show that crabgrass responds to nitrogen rates as high as 200 pounds per acre, but most producers apply 70 to 100 pounds per acre per year for maximum economic returns. Nitrogen applications should be split — half when plants begin to grow in May and the rest in early July.

Heavy nitrogen fertilization followed by drought is the most common situation that causes nitrate accumulation in forage. Shading and cool, cloudy weather can also contribute to this problem. These environmental conditions result in nitrate accumulation because growth is limited while nitrate uptake continues. In cattle, nitrates are reduced to nitrite in the rumen. Nitrites are toxic to livestock because they interfere with the ability of blood to carry oxygen.

The rate of nitrate incorporation in plants is regulated by the nitrate reductase enzyme. Molybdenum is a key part of nitrate reductase. If plants are deficient in molybdenum, nitrate reduction is inhibited, potentially resulting in nitrate toxicity. The availability of molybdenum to plants is determined by soil acidity. Liming to desirable pH levels of 5.5 to 6.0 is usually sufficient to overcome molybdenum deficiency and alleviate this potential cause of nitrate toxicity. Nitrates are typically concentrated in the lower portion of the stem, so care should be taken to keep animals from consuming large amounts of the lower part of the stalk of these forages when nitrate concentrations may be high.

If plants contain more than 1.5 percent nitrate (15,000 parts per million), they should be considered toxic to livestock. Nitrates will persist in harvested hay since they do not break down during the curing process. If nitrate accumulation is suspected, forage should be tested before feeding. Pregnant and young animals are particularly sensitive to nitrate toxicity. Care should be taken when feeding forages containing greater than 0.25 percent nitrate (2,500 ppm) as a percentage of dry matter to these animals. Forages containing 0.25 to 0.5 percent of dry matter as nitrate should make up no more than half of the total ration (Table 1). Forages with 0.5 to 1.5 percent nitrate should make up no more than one-fourth of the total ration, and livestock should receive supplemental energy, minerals and vitamin A.

A potential problem with sorghum-sudangrass is prussic acid, or cyanide poisoning. When sorghum-sudangrass plants are injured or under stress, enzymes that convert glycosides to sugar and prussic acid are released. Levels of cyanide greater than 2 milligrams per kilogram (2 ppm) of dry plant tissue are considered potentially dangerous. Prussic acid is readily absorbed into the bloodstream and causes toxicity by blocking normal cellular respiration in the animal.

In addition, prussic acid levels are highest in young, leafy tissue, whether it is initial growth after planting or regrowth after clipping. Since it is the young, fast-growing tissue that contains dangerous levels of prussic acid, avoid grazing until the plant reaches a height of at least 24 inches to allow prussic acid to dissipate. Unlike nitrates, which are persistent, prussic acid disappears during the hay curing or ensiling process.

Prussic acid can be detected through the use of picrate strips. Filter paper that has been treated with a solution of picric acid and allowed to dry is suspended in a test tube over a sample of plant material that has been treated with a few drops of chloroform. The test tube is then incubated for several hours. If prussic acid is present, the yellow sodium picrate paper will turn increasingly red in direct proportion to prussic acid concentration.

Liz Sterling contributed to the development of this publication.