Trefoil is especially adapted to Shelby and Grundy soil types and other similar soils of northern Missouri. A major problem has been the difficulty of obtaining good trefoil stands. Its high requirement for light during the first 60 to 90 days after seeding is largely responsible for this. This can be overcome by band-seeding well inoculated trefoil seed in a partially tilled bluegrass sod during late February or early March.

Seed 4 to 6 pounds of Dawn or Empire trefoil in late February or early March. Damage from frost is not as severe a threat to the new seedings as competition from weeds if the trefoil is seeded later. 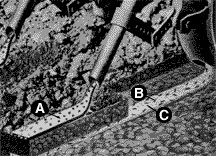 Seeds placed over bands of phosphorus will grow rapidly and develop strong root systems. They will survive competition from grass, weeds and drought better than broadcast seedings.

Take off the drag chains; they scatter the seed away from the fertilizer. The new seeding may be packed or rolled, but if the seeding is made early, it is not necessary. Freezing and thawing will soon cover the small trefoil seed with soil.

Let the new trefoil rest throughout the month of September and early October. This is a critical time in the life of a trefoil plant. The growth that occurs during this period may be used during late October and November.

Chemical weed control is excellent for successful seeding trefoil in an established grass sod. However, Eptam or Balan will kill new seedlings of other grasses such as timothy or orchardgrass if seeded with the trefoil. Post-emergence 2,4-DB may be safely used on grass-legume mixtures for broadleaf weed control without harming the new seedlings.

Avoid using oats or wheat when seeding trefoil unless the companion crop can be removed by grazing.