Feeding hay to cattle is expensive. Recent analyses show that hay costs between $0.02 and $0.07 per pound of dry matter; usually more than double the cost for the same amount of nutrients from pasture. Hay is expensive because:

This guide focuses on the last of these expenses — losses associated with feeding hay. 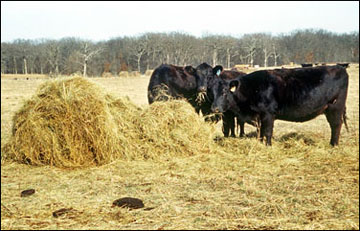 Figure 1
Losses can run as high as 50 percent if hay is not fed properly.

No matter how hay is packaged, if you waste it, you lose money. Below are some general rules that can help minimize waste during feeding.

Large bale systems are designed to minimize labor, not waste. It is important to remember that outside storage of large bales will increase hay losses due to weather-related spoilage. Spoiled, rotted, or moldy hay is often refused by all but the hungriest of cattle and will result in more waste during feeding.

The simplest system for feeding large round bales is to set the bale in the pasture or feeding area where the stock have free access to hay. This system does not require the purchase of any extra equipment for feeding, but it is prone to high feeding losses. Losses are greatest when a several-day supply of hay is fed at one time. Feeding a one-day supply of hay each day minimizes waste but increases labor costs. When feeding large round bales without a ring or rack, a good way to estimate how many bales to have available each day is to figure one cow per foot of outside diameter of the bale. Even then, feeding losses can be excessive.

A better system for feeding large round bales is to set the bale in the pasture or feeding area but limit access to the hay with a rack or hay ring (Figure 2). This system requires an initial investment in hay racks or rings (hay rings usually cost about $125 each), but feeding losses are low, even if a seven-day supply of hay is left at one time (Table 1). Feeding hay in racks or rings is crucial for producers who do not or cannot feed hay to their cattle on a daily basis. 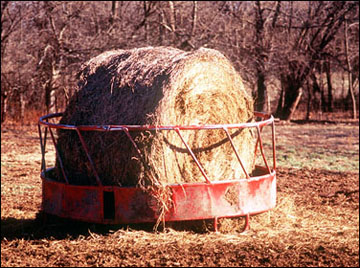 Figure 2
A hay ring permits feeding of large round bales in the field with minimal loss.

*Bales spread or unrolled across pasture

When hay rings are used, you need to consider the space available around the feeder. Most hay rings have enough space for approximately 10 cows at a time. The more aggressive cows will eat first and consume the more desirable hay. Cows that are more timid will be forced to eat the lower-quality material or go hungry. To make the most efficient use of hay rings, you may need to purchase several rings and feed more bales at one time.

As an example, a 30-cow herd would consume one 900-pound round bale per day. To feed a 30-cow herd, we could use one hay ring that is filled daily. But a better alternative would be to use three hay rings that are filled every three days. This gives every cow in the herd an opportunity to get the hay she needs, in addition to cutting labor costs. Similar calculations can be used with other types of hay feeders.

The MU Forage Systems Research Center has developed a low-labor system for feeding large round bales in hay rings (Figure 3). In this system, the bales are grouped in a corner of the pasture before winter feeding time (often at harvest) to reduce labor, tractor use, and pasture damage from running trucks or tractors during muddy conditions. Bales are spaced on 20-foot centers. The number of bales per paddock is based on bale size, herd size and planned length of stay. Using our earlier example of a 30-cow herd, we would need one 900-pound bale per day. So placing 10 bales in a paddock would supply about ten days' worth of feed for a 30-cow herd, five days of feed for a 60-cow herd, and so on. 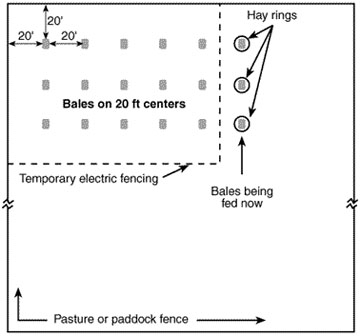 Figure 3
Group large round bales on 20-foot centers in a corner of a pasture and enclose them with a movable electric fence. Feed the bales in hay rings and move the fence and rings as needed.

The bale storage area is blocked off with electric fencing. When the hay is needed, the fence is moved and rings are placed around a two- or three-day supply of hay. This process allows cattle access to ample feed, minimizes waste and still allows for the distribution of manure over several paddocks. One big advantage of this system is that a three-day supply of hay for 50 cows can be fed in about 15 minutes. This system works well with management-intensive grazing systems where bales are stored in several paddocks.

Another popular system is to unroll the bale and feed it on the ground as loose hay (Figure 4). In addition, several equipment manufacturers sell "bale processors" that chop hay and deposit it in a windrow for feeding. Both of these systems are labor intensive and can result in high trampling and soiling losses if too much hay is fed at one time. If a three-day (or longer) supply of hay is unrolled or "processed" and left for cattle to consume on their own, feeding losses of 40 percent or more can be expected. However, if fed on a daily basis, feeding losses run about 12 percent. One advantage of unrolling or processing bales is that it gives you the opportunity to move the hay feeding areas around the pasture and distribute manure and nutrients evenly over a large area. 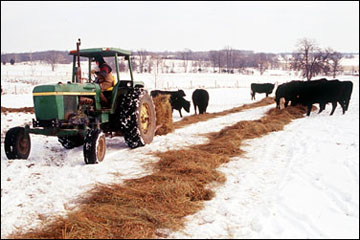 Figure 4
When large round bales are unrolled and fed on the ground as loose hay, losses as high as 40 percent can be expected.

Despite these advantages, this system is impractical for small hay producers because the equipment requires an initial investment of $60,000 to $100,000. 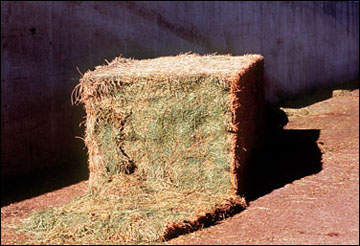 Figure 5
Large square bales can be efficiently transported and handled but require a large initial investment in equipment.

In Missouri, producers most often feed large square bales in racks or bunks or they grind the bales for inclusion in a total mixed ration (TMR). As with big round bales, allowing cattle free access to these bales will increase waste, because it usually provides too much forage at once and excess hay is trampled, soiled and left uneaten. A good way to feed these bales is to place them in specially designed racks with solid bottom guards or to use collapsible racks or fencing that will limit access to the hay. A second alternative is to "flake" and scatter the hay on the pasture, although feeding losses can be excessive if too much hay is fed at one time.

Formed haystacks have declined in popularity over the past 15 years. As with large round and large square bales, formed haystacks are designed to minimize handling and feeding costs. The stacks are often as large as 12 feet tall and contain 3 to 6 tons of hay. These bales are usually fed in one location with some sort of movable fencing or compressing gate system. Another inexpensive yet effective system is to use an electric fence to limit access to the bale. The size of the stack should provide enough hay for the herd to consume in a single week or less if no feeder or barrier system is used. Even then, feeding losses will be high. Because these stacks are usually fed in place, the feeding area often becomes muddy. Selecting a well-drained site for storage and feeding is critical.

Feeding small hay bales is labor intensive but reduces waste if fed properly. Small hay bales can be fed intact, in bunks or racks or spread throughout the field. Since you usually have greater control over the amount of hay available to the cattle, these bales often have low trampling and soiling losses.

Small round bales (usually weighing 100 pounds or less) are inexpensive to feed and are usually left in the field after baling. The downside to this sort of bale, often called a "rotobale," is that the equipment is not manufactured anymore and it is low capacity.

Producers often feed these bales in conjunction with stockpiled tall fescue. Access to the bales must be limited in some way or cattle will quickly destroy and waste much of the hay. This is very important. Using electric fencing or other barriers to prevent access to more than a one- or two-day supply of feed can cut waste threefold (Table 1). 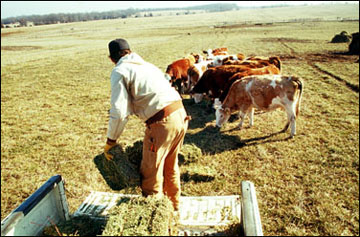 Figure 6
To minimize losses with small square bales fed on the ground as loose hay, distribute daily amounts throughout a pasture.

No matter what size hay package or feeding style you use, some hay will be lost or wasted. Proper feeding management minimizes these losses. Since hay is some of the most expensive feed used on beef operations, it makes sense to try to keep waste as low as possible through good management practices.