In Missouri, blister beetles are an infrequent pest of alfalfa. When present in sufficient numbers, however, the consequences can be serious. These insects cause only limited plant damage to alfalfa and soybeans.

But when ingested by livestock, especially horses, the animals may become sick and even die. These insects produce a highly toxic drug called cantharidin. 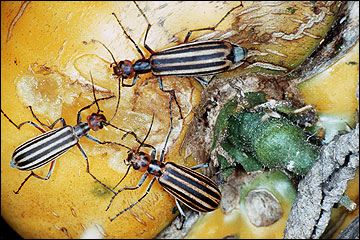 Striped blister beetle, Epicauta vittata, and other species of blister beetles, may occur in large numbers within localized areas of soybean and alfalfa fields during July and August. Rapid defoliation can occur, but the real problem with blister beetles is that they produce cantharidin, a toxin which, when ingested by horses, can cause the animals to become sick and possibly die.

Blister beetles are in the family Meloidae and are common throughout the United States. In Missouri, several species may be found feeding on alfalfa during the growing season.

These beetles range from 1/2 to 1 inch in length and are readily recognized by their characteristic shape; narrow, cylindrical, soft-body with a distinct "neck-like appearance" when viewed from above. Their colors range from black to gray to brown and some species have orange stripes. The striped blister beetle, Epicauta vittata, is most frequently associated with sickness in Missouri livestock.

Most blister beetle species have one generation per year. Females lay eggs in soil from late summer into early fall. Eggs are laid in clusters and hatch in about two weeks. The larvae move over the soil and find grasshopper eggs on which they feed. Larvae develop through several stages until in the last or next to last stage they form a thickened skin which will protect them during the winter. These larvae overwinter in the soil, pupate the following spring, and depending on the species, emerge from the soil in June, July, or August. Adults then feed, mate, and lay eggs for the next generation.

In Missouri, few if any blister beetles are present in the first cutting of alfalfa, but may be common in alfalfa harvested during July or August. These beetles are attracted to flowering vegetation and frequently feed on foliage, pollen, and nectar of alfalfa, soybean and weed plants. The effects of this feeding are usually minor.

These insects are very mobile and congregate in large numbers in small areas of the field. This habit makes them easier to locate in an alfalfa field, but also increases the chance of harvesting large numbers with the hay. The cantharidin produced by the beetles is a very stable toxin. Even the dried remains of beetles in hay are toxic to livestock.

Horses are most susceptible to this toxin. Cantharidin is absorbed and excreted through the kidneys, causing irritation or serious damage to the stomach lining, small intestine, kidney, ureter, urinary tract and urethra. The reaction depends on the number of beetles consumed.

Researchers have determined the lethal dose of cantharidin is about 1 milligrams per kilogram (2.22 pounds) of cantharidin per horse body weight. In addition, an average content of 5.0 milligrams. of cantharidin per insect has been found for the striped blister beetle, the most common blister beetle in Missouri alfalfa. Although many factors can influence the number of beetles necessary to cause horse mortality, calculations indicate that a minimum of 30 to 50 striped blister beetles would need to be eaten in order to kill a normal sized, healthy horse. However, as few as two to five blister beetles may cause colic in horses. Even though no actual beetles have been ingested, the dried juices from crushed beetles on the hay may cause symptoms.

Symptoms of blister beetle poisoning vary considerably, but may include ulcerations of the mouth, frequent play in water with lips and tongue, colic, pawing, frequent attempts to urinate, stretching, jerking contractions of the diaphragm, diarrhea, discarded intestinal tract lining in the stool and reduced levels of calcium and magnesium in the blood.

Any horse showing these symptoms should be immediately examined by a veterinarian.

The forage the animal was eating should be inspected for the presence of blister beetles.

Beef cattle and sheep are less susceptible to cantharidin poisoning, but may experience symptoms if they consume high numbers of blister beetles. Little is known about the effect of cantharidin on lactating dairy cows.

Several changes in alfalfa management can help reduce the number of blister beetles found in baled hay, but none will eliminate the problem. Management options include:

Remember, these management practices can only reduce the number of blister beetles present and the subsequent risk of cantharidin poisoning, not eliminate the problem.