Alfalfa is a high-quality, high-yielding, cool-season forage that can be profitably marketed as hay. Alfalfa is a desirable crop for manure applications because:

Manure can be an excellent source of P, K and boron for alfalfa production and can reduce the need for purchasing other sources of these nutrients. Research in Wisconsin and Minnesota has shown manure can sometimes improve alfalfa yields when compared with other fertilizer sources. However, there are significant challenges in managing manure on alfalfa without damaging the productivity of the stand, particularly with solid manure and manure slurries.

This guide introduces factors producers should consider before applying manure on alfalfa.

Applying manure before planting is an excellent way to use manure for alfalfa production while avoiding many problems associated with surface application on established stands. This method requires incorporation of sufficient manure to meet soil test P or K recommendations for two to three years. After planting, no further applications of manure or commercial fertilizer are needed until the third or fourth year.

Manure applied before planting must be incorporated into the soil either through injection or tillage. The alfalfa seed should not be in direct contact with a manure layer during germination, and the seedling should not grow through a layer of manure at the soil surface.

Alfalfa is one of the most sensitive forages to low soil pH and requires a soil pHs (salt extraction pH) above 6.0 (6.5 in the Ozark region of the state). On low pH soils, apply lime at least one year before planting alfalfa to allow time for it to react with the soil.

Established alfalfa stands require 1 pound per acre of boron each year. Do not apply boron in the seeding year because boron can be toxic to seedling alfalfa.

Alfalfa does not require nitrogen fertilizer for establishment or yields because it can fix atmospheric nitrogen through a symbiosis with microorganisms in the soil. However, initial harvests can yield higher with a 20 to 30 pounds application of nitrogen at seeding.

Mismanagement of manure can damage or kill an alfalfa stand. The greatest concerns are surface-applied solid or slurry manure to established alfalfa stands and any form of manure applied during establishment of alfalfa.

When manure slurry or solid manure is applied to established alfalfa stands, the following precautions should be used to minimize potential damage to the stand.

Lagoon water from unagitated lagoons is unlikely to damage established alfalfa stands. Swine and dairy lagoon effluent typically has lower ammonium and salt concentrations than slurry. Salt strength in manure is estimated by measuring electrical conductivity (EC). Effluent from properly functioning anaerobic lagoons usually has an EC less than 15 mmhos per centimeter. Experience has shown that effluent from these properly functioning lagoons does not damage established crops. Typically, no more than two inches of lagoon water should be applied per year to established alfalfa stands. Do not apply lagoon effluent to seedling stands of alfalfa because it promotes weed competition and because the plants are more sensitive to possible salt effects from the manure.

Alfalfa stands thin each year without necessarily reducing yield. Each crown has the ability to develop additional tillers to fill gaps in the stand. This tillering process compensates for natural crown thinning as well as for some stand reduction that occurs from manure application.

Manure has a reputation for increasing weed pressure in alfalfa. Manure can contain weed seed, so manure application may increase weed establishment. In addition, manure contains high levels of N, so manure application can stimulate competitiveness of weeds. Research from Wisconsin and Minnesota suggests weed problems that may occur will be most severe during the seeding year. Producers should be prepared to manage the increased weed pressure with timely harvests or herbicides.

Fate of nitrogen applied to alfalfa

Alfalfa, as a legume, can fulfill most of its nitrogen requirement from a process called symbiotic N fixation. However, the amount of nitrogen fixed by this process is inversely related to the amount of N available to alfalfa from other sources. Therefore, the more manure or fertilizer N applied, the less alfalfa depends on N fixation to meet its N needs. Alfalfa preferentially uses N from the soil and from applied sources such as manure, and uses nitrogen fixation to meet any additional nitrogen need." These characteristics, combined with high yield capability, make alfalfa hay an excellent crop for removing large amounts of nitrogen from the soil.

In the harvested hay, nitrogen taken up from manure will not exceed 70 percent of the total N removed. The rest of the nitrogen will come from organic matter and atmospheric deposition, which together can contribute 30 to 50 pounds N per acre per year to the crop. Symbiotic nitrogen fixation will contribute 10 to 25 percent of the N in alfalfa herbage, even at high N application rates.

Manure is an unbalanced fertilizer

If application rates of manure are based on one nutrient, other nutrients are likely to be overapplied or underapplied. For example, a 4-ton alfalfa crop will remove 200 pounds N per acre in the hay. At the same time, it will remove far less P and K; a 4-ton hay crop will remove only 40 pounds P2O5 per acre (18 pounds P per acre) and 180 pounds K2O (150 pounds K per acre). Most manure sources contain more P2O5 than is removed by the crop at the N removal application rate (Table 1).

Table 1
The estimated amount of N, P and K applied when manure application is based on the N removal rate of alfalfa. (Assume 4 ton per acre yield x 50 pounds per acre N removal = 200 pounds N per acre removal rate.)

Note
Available manure N, P2O5 and K2O content was estimated assuming surface application. Actual loading rates for your field should be based on manure testing and nitrogen availability calculations appropriate for your method of application.

If phosphorous is applied at rates higher than crop needs, soil test P will increase (Figure 1). On soils with low to medium soil test P, buildup applications of P can be desirable. However, too much buildup can raise soil test P to excessive levels (Figure 1). Continued application of P serves no agronomic purpose on these soils. High soil test P soils require careful management to minimize P losses to lakes and streams in runoff and erosion. 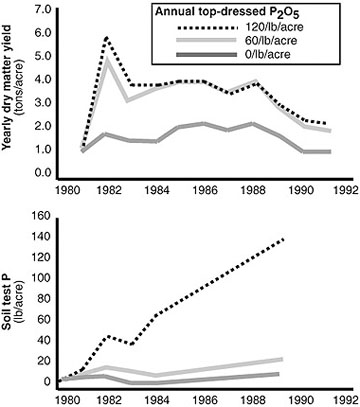 Manure application rates based on the annual P requirements of alfalfa hay will not provide sufficient K. Supplemental applications of K as commercial fertilizers will be necessary unless K is in the "very high" soil test category. Phosphorus-based application rates rarely exceed the nitrogen assimilation rate of alfalfa. Exceptions will be some swine lagoon effluent sources that are injected into the soil.

Careful consideration must be given to management strategies for alfalfa. When an old alfalfa stand dies, the field must be rotated to another crop for at least one year before re-establishing alfalfa. This is because of autotoxicity, a process by which alfalfa secretes compounds that are toxic to its own seedlings. In Missouri, these water-soluble compounds will normally leach out of the soil in a 12-month period.

Crops in the year following alfalfa will have a reduced need for nitrogen. Alfalfa is one of the few crops that build up available nitrogen in the soil. In addition, the decomposing alfalfa residue and residual contributions from manure make nitrogen response of crops such as corn unlikely. The nitrogen value of alfalfa to the subsequent crop persists even in stands with a high percentage of grasses. Select a crop such as corn that is capable of using the flush of available N following alfalfa to minimize the potential for leaching excess nitrogen to groundwater.

There are advantages of including a grass in an alfalfa stand. Grasses can increase plant density, thereby improving ground cover to curb soil erosion and weed establishment. In addition, alfalfa-grass mixtures can reduce insect infestations. Recent research at MU has shown that leafhopper invasions are less likely in alfalfa/orchardgrass mixtures than in pure stands of alfalfa. Mixed swards may be less desirable on fields receiving manure because manure N will accelerate grass competition with the alfalfa.