Asian soybean rust is a serious foliage disease that has the potential to cause significant soybean yield losses. Although Asian soybean rust was identified on soybean plants in Hawaii in 1994, the disease was not reported in the continental United States until the fall of 2004. The U.S. Department of Agriculture (USDA) released an official notice of the confirmation of soybean rust on soybean leaf samples collected in Louisiana on Nov. 10, 2004. Over the next few weeks the fungus was detected on plants from a number of additional states, including Missouri. Now that Asian soybean rust has been found in the continental United States, it is critical that anyone involved in soybean production be familiar with the disease and its identification and management.

Phakopsora pachyrhizi, referred to as the Asian or Australasian soybean rust, is the more aggressive pathogen. It was first reported in Japan in 1902 and was initially limited to tropical and subtropical areas of Asia and Australia. Unfortunately, it is Phakopsora pachyrhizi that has been spreading through soybean-producing regions of the world. Phakopsora pachyrhizi was reported from Hawaii in 1994, Zimbabwe in 1998 and Paraguay in 2001. In Africa, this aggressive soybean rust has spread to Uganda, Zambia, Rwanda, Nigeria, West Africa, Mozambique, South Africa and Cameroon. In South America, Phakopsora pachyrhizi has been found in most of the soybean-producing regions of Brazil as well as Argentina, Bolivia and Colombia. It was also the aggressive, or Asian, soybean rust that was found in Louisiana, other Gulf Coast and southeastern states and Missouri during the fall of 2004. 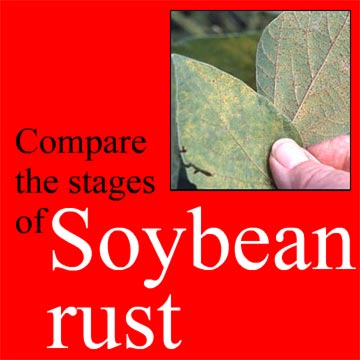 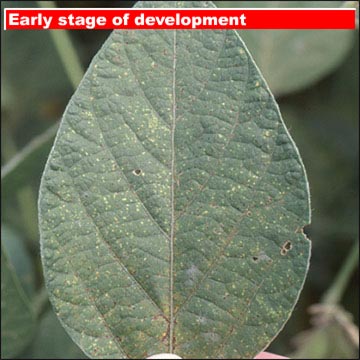 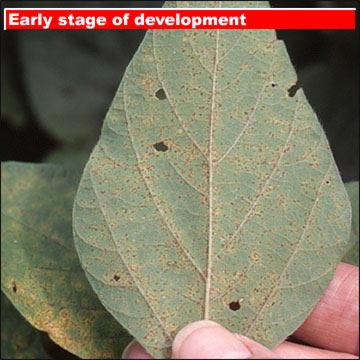 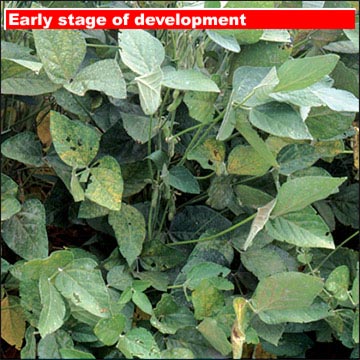 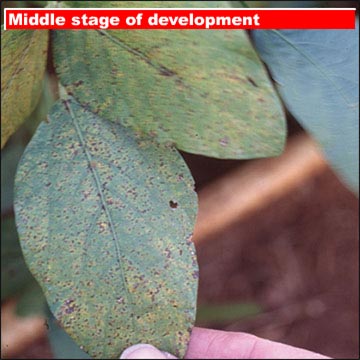 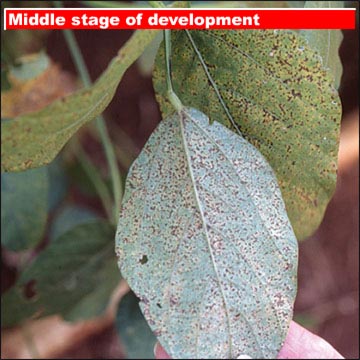 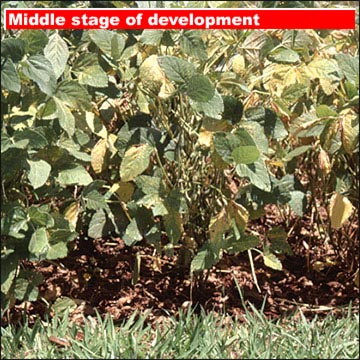 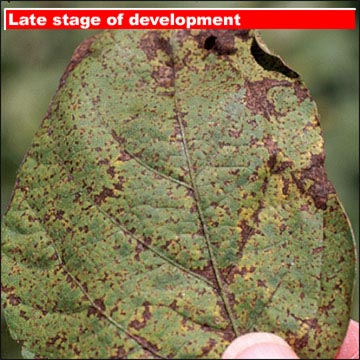 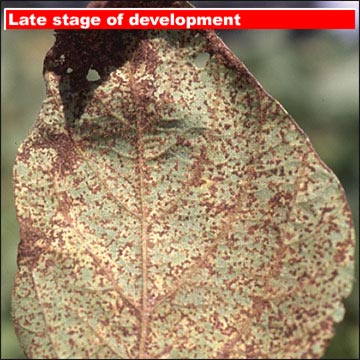 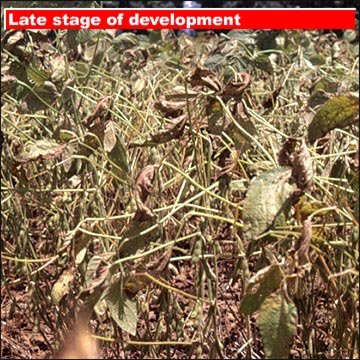 Figure 1
Soybean rust, especially in early stages, can be difficult to identify. Examine both upper and lower leaf surfaces, starting with leaves in the lower canopy of the plants.

The two types of soybean rust cannot be distinguished by foliar symptoms in the field. The initial confirmation of soybean rust and the determination of which type of soybean rust was present in samples collected in the United States during the fall of 2004 was done by USDA Animal and Plant Health Inspection Service (APHIS) personnel in Beltsville, Md., using molecular techniques.

The most common symptom of soybean rust is a foliar lesion (Figure 1). On the upper leaf surface, initial symptoms may be small, yellow flecks or specks in the leaf tissue. These lesions darken and may range from dark brown or reddish brown to tan or gray-green in color. The lesions tend to be angular to somewhat circular in shape and may be concentrated near leaf veins. Initially the lesions are small, barely larger than a pin point (Figure 2). Mature lesions (Figure 3 and Figure 4) may be somewhat larger, and lesions may merge or run together, killing larger areas of leaf tissue. Symptoms may be more prevalent and more severe on the lower leaf surface. The fungus produces spores in cone-shaped pustules on the lower leaf surface. At first these pustules might appear to be small, raised blisters or callous bumps on the lower leaf surface. But as the rust pustules mature, they begin to produce large numbers of light-colored, powdery spores (urediospores), which emerge through a distinct hole or pore in the cone-shaped pustule. Masses of the light-colored (gray to buff to light tan or brown) spores may lodge in the opening or mound up out of the opening in the pustule (Figure 5). The pustules and emerging spores are difficult to see without magnification. A high-power hand lens or dissecting microscope will greatly aid in the detection of these structures and in identification of soybean rust. 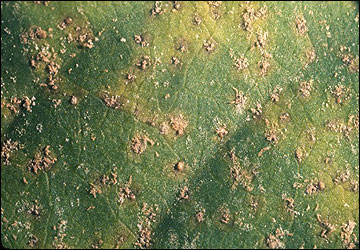 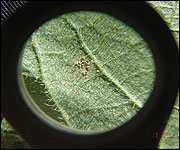 Rust pustules are most common on the underside of leaves but may also develop on petioles, pods and stems. Infected leaflets may show a yellow mosaic pattern. Leaves may yellow and drop prematurely. Losses are due to a reduction in photosynthetic area of the plants and resulting reduction in pod and seed numbers and in seed weight.

Soybean rust is usually found first on the lower leaves of plants, especially at or near flowering. As the soybean plants mature, lesions may be found in the middle and upper canopy. When conditions are favorable for disease development, yellowing of the foliage may be evident and defoliation and premature death of plants may occur. Under ideal conditions the disease can develop on much younger plants.

The development of soybean rust is favored by prolonged periods of leaf wetness (6 to 12 hours) and temperatures of 46 to 82 degrees Fahrenheit. Extended periods of cool, wet weather during the growing season would favor soybean rust epidemics. Rust pustules appear on the leaf surface 9 to 10 days after infection, and spores are usually evident soon after. Each lesion can produce vast numbers of spores and spore production may continue for weeks. Spores are easily spread by the wind. Soybean plants are susceptible to soybean rust at any stage of development, but symptoms are most common during and after flowering.

Rust pathogens are considered to be obligate parasites in that they survive on living plant material. Although the soybean rust fungus may not be able to overwinter in central or northern soybean-production areas of the United States, it may be able to survive the winter months on hosts such as kudzu in the southern United States. Soybean rust spores could then be carried north on wind currents and by storms. This scenario of reintroduction of rust pathogens from the southern United States to the central and northern regions of the country each growing season is well documented in wheat for stem rust, leaf rust and stripe rust and in corn for common rust and southern rust.

The soybean rust fungus has several characteristics that make it a serious threat to soybean production. As with most rust fungi, the soybean rust produces large numbers of spores on infected plants. These spores are readily spread by wind currents and storms. This combination of high spore production and successful long-distance spore spread allows soybean rust to buildup rapidly and makes it a difficult pathogen to control. Soybean varieties grown in the United States have little or no resistance to soybean rust. In addition, the soybean rust pathogen Phakopsora pachyrhizi has many other cultivated and uncultivated or wild hosts. At least 31 species in 17 genera of legumes can be hosts of this fungus. Among the other hosts of Phakopsora pachyrhizi in the United States are kudzu, yellow sweet clover, medic, vetch, lupine, green and kidney bean, lima or butter bean and cowpea or black-eyed pea.

For the immediate future, the use of foliar fungicides may be one of the main tools for managing soybean rust. Currently only a limited number of foliar fungicides are labeled for use on soybeans in the United States. Section 18 special exemption registrations have been requested for additional fungicides and more are likely to be requested. Check with MU Extension personnel or the Missouri Department of Agriculture for current information on fungicides labeled for use against soybean rust.

Early detection followed by prompt application of fungicides in a manner that ensures good coverage of the plant canopy will be necessary for successful management of soybean rust. The number of fungicide applications required will vary depending on how early in the season rust spores reach Missouri and on weather conditions during that growing season. There are still many questions concerning the effective use of fungicides to manage soybean rust.

Answers to questions about how various agronomic practices such as row spacing, date of planting, and irrigation techniques affect the development of soybean rust are also unclear. Practices that minimize conditions favorable for rust development and optimize crop vigor need to better defined.

It is difficult to predict the impact soybean rust on Missouri producers. Soybean rust has the potential to reduce yields significantly, to increase production costs and to reduce profits. However, the severity of the disease in Missouri could vary greatly from season to season. Weather conditions that promote introduction of rust inoculum from the southern states and weather conditions that favor development of the disease during the growing season will determine how severe soybean rust is each year. 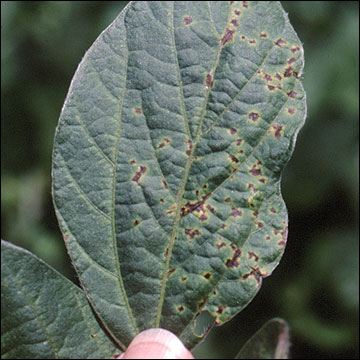 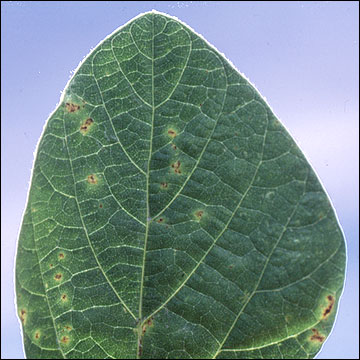 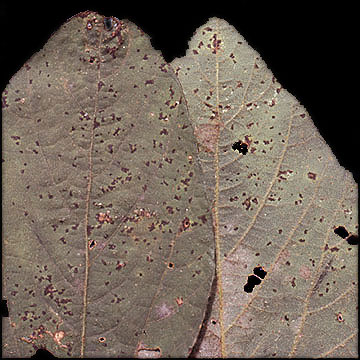 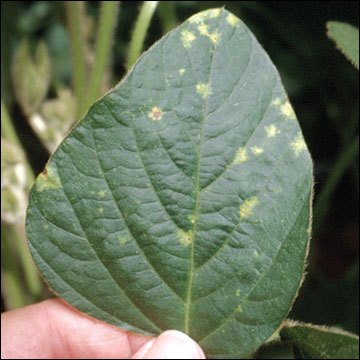 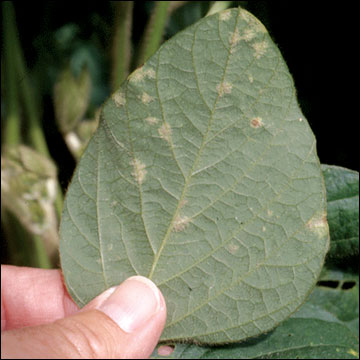 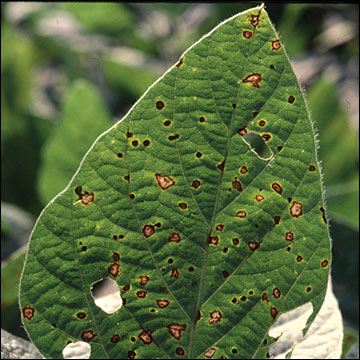 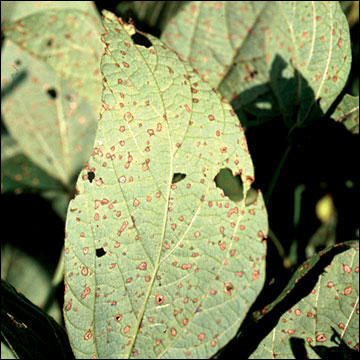 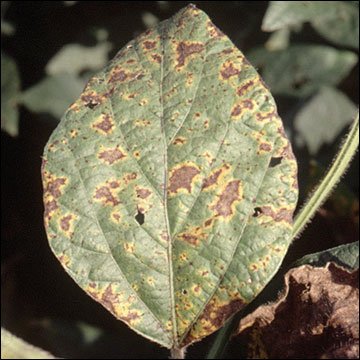 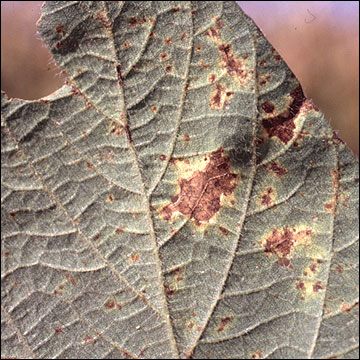 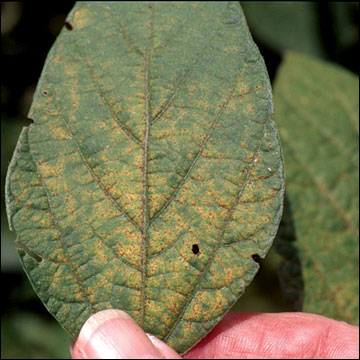 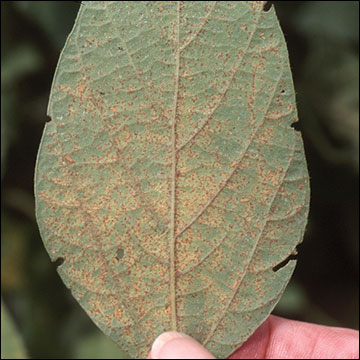