James A. Schaffer
Department of Agronomy

Barley production in Missouri usually increases following a drought. Livestock producers need feed if corn supplies are low or need pasture if grass is not recovered.

As a feed grain, barley is considered to have 95 percent of the feed value of corn. Barley acreage has not been estimated by the Crop Reporting Service since 1977, but estimates range from 5,000 to 20,000 acres each year.

Barley is used in the malting industry as well as for livestock feed. However, attempts to produce barley for malting in Missouri have failed because malting barley requires bright sunshine with little disease during grain filling — a condition most often found in more arid regions of the United States. 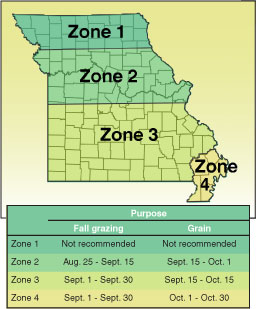 The best soils for barley are well-drained loams and clay loams. Barley cannot stand "wet feet," so you should avoid flat sites with poor internal drainage, such as claypan. Barley does best at a soil pH of 6.0 or above and is often considered one of the most salt-tolerant crops.

Barley requires a good, firm seedbed. It is less winter-hardy than wheat, so you should plant it 1 to 1-1/2 inches deep and seed it earlier than wheat. This practice ensures good establishment and root development prior to winter dormancy. Appropriate seeding dates for barley are shown in Figure 1.

Because barley seed is larger in volume and weighs less than wheat, you should plant 2 to 2-1/2 bushels per acre of vigorous seed with germination exceeding 85 percent. If you try extremely late plantings or if you want pasture, use the higher rate to help ensure good root growth, which helps prevent heaving damage and enhances winter survival.

Barley has fertility requirements similar to those of wheat and should be fertilized accordingly. Because barley tends to lodge (fall down) more readily than wheat, pay special attention to nitrogen and phosphorus fertilization. Too much nitrogen increases the possibility of lodging and encourages luxuriant fall growth which, unless grazed, aggravates winter injury and reduces winter survival. Apply a maximum of 80 pounds of nitrogen per acre and try to apply one-half of that or less in the fall. Spring-applied nitrogen is most essential where barley has been pastured the previous fall. Adequate phosphorus is important in developing good early root growth and should enhance winter survival.

One of the attractions of barley is that it must be planted early and it frequently can provide a source of early fall pasturing. In fact, barley generally provides more fall pasture than wheat or rye. Again, this has been most important in drought years when other pastures are less productive.

Barley provides excellent forage as a pasture, especially in the fall. Barley is not grazed as often as wheat in the spring because it usually loses foliage to winter kill, has slower early growth, and "joints" sooner than wheat. You should remove cattle from barley pastures prior to the onset of jointing — the growth stage in which the first node and head emerge above ground level.

Barley flowers and matures as much as one to two weeks before wheat. This allows those producers who intend to follow barley with a second crop to get a head-start over wheat producers who double crop.

Few barley varieties are adapted to Missouri. Yield results from tests conducted at Columbia are listed in Table 1.

Diseases and their control

Barley diseases are a major limiting factor to barley production in Missouri. They cause significant losses through reduced yield and quality.

Four general types of diseases are:

It is important to recognize the common and damaging diseases so you can apply appropriate control measures.

Several fungi are responsible for head blights that affect kernels. Black point and scab cause shriveled and lightweight seed that germinate poorly. Both pre-emergent and post-emergent seedling losses can come from seedborne and soil-borne organisms.

Take-all is a disease that prematurely kills the roots and lower stems, causing unfilled, bleached, and sterile heads. Rhizoctonia root rot may affect barley at any growth stage, but may be severe in the seedling stage. Seed treatment fungicides help reduce seed and seedling infections.

Leaf diseases may range in severity from small, unimportant spots to large lesions that prematurely destroy large areas of the leaves. The relative severity of leaf infections often varies with weather conditions. Leaf diseases are generally favored by warm and humid conditions — typical of Missouri.

Powdery mildew is a common disease of barley. The fungus forms white to light gray powdery growth on the leaves, sheaths, stems and glumes. In heavy infections, powdery mildew can cause premature death of leaves, especially lower leaves. No varieties adapted to Missouri have resistance, but in most years the disease is not serious.

Net blotch is a common fungus disease of the leaves. The symptoms include a cross-hatched brown "netting" appearance. It can be quite serious in seasons of high moisture.

Septoria leaf blotch causes yellowish to light brown leaf spots. Black pycnidia form in the spots. Although this fungus disease is similar in symptoms to the Septoria leaf blotch of wheat, it is caused by a different Septoria species. It can be serious in moist and humid weather.

Bacterial stripe blight appears as water-soaked dots on the leaves and sheaths. The dots can enlarge into dark brown streaks. It is serious in very wet springs.

By far the most important virus disease of barley is barley yellow dwarf virus. This disease is prevalent in Missouri on wheat, oats and many forage grasses. But barley is especially susceptible, and BYDV can be devastating to barley survival.

Fall infections of BYDV are much more serious than spring infections. Yield reductions of up to 15 percent from fall infections result from fewer heads and smaller head size.

Two smut diseases affect kernels: loose and covered smuts. Loose smut replaces all the kernels of the head with masses of smut spores that are released at the time of flowering, causing new infection in the field. The loose smut fungus over-seasons inside normal-appearing seed. The covered smut fungus mostly survives as spores on the surface of seed.

Scab, caused by Fusarium species, causes spikelets to prematurely bleach by infecting the bases of the spikelets. You may notice pink or salmon-colored infections at the bases. Kernels seriously shrivel and the fungus produces a toxin that can be harmful to non-ruminant animals. Because the same fungus causes stalk and ear rots of corn and scab of wheat, the disease on barley can show up more readily when barley follows these crops.

The basic principle of the control of barley diseases is prevention. Several simple and effective practices follow: