Windy days in late May can be a serious problem for Delta cotton farmers in southeast Missouri and northeast Arkansas. Young cotton plants are most vulnerable to injury from blowing sand at this time. Weather records at Clarkton, Missouri, show that the period from May 15 to 30 usually produces at least one day with maximum wind speeds greater than 35 miles per hour. The level topography in the North Mississippi River Delta region provides little resistance to wind. Many trees, which provided wind protection for young cotton plants, have been removed from field borders to allow the use of large field equipment and center pivot irrigation. Blowing sand and the constant movement of cotton leaves and stems injures cotton seedlings and young plants.

Depending on the severity of the winds in a given spring, 10 to 30 percent of cotton fields without wind protection are replanted because of blowing sand. In fields with less damage, wind injury usually delays the maturity of the cotton one to two weeks. Since the region is on the northern fringe of the Cotton Belt, delays in early growth often result in yield losses.

From 1992 to 1996, a study at the MU Delta Research Center showed the benefits of planting wheat cover crop in cotton row middles. Wind gauges (anemometers) placed in the rows next to cotton seedlings showed that killed wheat in row middles significantly reduced wind speed. Cotton lint yields at Portageville, Missouri, were 121 pounds per acre greater with wheat ridge-till than with conventional-till cotton. 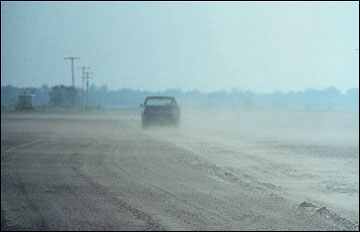 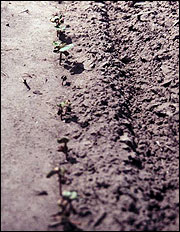 Keys to successful farming of sandy soils in the Delta region

The success of the ridge-till system on sandy soils depends on shredding the cotton stalks each year soon after harvest and planting wheat or rye between the rows. In the spring, the cover crop is killed with herbicide and the cotton planted on the stale seedbeds. The killed wheat stubble slows the wind speed at the soil surface and traps loose sand, which protects young cotton seedlings from injury.

Blowing sand is common on the Malden Ridge, which begins at Dexter, Missouri, and extends south to Leachville, Arkansas. Soils are highly productive for cotton and watermelon cropping but contain large amounts of sand and are low in soil organic matter. Farmers in this region should use conservation tillage to avoid exposing fields to wind erosion. Because fields are nearly level, ridge tillage helps to elevate the plants during rainy periods and increase the soil temperature in the seed furrow.

To protect cotton seedlings from blowing sand, most of the tillage in fields should be done in the fall. Subsoiling in three- to five-year intervals may be needed to break up plow pans from soil compaction. Georgia and Alabama tillage experiments conducted in the 1970s showed significant cotton yield increases to deep tillage on sandy soils of the Atlantic Coastal Plain. Recent tests at Clarkton and Portageville, Missouri, on sandy soils have also showed consistent yield increases to deep tillage with a parabolic subsoiler in corn and soybeans. Farmers who subsoil sandy soils should still adopt other types of conservation practices, such as keeping disking to a minimum and planting wheat or rye in the middles of rows to prevent blowing sand.

The following practices are beneficial for growing ridge-till cotton with winter cover crops:

If weather prevents fall cover crop planting, spring oats are an option for planting in late February or March. Field tests at Clarkton showed that cotton yields were as high following spring oats as they were following other cover crops.

Keep spring tillage to a minimum. Use spiked row cleaners on planters to level beds and remove residue for seedbed preparation.

A dense stand of wheat or rye is not necessary to trap and hold most of the blowing sand. Winter cover crops can actually delay cotton maturity if they pull too much soil moisture from the beds and delay germination of cotton seeds. To plant cover crops, farmers often take old grain drills and remove two-thirds of the drill units. Two drills are left per cotton row middle with the seed box holes covered in the missing units. An alternative planting method for cover crop planting is to mount an air seeder on the tool bar of the hipper (lister). Hoses from the seeder are directed between cotton row middles to deliver seeds while beds are being formed. This saves fuel and a second trip across fields. 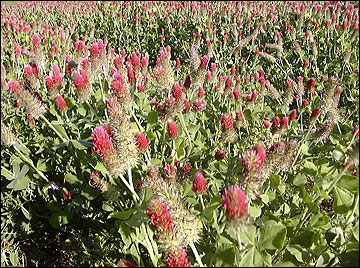 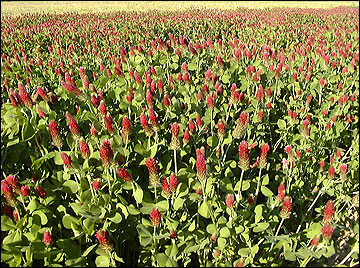 Planting nitrogen-fixing winter legumes such as crimson clover or hairy vetch winter legumes can potentially save on nitrogen fertilizer costs for cotton. Experiments at Portageville and Clarkton, Missouri, aimed at achieving stands of legume cover crops that survived the winter were usually more successful on silt loam soils than sandy soils. A cotton study on silt loam soil at Portageville showed that 'Robin' crimson clover (a new early-maturing variety) successfully reseeded itself each fall for three years. More clover residue in the middle and top of rows was produced than is needed to protect cotton from wind.

Reseeded clover plants growing on the top of beds pulled moisture out of silt loam soil. When optimal rates of N were applied to plots where there was no clover, cotton yields were higher than in clover plots. Where pivot irrigation is available, soil moisture might not be an issue. Crimson clover stand failures from winterkill occurred in two out of three years on sandy soils. Currently planting clover instead of wheat or rye as a cover crop for cotton is not recommended in Missouri.