Sulfur and Boron Fertilization on Cotton

The most limiting nutrients for cotton production are nitrogen, potassium and phosphorus. However, on many Delta soils, sulfur (S) and boron (B) fertilization are also important for making optimum cotton lint yields. Sulfur is needed by cotton plants to produce amino acids, which are required to make proteins and enzymes. About 3 percent of the plant tissue is composed of sulfur. Boron is considered a micronutrient because it is a cell wall component and comprises only 0.2 percent of the plant material.

Many farmers do not have soil samples from their fields tested for sulfur or boron. One reason is most soil test laboratories do not include the elements in their standard analysis. Typically, an additional $5 to $10 fee is charged for testing sulfur and micronutrients. 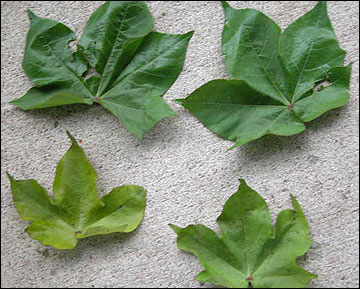 The cotton leaves at the bottom of this photo are from S-deficient plants. Leaves are lighter green and smaller than normal.

In the past, the conventional wisdom has been that enough sulfur becomes available to crops by rainfall deposition or organic matter decomposition. This is less likely to be true today. Reductions in air pollution may increase crop sulfur fertilization demands in some areas of the United States. One of the goals of the U.S. Clean Air Act of 1970 was to reduce "acid rain." To comply with Environmental Protection Agency standards for sulfur dioxide gas emissions, many power facilities in the United States have switched to burning low-sulfur western United States subbituminous coal. A typical Wyoming Powder River Basin Coal contains 0.6 percent S as compared with a typical Illinois coal (Illinois #6), which contains 4.8 percent S. Scientists with the National Atmospheric Deposition Program headquartered in Champaign, Illinois, are studying sulfate (SO4-2) deposition at sampling points around the country. Most of the sulfate is deposited in the winter months when the majority of the rainfall occurs. Sulfur deposition in Missouri has been reduced about 30 percent in the last decade. Between 1989 and 1991, annual sulfate deposition levels ranged from 22 to 30 pounds per acre. From 2001 to 2003, the levels dropped to 15 to 20 pounds per acre.

Symptoms of sulfur deficiency are similar to those of nitrogen deficiency. Applying more N fertilizer will not cause S-deficient plants to turn green.

Sulfur fertilizer decreased the nitrogen-to-sulfur (N/S) ratio in petioles collected at full bloom on the Malden fine sand soil. No cotton yield increases were found in cotton with petioles that had N/S ratios less than 20.

To prepare a tissue sample for laboratory testing, collect 20 to 25 petioles per field. Count node 1 as the first fully expanded leaf at least the size of a quarter in the top of the plants. Count down four nodes and break off the leaf and stem from the vegetative branch. Discard the leaf blade and place the petioles in a paper envelope. Mark the field identification information on the envelope. 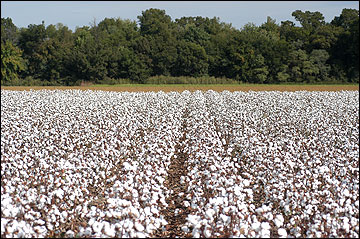 Boron fertilization improves boll retention and boll opening by helping to move carbohydrates from the leaves to the fruit.

A textbook description of boron deficiency in cotton is dark rings on leaf petioles and shortened internodes. In reality, these symptoms often go unnoticed in cotton fields. Boll shedding and "hard locks" can also be caused by boron deficiency. A severe deficiency can cause sepals around bolls to harden and fail to open.

Many symptoms associated with boron deficiency are sometimes mistaken for other problems. Low boll retention can be caused by cloudy or dry weather conditions, plant bug damage, or in the case of shortened internodes, plant growth regulator applications. Boron improves boll retention by helping move carbohydrates manufactured in the leaf to other parts of the plant. A severe boron shortage can cause the sepals around the boll to fail to open. Waiting to apply boron after deficiency symptoms occur could reduce cotton yields.

The largest cotton yield response to boron fertilization occurs when a field has been limed to soil pH values above 6.0.