Increased use of wheat silage

Wheat is being used more and more as a silage by dairy farmers. Several desirable characteristics of wheat as a forage crop caused increased use:

There are some disadvantages of wheat for silage: 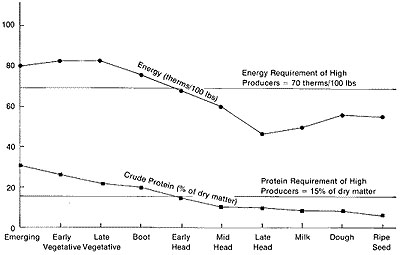 Recent research at MU has helped determine the nutrient content of wheat silage and the optimum stage of maturity for harvest.

Wheat from four different farms in northwest Missouri was sampled at about one week intervals from March to June 1976. These samples represented wheat harvested from early (emerging) to late (ripe seed) stages.

The fiber fractions of the plant (Table 1) increased very little in the first three stages (emerging, early vegetative and late vegetative) because the plants were growing rapidly and were producing a large amount of highly digestible, nonfibrous material. Consequently, net energy of lactation in these first three stages was high and actually increased slightly.

In the last three stages (milk, dough, and seed) seed carbohydrates were being formed and tended to dilute out and decrease fiber. Consequently, net energy increased slightly in these latter three stages, and protein was extremely low.

The net energy content of wheat cut at the boot and the early head stage was 76 to 68 therms per 100 pounds, respectively. This means that at these two stages, wheat silage appears to be similar to corn silage and better than many hays or haylages in energy content. Note that once the wheat got into the mid-head stages, energy decreased quite rapidly.

Crude protein (Figure 1, Table 1) was high in early stages and declined to a low level in the seed stage. Crude protein was about 21 percent and 15 percent at the boot and early head stages, respectively; this means wheat was superior to grasses and equal to legumes in protein content at these stages.

The 3 percent unavailable protein was about the same as has been found in most other forages.

Calcium and phosphorus content of wheat cut at the boot, mid-head and dough stages is in Table 2. Calcium content was very low compared to most forages at the boot stage. A 50 percent reduction occurred from boot to dough.

Phosphorus content was similar to levels found in most forages and declined about 25 percent from boot to dough.

The fiber, energy, protein, calcium and phosphorus data of Tables 1 and 2 and Figure 1 indicate that the best time to cut wheat as a forage for dairy cows is from boot to early head. At these two stages, energy was 68 to 76 therms per 100 pounds and crude protein was about 15 to 21 percent. The high producing cow should be getting about 70 therms of energy per 100 pounds dry matter and 15 percent crude protein, according to National Research Council recommendations. Thus, wheat for silage cut by boot or early head will contain enough energy and protein when fed in combination with a balanced grain ration to sustain high milk production.

Harvest probably should begin when the wheat just reaches the boot stage; if harvest proceeds quickly without interruptions from weather, etc., the last silage cut should be in the early head stage. Letting wheat progress to mid-head decreases energy and crude protein and creates a need for greater supplementation. Figure 1 illustrates this point: Two horizontal lines represent energy and protein requirements of the high producer. Wheat cut at boot and early head has energy and protein content above levels required for high producers. However, cows cannot eat enough wheat silage cut at boot and early head to meet energy requirements, and concentrates will be needed. Wheat cut at mid-head and later stages is below energy and protein requirements for high producers.

Although greater yields most likely would result if wheat is left to mature to the late head, milk, dough or seed stages, the wheat has less energy and protein (about 50 therms per 100 pounds and 8 to 10 percent crude protein). This is no better than average hay. Cows are not likely to produce at their maximum when consuming wheat forage cut later than early head.

Wheat silage cut at boot or early head contains high levels of energy and protein and is similar to alfalfa haylage. On the other hand, wheat silage is extremely low in calcium (Table 2) — lower than most other forages. Therefore, when wheat silage is used, extra calcium must be used in the grain mix to bring calcium levels up to recommended levels.

When dairy producers change from corn silage to wheat or other small grain silages, they must reformulate the grain ration. Reformulation will often mean lowering the protein and increasing the calcium in the grain. The amount of grain fed usually should be increased because corn silage is normally higher in energy than wheat, grass, and small grain silages.

Ensiling and maintaining top quality silage is probably more difficult than corn and sorghum silage because, like other cereal, grass, and legume silages, wheat silage can spoil easily. Management practices that will help ensure good quality wheat silage are:

Because dry matter increases as harvest proceeds, dry matter at the beginning of harvest should be on the low side so that the last wheat ensiled will not be too dry. For example, if the first wheat put into the trench or bunker is about 30 percent dry matter, the last silage put in probably will be about 35 percent. Wilting will be necessary to get dry matter content into this range if wheat for silage is cut at the boot stage. The last few loads may be direct cut to improve final packing.