Determining Age of Horses by Their Teeth

The art of determining the age of horses by inspection of the teeth is an old one. It can be developed to a considerable degree of accuracy in determining the age of young horses. The probability of error increases as age advances and becomes a guess after the horse reaches 10 to 14 years of age. Stabled animals tend to appear younger than they are, whereas those grazing sandy areas, such as range horses, appear relatively old because of wear on the teeth.

Horses, like people, vary considerably in vigor and longevity. In general, they have passed their physical peak when they reach 9 to 10 years of age. At this age, the chance of an unsoundness being present has increased.

Age determination is made by a study of the 12 front teeth, called incisors. The two central pairs both above and below are called centers, pincers, or nippers. The four teeth adjacent to these two pairs are called intermediates, and the outer four teeth are designated as corners.

Canine teeth or "tusks" may appear midway between the incisors and molars at 4 or 5 years of age in the case of geldings or stallions, but seldom appear in mares. Adult horses have 24 molar teeth.

There are four major ways to estimate age of horses by appearance of their teeth: 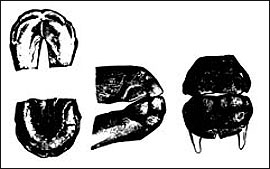 Figure 1
The mouth of a colt at birth. None of the teeth have penetrated the gums.

Figure 2
One year of age. All temporary teeth are present. The corners are not yet in wear.

Figure 3
Two-year-old mouth showing corners in wear. Temporary teeth may be identified by the well-defined neck joining root and gum, a lighter color and smaller size than permanent teeth.

Figure 4
A typical 3-year-old mouth showing the large permanent center teeth, both upper and lower. Contrast these with the small, light-colored temporary teeth shown in the previous figures.

Figure 5
Note the well-developed permanent centers, immature intermediates and milk teeth at the corners in this 4-year-old mouth. Tusks or canines have appeared.

Figure 6
At 5 years, all of the temporary teeth have been replaced by permanent teeth. This is called a “full mouth.” Although the corner teeth are well-matched from a profile view, they show very little wear in the view of the upper jaw. The upper centers are beginning to appear round on the inside back surface. Cups are very plain, both above and below, with little wear appearing on them.

Horses have two sets of teeth, one temporary and one permanent. Temporary teeth may also be called "baby" or "milk teeth." Temporary incisors tend to erupt in pairs at 8 days, 8 weeks, and 8 months of age.

A well-grown 2-year-old may be mistaken for an older horse unless permanent teeth can be accurately identified. Permanent teeth are larger, longer, darker in color, and do not have the well-defined neck joining root and gum that temporary teeth do. Figure 4.

The four center permanent teeth appear (two above and two below) as the animal approaches 3 years of age, the intermediates at 4, and the corners at 5. This constitutes a "full mouth."

Figure 7
This 6-year-old mouth shows some wear on the corner teeth as viewed from the side. Cups in the lower jaw in the centers should be worn reasonably smooth at this age. They show relatively less wear than is customary in the normal 6-year-old mouth. Note that canines are immature as contrasted to those in Figure 6. The dovetail or notch is apparent, but the angle of incidence shows little change.

Figure 8
At 7 years, dovetail has usually developed to its maximum. The rounding corner on this picture does not give it the appearance that is ordinarily seen in a 7-year-old mouth. The angle of incidence has not obtained very much sharpness and perhaps is typical for this age. Cups are coming out of the lower centers and intermediates, with very prominent cups still showing in the corners and in all of the upper teeth. Dental stars have not appeared.

Figure 9
This 8-year-old mouth shows the notch almost completely gone from the upper corner tooth. Cups have all disappeared from the lower jaw, but none in the upper jaw have worn out. The teeth are showing much more ovalness on the back surfaces than at younger ages, and angle of incidence is becoming sharper. Dental stars have appeared in four lower and two upper incisors.

Figure 10
A front view of this 9-year-old mouth shows a tendency toward less width of the teeth and more length. The profile view shows more steepness to the angle of incidence; however, this angle does not appear to show the acuteness of a typical 9-year-old mouth. Cups are gone from the lower jaw and the two centers above. All teeth are tending toward more ovalness except the upper corners. Dental stars are merging with central enamel rings, which are becoming small and round.

Figure 11
This 10-year-old mouth shows a typical angle of incidence with reappearance of notch on the upper corner. Ordinarily cups are gone from all of the teeth but the upper corners at 10 years of age. Back surfaces of upper centers are changing from ovalness to angularity.

Figure 12
Much length of teeth relative to width can be seen in the front view of this 11-year-old mouth. A profile view shows considerable angle, with the upper corners almost missing the lowers. Cups are all gone, and centers and intermediates are assuming angularity.

Figure 13
This 12-year-old mouth cannot be differentiated from the 11-year-old mouth in Figure 12 except for cups in the upper corners and a decrease in size of the central enamel rings. When a horse is completely smooth-mouthed, things other than age will determine usefulness. Perhaps the best way to ascertain the physical condition of a horse that is being considered for purchase is to take the horse home on a trial basis.

Figure 14
A 15-year-old mouth. All of the cups are gone. The central enamel rings are prominent but are very small and round. All teeth have become angular.

Figure 15
Length of teeth, acute angle of incidence and triangular surfaces characterize this 21-year-old mouth. Spaces have appeared between the teeth.

Figure 16
This 30-year-old mouth shows characteristics of extreme age, although spaces between the teeth are absent. 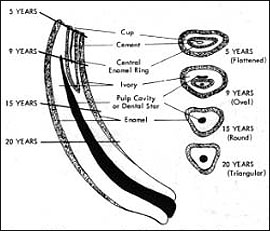 Figure 17
A permanent middle incisor tooth at different ages and stages of wear. This drawing shows why wear brings about a change in angle of incidence, shape of the table surfaces, and disappearance of cups with appearance of dental stars. As wear progresses, surface enamel is worn away, which leaves two enamel rings, one around the margin of the table surface and the other around the cup. As wear continues, the cup almost disappears and the dental star or pulp cavity makes its appearance (at about 8 to 10 years). The tip of the dental star first appears as a wide, thin yellow line in front of the internal enamel surrounding the cup. In old age, dental stars appear dark, round and centered in the tooth. Changes in shape from oval to angular are shown in the cross-sectional views as wear progresses toward the root.

Young permanent teeth have deep indentures in the center of their surfaces, referred to as cups. Cups are commonly used as reference points in age determination. Those in the upper teeth are deeper than the ones below, hence they do not wear evenly with the surface or become "smooth" at equal periods of time. In general, the cups become smooth in the lower centers, intermediates, corners, upper centers, intermediates, and corners at 6, 7, 8, 9, 10, and 11 years of age, respectively. Figures 7 to 12. A "smooth mouth" theoretically appears at 11. A few horse owners ignore cups in the upper teeth and consider a 9-year-old horse smooth-mouthed. Although complete accuracy cannot be ensured from studying cups, this method is second in accuracy only to the appearance of permanent teeth in determining age.

As cups disappear, dental stars appear — first as narrow, yellow lines in front of the central enamel ring, then as dark circles near the center of the tooth in advanced age. Figure 17.

The angle formed by the meeting of the upper and lower incisor teeth (profile view) affords an indication of age. This angle of incidence or "contact" changes from approximately 160 to 180 degrees in young horses, to less than a right angle as the incisors appear to slant forward and outward with aging. Figures 5, 8, 11, 15, and 16. As the slant increases, the surfaces of the lower corner teeth do not wear clear to the back margin of the uppers so that a dovetail, notch, or hook is formed on the upper corners at 7 years of age. It may disappear in a year or two, reappear around 12 to 15 years, and disappear again thereafter. Figures 8, 10, 12, 14, and 15. The condition varies considerably between individuals, but most horses have a well-developed notch at 7.

Shape of the surface of the teeth

The teeth undergo substantial change in shape during wear and aging. Figure 17. The teeth appear broad and flat in young horses. They may be twice as wide (side to side) as they are deep (front to rear). This condition reverses itself in horses that reach or pass 20 years. From about 8 to 12 years the back (inside) surfaces become oval, then triangular at about 15 years. Twenty-year-old teeth may be twice as deep from front to rear as they are wide. Study these differences in Figures 3, 10, 15, and 16.

"Parrot mouth" is a result of the upper and lower incisors not meeting because the lower jaw is too short. This condition is rather common and may seriously interfere with grazing. Figure 18.

"Monkey mouth" is the opposite of parrot mouth and is seldom seen in horses.

"Cribbing" is a habit common to stabled horses which damages incisors by chipping or breaking them.

"Bishoping" is tampering with cups to make the horse appear younger than it is.

"Floating" is filing high spots in molars to facilitate chewing. Molars should be checked regularly by veterinarians as the horse approaches mid-life and should be kept floated as needed thereafter.

"Galvayne's Groove." A groove said to appear at the gum margin of the upper corner incisor at about 10 years of age extends halfway down the tooth at 15 years and reaches the table margin at 20 years. It then is said to recede and disappear at 30 years.