Functional Anatomy of the Horse Foot

A horse's hoof is composed of the wall, sole and frog. The wall is simply that part of the hoof that is visible when the horse is standing. It covers the front and sides of the third phalanx, or coffin bone. The wall is made up of the toe (front), quarters (sides) and heel.

When the foot is lifted off the ground, the sole and frog are visible, as well as the bars of the wall and the collateral grooves (Figure 1). 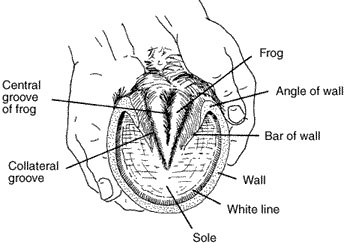 Figure 1
The wall, bars and frog are the weight-bearing structures of the foot.

Inside the hoof, lateral cartilages extend back and up from the inner and outer sides of the third phalanx (Figure 2a). These cartilages are flexible, but as the horse ages, they are usually ossified and replaced by bone. Between the second and third phalanges and above the deep flexor muscle tendon is a small bone called the navicular bone (Figure 2b). The navicular bone and its associated bursa — a fluid-filled sac that reduces friction between the tendon and the bone — are involved in navicular disease, which is a common cause of lameness. 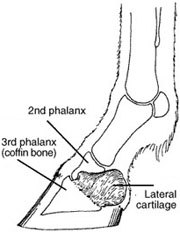 Figure 2a
Internal structure of the horse foot. 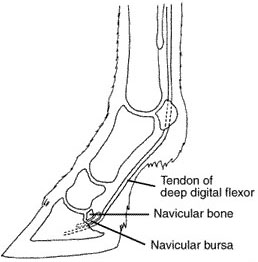 Figure 2b
Internal structure of the horse foot. 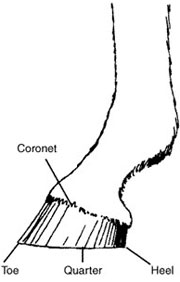 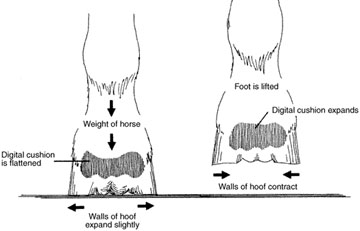 Figure 3
Flexible structures in the horse's hoof expand and contract with each step as weight is transferred from one foot to another.

The digital cushion is a mass of flexible material that contributes to the formation of the heels (Figure 3). This structure is one of the primary shock absorbers of the foot.

As weight is placed on the hoof, pressure is transmitted through the phalanges to the wall and onto the digital cushion and frog. The frog, a highly elastic wedge-shaped mass, normally makes contact with the ground first. The frog presses up on the digital cushion, which flattens and is forced outward against the lateral cartilages. The frog also is flattened and tends to push the bars of the wall apart (Figure 3). When the foot is lifted, the frog and other flexible structures of the foot return to their original position.

When the foot is placed on the ground, blood is forced from the foot to the leg by the increase in pressure and by the change in shape of the digital cushion and the frog. The pressure and the change in shape compress the veins in the foot. When the foot is lifted, the compression is relieved and blood flows into the veins again. In this way, the movement of these structures in the hoof acts as a pump. Exercise increases the blood circulation in the foot and favors good hoof growth. Lack of exercise, dryness of the horny wall, and poor nutrition inhibit hoof growth.

Normally, the hoof wall grows at the rate of about three-eighths inch per month. New layers of hoof wall are produced continuously from just below an area called the coronet at the junction of the skin and the hoof wall (Figure 2c).

The hoof wall is covered with material that prevents evaporation of moisture. When this material is deficient, the hoof wall becomes dry and excessive flaking and cracking may occur. A good hoof paint aids in preventing excessive drying.