It's no secret that their hair coats keep cattle warm. The insulation their coats provide is handy in the winter, but if the cattle don't shed enough hair early enough in the summer, it can be a real problem. In hot and humid conditions, water from sweat gets trapped in spaces between the hair follicles, causing the animals to expend more energy on regulating their body temperature through faster breathing and increased sweating. Thus cattle with thick or woolly coats, characteristic of animals that have not yet shed winter hair, are at a distinct disadvantage in hot and humid climates. Not only do they look less "slick," or fully shed, but these animals are also at increased risk of heat stress and dehydration. One study of Holstein cows found that the rectal temperatures of animals that had retained their winter hair coats were 0.32 to 0.72 degrees F higher than those of animals that had fully shed their hair.

Cattle hair coats are routinely trimmed for cosmetic benefit in the show ring. In a production setting, hair may be removed in an effort to improve hygiene around udders. One major drawback associated with trimming is the time it takes. An alternative, and quicker, method is removal via low-temperature flame, or torching. Dairy producers are already known to use gas torches as a quick and safe method of hair removal on dairy cow udders, but only now has this method been applied to animals with improved herd health in mind. By replicating the natural shedding process via torching, researchers at the University of Missouri have succeeded in keeping animals significantly cooler during hot summer months.

The device used for flame application is sold as an alternative to herbicides for weed removal. Several makes and models are available, but the basics consist of a standard 20-pound propane tank connected via hose to a hand-held wand (Figure 1). The cost for a tank of fuel and a torching wand is around $50, and both items are readily available at home goods stores. 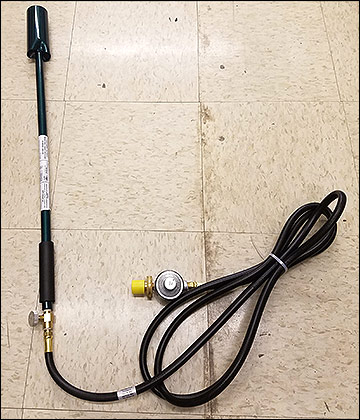 Figure 1
A basic torch apparatus consists of a hand-held wand attached to ahose, as pictured, that is connected to a standard 20-pound propane tank.

Safety is the top priority when applying flame for hair coat removal. Before beginning the procedure, assess the working area for flame resistance and ventilation, During the procedure, monitor the animals constantly.

To enable the torching to proceed quickly, restrain the animals to hold them in place during the procedure. In the MU study, the animals were restrained in a squeeze chute. Apply the propane-fueled flame 10 to 14 inches from the target coat. Carefully singe to remove the thick winter coat along the top line, flank, and heart girth, where the largest amount of hair is located. Speed is key; move the flame quickly to keep it from lingering too long at one spot and potentially burning skin. Once the area is singed, brush the animal off and release it.

Complete application of flame to an animal takes about 30 seconds and removes about 11 percent, or 4 square feet, of the hair coat. The end goal is not to totally remove hair, only to replicate what natural shedding would ultimately do anyway.

In the MU study, the animals showed no signs of injury immediately following the flame application. Researchers studied the animals for over three months following the protocol and noted no ill-effects as a result of torching. Torched animals were apparently no more susceptible to sunburn, abrasions or insect bites. Plus, their average daily core temperature was 0.41 degrees F lower than that of the animals that had retained their hair coats, and their maximum daily core temperature was 0.54 degrees F lower. Calves that had not been torched eventually shed to the point of having hair coats similar to those of the treated animals, but a visual difference existed until midway through the trial. This result suggests that the shedding process can indeed be replicated and accelerated in a production environment.

Producers may understandably be wary of pointing a flame at valuable livestock. But if the protocol is applied correctly and with common sense, it can speed natural shedding. It only has to be done once a year, takes little time, and keeps animals cooler throughout the hottest season. This protocol may be most attractive to producers who already have an inclination to clip animals for other reasons. When compared to clipping the topcoat of comparably sized animals, the torch method is estimated to be up to five times quicker. This increased speed means each animal spends less time in the chute and more cattle can be worked at a time. The apparatus is widely available and is cheaper than commercial clippers. A torch kit and fuel to work many dozens of calves can be had for $50, about a quarter of the price of an average set of professional livestock clippers. In addition, producers can still use pour-on dewormers and freeze brands as they wish.

By using the torch protocol to remove hair coats, owners will know that their animals are expending less energy trying to stay cool. This is an attractive result, not just from the standpoint of animal welfare, but also because cooler cattle may be less inclined to seek shade during hot weather. Though not yet tested, the possibility that treated animals will stay grazing in the pasture further into a hot day may be a real selling point for the torch protocol. If this quick, cheap treatment will allow animals to graze longer during the summer months before hiding under shade trees and improve their quality of life, then the torch protocol is well worth consideration.