Indoor air can be polluted in a number of ways. Indoor pollutants include formaldehyde, carbon monoxide, respirable dust, nitrogen dioxide, radon and other gases. This guide focuses on just one of these pollutants — radon.

What is the risk level?

People exposed to radon or other pollutants face some uncertainty about the amount of health risk the radon poses. Radon risk estimates are based on scientific studies of miners exposed to varying levels of radon in their work underground. Consequently, scientists are considerably more certain of the radon risk estimates than they are the risk levels based totally on animal studies.

Radon is an odorless, colorless, radioactive gas that is caused by the natural breakdown (radioactive decay) of materials that contain uranium. Radon can be found in high concentrations in soils and rocks containing uranium, granite, shale, phosphate and pitchblende. You can also find it in soils contaminated with certain types of industrial waste, such as the byproducts from uranium or phosphate mining.

In the outdoors, radon is diluted to such low levels that there is usually nothing to worry about. Once inside an enclosed space such as a home, however, radon can accumulate, depending upon the building's construction and the concentration of radon in underlying soil.

Radon in homes may come from many sources. The main route of entry is from the soil and rock underneath the home. Radon migrates from the soil and rock through the cracks and openings in walls and floors or through floor drains, sumps, joints and tiny cracks or pores in hollow-block walls. Earth-contact and solar-heated homes using rock-heat storage may have higher levels of radon because of the additional soil and rock used in such construction.

Radon can also enter water in private wells and be released into a home when the water is used. Usually, radon is not a problem with large community water supplies where it would probably be released into the outside air before the water reaches a home.

In some unusual situations, radon may be released from materials used in the construction of a home. For example, a problem might arise if a house has a large stone fireplace or has a solar heating system where heat is stored in large beds of stone. In general, however, building materials are not a major source of indoor radon.

According to the State Geological Service, "There are more questions than answers as to where we expect high risks in Missouri." We have little scientific data where we might find high levels caused by specific geological formations. Areas of the state that might be suspect are:

The two most popular commercially available detectors for homeowners are Charcoal Canisters and Alpha Track detectors. Both are exposed to air in the home for a specific period of time and then sent to a laboratory for analysis.

Charcoal Canisters (CC)
Charcoal Canisters are containers filled with a pre-measured amount of activated charcoal. The homeowner unseals the airtight canisters and places them in the home according to manufacturer's guidelines for up to seven days. At the end of the test period, the canisters are re-sealed and returned to the laboratory or distribution point for analysis.

Other techniques to measure radon are available, but they require trained personnel and special instrumentation. The techniques are also extremely expensive ($2,500 to $10,000).

The EPA conducts a Radon Measurement Proficiency Program. This voluntary program allows laboratories and businesses to demonstrate their capabilities in measuring indoor radon. For names of firms participating in the program, write or call:

Measurement results will be reported in one of two forms — working level (WL) or picocuries per liter (pCi per liter). 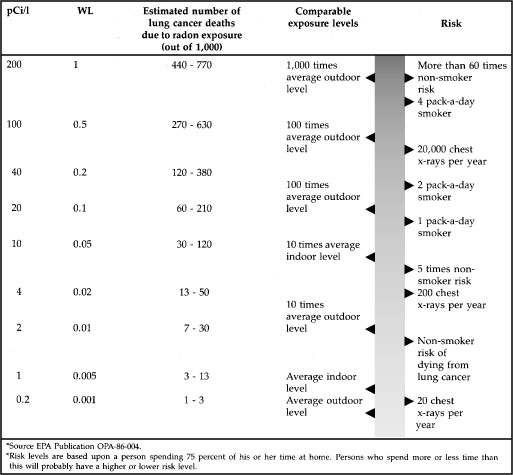 How to reduce risk

Lung cancer resulting from radon exposure depends upon the level and length of exposure.

The following measures can be taken to reduce exposure level. They are easy and inexpensive.

While the above actions help reduce risks occurring from radon, they generally do not offer a long-term solution. There are a number of permanent solutions that a homeowner may want to consider to alleviate a radon problem. The first is to seal all entry points, such as cracks, pipe openings and capped sumps. Another solution might be to use natural, fan-forced or heat-recovery ventilation to get rid of as much as 90 percent of the radon in the home. Table 1 is a comparison chart of various permanent, cost-effective solutions recommended by the EPA.

1These represent the best reduction trhat a single method can accomplish. You may get higher or lower reductions depending on the unique characteristics of your house. It is likely that reductions in your house will not be as great as those shown. Especially with high initial radon levels, several methods may have to be combined to achieve acceptable results. Source: EPA Booklet OPA-86-005, Radon Reduction Methods — A Homeowner's Guide.

For more detailed explanations of techniques, see the EPA publication, Radon Reduction Methods — A Homeowner's Guide. You can obtain a copy of this booklet from: