Few farmers view livestock as a source of danger. Yet animal-related accidents cause numerous deaths and serious injuries each year. A recent National Safety Council study ranked beef cattle farms second and dairy operations third among all farming enterprises in injuries per hours of work. Seventeen percent of all farm injuries involved animals. This equaled the percentage of injuries caused by farm machinery.

Removing hazards brings you one step closer to a safe work environment. Whether you are operating equipment or working with animals, taking a few precautions and observing safety rules can save you precious time, prevent injury, or even save your life.

Anyone who works with livestock knows each animal has its own personality. Animals sense their surroundings differently than humans. Their vision is in black and white, not in color. They also have difficulty judging distances. And differences exist between the vision of cattle, swine and horses. For example, cattle have close to 360-degree panoramic vision (Figure 1). A quick movement behind cattle may "spook" them. 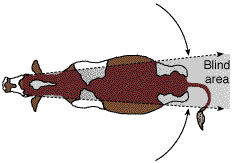 Figure 1
Cattle have a panoramic field of vision.

Watching animals for signs of aggressiveness or fear alerts you to possible danger. Warning signs may include raised or pinned ears, raised tail or hair on the back, bared teeth, pawing the ground or snorting.

Although handling methods may vary greatly for different types of livestock, there are some generally accepted rules for working with any animal:

Many livestock handling injuries are directly related to equipment or building structures. Poor facilities and equipment can also cause injuries to animals. This can mean considerable economic loss at market time.

Tripping hazards such as high door sills, cluttered alleyways and uneven walking surfaces can cause serious injury and a considerable amount of lost work time. Studies have found that falls account for 18 percent of all animal-related accidents.

Concrete floors are best for livestock. The finish on concrete floors should be roughened to prevent slips under wet conditions. High traffic areas, such as alleyways, should be grooved. Floors should allow water to drain easily. Slatted floors often are used to keep animals dry in a confinement system.

Fencing and gates should be strong enough to contain crowded livestock. A variety of materials are available, but the key is strength and durability. A protruding piece of lumber, a nail or a bolt can cause painful and infectious injuries. If backed or pushed into, one of these objects can cause a serious back injury.

Lighting should be even and diffused. Bright spots and shadows tend to make animals more skittish, especially near crowding or loading areas. Animals move more readily from dark areas into light, but avoid layouts that make them look directly into the sun.

Hygiene is vital to good livestock management, particularly in confinement systems where diseases can spread quickly. Maintaining a clean, dry environment is obviously important, but other factors also are crucial.

Ventilation should minimize dust. Various molds that can cause respiratory as well as digestive problems may be present in feed. All feeds should be carefully checked before they are fed to livestock. Deal only with reliable feed dealers and have suspect feed tested.

All animals, domesticated or wild, can be a source of human illness and parasitic infestation. Diseases that can be transmitted between animals and people are referred to as zoonoses.

Rabies is a deadly virus that affects the central nervous system. It can be transmitted by saliva from an infected animal through a bite, open wound or sore. Although widespread pet inoculation has greatly reduced the threat of rabies, rural people are at greater risk due to their proximity to wild animals. A veterinarian should be called to examine animals observed acting abnormally. Seek immediate medical attention if you are bitten by an animal that you suspect is rabid.

Lyme Disease (LD), while only a remote possibility in Missouri, is another potential threat. Although the tick species known to transmit LD are not present in the state, the organisms that cause LD have been found in the Lone Star tick, which is found in Missouri. It is not known at present whether this tick transmits LD to humans. It may transmit LD to animals, but is known to do so only in its nymphal stage when it is usually found on rodents, birds and feral animals such as deer.

If LD occurs, its symptoms may develop within 2 to 30 days of the tick bite. A small red bump appears near the bite and enlarges into a spreading red ring. This is followed by a general sickness, including fever, chills, headaches and backache. Some may experience palpitations, dizziness and shortness of breath.

LD responds well to antibiotics in its early stages, but if left untreated, it may advance into a chronic stage involving rheumatoid arthritis or cardiac problems.

Brucellosis (Bangs Disease) affects cattle, goats and swine. It can be transmitted to people in unprocessed milk, infected carcasses, or by an aborted fetus or afterbirth from an affected animal. Good sanitation practices reduce the chances that herds will be infected. Animals should be tested periodically for this disease.

Trichinosis, caused by tiny parasites, can be painful and sometimes fatal to humans. It is transmitted by consumption of uncooked or partially cooked pork. Trichinosis has nearly been eradicated in North America. Thorough cooking is the best prevention.

Salmonella organisms are found in poultry and in wild and domestic animals. They can be transmitted to people through contaminated food or water. The disease can cause severe gastrointestinal distress and fever. Prevention includes proper storage and cooking of animal-derived foods. Good sanitation procedures when handling food reduce the risk of salmonella poisoning.

Other zoonoses also exist. However, preventive measures such as keeping animal facilities clean, testing and immunizing, and using sanitary practices in handling animals and their products minimize the danger.

Toxic gases, especially in confined spaces such as manure pits, silos and grain bins, can pose hazards to humans and animals. Four gases of major concern can be found in manure pits. They are hydrogen sulfide (H2S), ammonia (NH3), carbon dioxide (CO2) and methane (CH4).

The primary health hazards of these gases are:

Prevention
Under normal conditions in a well-designed, properly constructed building with good ventilation, you should not have many problems with gas accumulation. But serious problems can occur if the proper precautions are not followed.

Grain, particularly corn, can accumulate high amounts of nitrates. During the first 24 to 48 hours of fermentation, significant amounts of nitrogen dioxide (NO2) can be released. When this gas is inhaled by silo workers, it can cause a severe chemical pneumonia known as "silo filler's disease."

Nitrogen dioxide is one of the most hazardous lung irritants. It has a pungent, sweetish odor, even in low concentrations of 5 parts per million (ppm). It has a reddish-brown color, visible only when concentrations reach a dangerous level (75 to 150 ppm). It is heavier than air and can settle at the bottom of enclosed spaces.

Any concentration over 25 ppm can be hazardous. The effect on the lungs is often so subtle that the victim may not realize the serious nature of the exposure until too late. Inhalation of 50 to 75 ppm for 30 to 60 minutes can cause bronchitis; 50 to 100 ppm causes chemical pneumonia; 150 to 200 ppm, a severe fibrosis type of pneumonia; 300 to 400 ppm, severe lung damage, fatal in 2 to 10 days; over 500 ppm, acute pulmonary edema, fatal in less than 48 hours.

Dusts are the most common danger in the air when working around livestock. Some types of dust are more dangerous than others. But all dust can cause serious health problems to an individual, depending on the amount, type and length of exposure.

Some dust carries antigens that cause severe irritation to the respiratory tract and lungs. This often results in lung damage. The most common form is known as "farmer's lung." It results from breathing moldy forage or grain, normally hay. Farmer's lung is one of the most disabling diseases among dairy farmers.

Farmer's lung symptoms often are not noticed until several hours after exposure to the dust. Symptoms often are mistaken for bronchitis or pneumonia. If the disease is not diagnosed early, irreversible lung damage and sometimes death can result.

Farmer's lung will limit the amount of work a farmer can do because shortness of breath will require frequent rest periods.

"Nuisance dust" is the term for other forms of dust that are often inhaled while working with livestock. Breathing dusty air of this type for long periods will cause areas of your lungs to become hardened and inelastic, and your capacity to take in needed oxygen will be reduced. Furthermore, your susceptibility to respiratory diseases like pneumonia may increase.

Foot injuries are frequent in all types of livestock facilities. Wear safety shoes or boots. Composition and type of sole configuration also are important to combat the problems of uneven and wet footing.

If you must enter a manure pit or silo without a self-contained breathing apparatus, turn on all forced ventilation equipment for a minimum of 30 minutes.

Wear a harness or tie a rope around your waist and have at least one person holding the lifeline. If you are overcome by the gas, this lifeline is your only means of rescue without endangering other people.

A self-contained breathing apparatus is recommended, but its high cost may make it impractical to have this equipment readily available on most farms.

Partial funding for this guide sheet was provided by  MU/National Institute for Occupational Safety and Health Cooperative Agricultural Promotions Agreement.