The movement of crop protection materials away from their intended target poses several possible problems. Besides the economic damage to nearby susceptible crops, possible problems include less effective weed control, airborne contamination of streams and lakes, and the social and financial costs resulting from the accidental damage that drift can cause to a neighbor's ornamental or commercial plants.

Minimizing drift is a moral responsibility to neighbors and it is in one's own ethical and financial interests to protect neighbors from the potential for damage to their crops, landscape plants, gardens, lawns, and other vegetation. Drift damage to neighboring vegetation can be a serious problem depending on how that vegetation is valued and whether the damage is permanent or temporary. Crop protection materials are also poorly understood by the public, which causes anxiety and sometimes overreaction to a problem. Drift can lead to litigation, financially damaging court costs and appeals to restrict or ban the use of crop protection materials.

The most serious consequence of drift is the long-term effect it can have on the legal restrictions placed on the use crop protection materials. Applicators have both a legal and ethical obligation to minimize the chance of off-target placement of herbicides. Controlling drift is a win-win activity. Properly placed crop protection materials reduce costs, protect the environment and preserve the use of these materials to provide for a safe, healthful and abundant food supply.

Drift is the movement of crop protection materials from their intended target to any other area. Drift is sometimes referred to as off-target placement.

Drift can be classified broadly into two categories — vapor drift and particle drift. The more common problem is particle drift, which occurs when small droplets are blown off-target by the prevailing wind. Damage to nontarget susceptible vegetation from vapor drift is a less common problem, but can have devastating effects on areas remote from the application site.

A small amount of vapor is formed during any spraying application and usually disperses into harmless concentrations. A concentration of vapors sufficient to cause serious damage to nontarget plants is most likely to occur when winds are calm. The surprising conclusion is that light winds also warrant special precautions.

The classic example of vapor drift is herbicide damage to plants not adjacent to the application area. Vapor drift has been known to affect areas as remote as several miles from the target. Hence, the source and cause of damage to areas affected by vapor drift can be difficult to resolve and vapor drift is suspected when all other logical explanations have failed.

Although serious problems due to vapor drift are somewhat rare, the cause of vapor drift is associated with a common atmospheric condition known as a temperature inversion, where surface air is cooler than air immediately above. The stability of an inversion reduces mixing and allows concentrations of vapors to form above the ground. These concentrations may move slowly across the landscape until they encounter more unstable air, where they may be deposited in a large enough concentration to damage susceptible nontarget plants.

Temperature inversions, as the name implies, are a reversal of normal daytime temperature gradients in the atmosphere. During daylight hours, especially under full sun, temperatures decrease at higher altitudes. Radiant energy from the sun warms the earth by warming the soil and other surfaces. Hence, the usual condition is for air temperatures to be warmer near the ground. Because warm air rises, this condition causes the air below to mix with the air above. The mixing air causes vapor to disperse and become dilute.

A temperature inversion occurs when heat is radiated away from the earth during the night to the relative darkness of space. Surface air becomes cooler and denser than air in the upper atmosphere. When cool air is already lower than warm air, the air is stable and doesn't mix well. The stable air of an inversion causes the air to stagnate and allows vapors to become concentrated near the surface.

Temperature inversions are most likely to occur whenever the sun is low or at night. Recognize the potential for an inversion when winds are light or undetectable, especially during early morning hours after a clear night. Use caution when you suspect an inversion. A smoke trail provides good visual evidence of how vapors will behave. Light a smoke bomb and note the direction and behavior of the smoke. Smoke that rises and disperses is a good sign. Smoke that travels slowly near the surface indicates that conditions are favorable for vapor drift. An hour of bright sun or a 5- to 10-degree temperature rise in the morning is usually enough to break up an inversion. Heavy cloud cover during the night acts as a blanket, which reduces radiant cooling of the earth's surface and reduces the potential for an inversion.

Vapor drift can occur with all product formulations, but is generally higher for more volatile spray formulations, e.g., esters as opposed to amines. A volatile formulation readily evaporates into small particles that are affected more by air movement than by gravity.

That old saying often heard when small rains come when it's hot and dry — "That little amount of rain we got evaporated before it hit the ground" — has some truth to it. Hot, dry air increases evaporation rates and quickly reduces droplet size, increasing the risk of drift. Spraying when temperatures are cool and humidity is high, such as during the morning hours minimizes volatilization. Wet soil increases the rate of volatilization and decreases the effectiveness of soil incorporation; both effects increase the risk of vapor drift of soil-applied volatile herbicides.

Particle drift is the most recognized type of drift. Although drift can't be eliminated, particle drift can be reduced to very low levels through proper nozzle selection, equipment operation and other management choices.

Nozzle selection affects practically every aspect of particle drift. Various nozzles are available providing many choices of droplet size and spectrum. Ideally, nozzles should produce only a narrow range of droplet sizes. However, in addition to droplets about the right size for good coverage for a particular application, nozzles generally produce a few larger droplets and many smaller droplets that are prone to drift.

The term volume median diameter (VMD) is used to indicate the relative droplet size of a volume of spray from a nozzle. Droplet size is measured in microns. A micron is one millionth of a meter. A human hair is about 100 microns thick and not too difficult to see because it has length. Without a magnifying glass, though, particles or water droplets less than 100 microns in diameter are practically invisible. 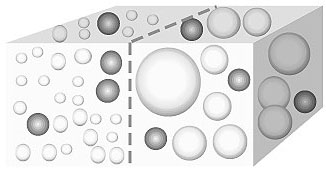 Figure 1
Many droplets in any given volume of spray have a diameter similar to the volume median diameter, or VMD (the dark droplets). Because the majority of droplets are smaller than the VMD, choose a relatively large VMD to minimize the number and volume of small droplets.

The best droplet size for a particular application is a compromise between drift reduction and adequate coverage. Particularly, droplet size should not be smaller than that adequate to obtain good coverage, because droplets that are too fine typically never reach the target anyway. The generally accepted values for various products are shown in the following table.

Droplets with a diameter of 200 microns are generally considered the smallest droplets useful for herbicide applications. This threshold is determined in part by the practical setup of a spray boom with operating characteristics that provide uniform coverage. For booms with nozzles on a 20- or 30-inch spacing and with fan angles of 80 or 110 degrees, a boom height of 18-19 inches above the target is generally recommended for ideal overlap. The smallest droplet that has a reasonable chance to reach the target is about 200 microns in diameter.

Although boom height can be logically determined using information about proper overlap (100 percent for fan nozzles), nozzle spacing, and fan angle, no exact recommendations about boom height are usually made. Besides, when spraying in a canopy, just what is the target? — the top — the middle? It's not even clear that there is a single best recommendation for nozzle spacing, fan angle and boom height. For nozzle selection, one philosophy for minimizing drift favors producing larger droplets and concludes that the 80-degree fan operated at the proper height is superior. Another philosophy for minimizing drift favors moving the boom closer to the target and concludes that the 110-degree fan operated closer to the target for correct overlap is the superior choice. It is sufficient to say that when you are measuring from the top of the canopy, it is almost always better to be a little bit closer than your calculations indicate. This minimizes the distance that a droplet must travel before it reaches some part of the target.

Most nozzles can provide an acceptable range of droplet sizes when operated within their rated pressure range and especially when operated near the low end of that range. Still, some nozzles have superior operating characteristics. Select a nozzle based on its intended use and the rate of flow that the nozzle is expected to supply. Select a nozzle large enough that the operating pressure is near the low end of the rated pressure range. Environmental Protection Agency registration labels for some herbicides specify nozzle type and sprayer pressure range, as well as which additives may be used and maximum wind speeds in which applications can be made.

The usual forces that determine the course and final destination of a spray droplet are the initial momentum of the droplet, the resistance encountered as it travels through the air, and gravity. New technologies designed to improve spray deposition or reduce drift either add a new force or control an existing force.

Drift can be controlled by:

Following are specific strategies for achieving those goals.

This publication was developed in cooperation with the U.S. Department of Agriculture through Grant number U-5-37989, Air Quality Regulations and Missouri Agriculture.