Excessive seepage from farm ponds is a serious problem in several areas of Missouri. Seepage can be caused by many conditions, such as highly permeable soils, continuous sand or gravel seams, highly permeable bedrock and residual rock layer, and in a few areas, sinkhole collapses in the pond pool area. This publication focuses primarily on seepage that results from permeable soils.

Proper planning often can prevent locating a pond or lake in an unsuitable area. A soils investigation using a backhoe should be considered for any questionable site. A site investigation by a geologist or soil scientist may result in early detection of limitations before construction dollars are spent on the site.

Sometimes no completely satisfactory sites are available, or a landowner's desire for a pond outweighs the problems of construction on a site with known limitations. It may still be possible to construct the pond if extra care is taken to counter the problems. Here especially, a site investigation is needed. Reducing seepage is difficult after a pond is partially filled.

Dull coloration or mottling in a soil is a result of poor drainage, but bright coloration is an indication that the soil is well drained. It is common to find bright red subsoil in southern Missouri. Many of these soils are high in clay content but still permeable because of the structure and clay mineralogy of the soil. In general, these soils will "ribbon" and feel like suitable building material. It is difficult to make any prediction on using these soils for ponds. While they often do not hold water, some seal satisfactorily. The very small clay particles form clusters, acting more like coarse sand or fine gravel than clay. Several methods will be discussed later that have proven effective in breaking up these clusters (flocculated particles).

Other soils that have contributed to seepage are the loess soils along the Missouri and Mississippi Rivers. These soils will normally classify as lean clays but have a structure that causes vertical leakage. The worst problems with loess soils occur within one or two miles of the major river flood plains, where the loess is thickest and most coarse.

A lowered water level does not always indicate a seepage problem. In Missouri it is possible to have high evaporation rates of half an inch per day, and rates of one quarter inch per day are common during the hot parts of the summer. Ponds will always lose water during the first fill, because water is absorbed by the embankment and the soils under the reservoir. It may take a couple of years for the "water mound" to form beneath many pond sites. One way to determine the total is by marking the water level in the pond at two different times, when no rainfall or inflow occurs in the interval between markings. The vertical change in water level divided by the interval is the total loss rate. Subtract the estimated amount of loss due to evaporation during this interval to obtain an estimated seepage loss. Seepage loss of 2 inches or less per month should be considered acceptable.

Unacceptable seepage losses could be caused by any number of problems. Assistance in evaluating the problem is available from either the MU Extension or the Natural Resources Conservation Service (NRCS). If the problem is a result of permeable soils, various methods may be used to seal the pond site. These methods include compaction, blanketing and use of bentonite, dispersants and flexible membranes.

Compaction
Compaction of a pond site can be achieved by using specially designed machinery, such as a sheepsfoot roller (Figure 1), or by tracking with rubber-tired vehicles. Sheepsfoot rollers can exert approximately forty times more pressure than rubber-tired equipment and are often specified where a high degree of compaction is needed. 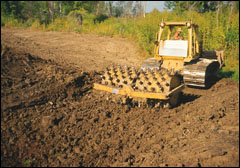 Figure 1
A sheepsfoot roller provides the high degree of compaction often necessary to seal permeable soils at a pond site.

Optimal compaction is obtained by using thin layers of soil, each about 6 inches thick. Thicker layers are not desirable, as the pressure transmitted to the soil decreases with soil depth.

Loess soils should be treated by deep disking or chiseling the entire pool area, then recompacting with a sheepsfoot roller. This will help to break up the vertical structure of the soil and greatly slow leakage.

A high degree of compaction will break down most aggregated or flocculated clay particles and make them less permeable. Experts disagree about how long the particles will remain unaggregated. Cycles of drying and wetting or freezing and thawing may cause reaggregation of the particles.

Livestock can also be effective in compacting the soil, and it is common to fence hogs or cattle into a pond site and keep them there until a seal results. The animals should be removed after the seal is obtained, to minimize damage to the pond slopes and spillway.

Blanketing
When the soil material (or in some cases, rock materials) exposed in the pond bottom and sides is permeable but does not respond to compaction, one remedy is to blanket the exposed area with suitable soils. Soils with little or no cohesion, such as coarse silts, sands and gravels lacking fine-grained particles, often require blanketing. Fractured and jointed bedrock is also a candidate for blanketing. The material brought onto the site should be compacted in layers and should be plastic enough to be relatively impervious after compaction.

The feasibility of blanketing depends on the cost of hauling suitable material to the site. The closer a source of good material, the lower the cost.

Bentonite
Permeability of coarse-grained soils (sands and gravels) can be greatly reduced by mixing the soils with bentonite. Bentonite is a clay with a high shrink-swell ratio. It can be mixed with existing soils and compacted in layers. Upon wetting, the bentonite will swell to many times its dry volume. This action tends to seal soils that lack clay-size particles. Bentonite is most effective on soils that contain less than 50 percent fines and with plasticity indices less than 15. [There are two varieties of bentonite:

Only sodium bentonite should be used for pond or reservoir sealing.

Application rates for bentonite should be based on laboratory tests. These can be obtained by contacting the local NRCS office and asking to have a pond-sealing sample collected. In the absence of this data, the recommended rates vary from one pound per square foot for a soil with some clay, up to 3 pounds per square foot for a sand-gravel material. This rate is for each 4 inch lift. The minimum thickness of the finished, treated blanket should be 4 inches for water depths up to 8 feet. Additional thickness should be provided for greater depths and for areas subject to wave action.

Bentonite may be obtained from agricultural chemical suppliers, feed and grain elevators and well drilling suppliers. Typical prices in 1997 ranged from $8 to $10 per 100-pound bag. Fine-powdered bentonite costs less than coarse, granulated or pelleted forms, and is better for spreading on soils. Coarser bentonite should be used only where a known zone of leakage is observed (whirlpool effect). Bentonite should not be broadcast on the water surface. The pool should be dry before application.

Dispersants
To seal pond sites in the bright red "problem" soils of southern and eastern Missouri, it is generally necessary to add a chemical dispersant. As with bentonite, these chemicals should be thoroughly incorporated into the soil (Figure 2). Dispersants change the soil structure, replacing a bivalent calcium ion with a monovalent sodium ion. Chemical additives work only when the clay particles are present in clusters. For best results with chemical sealing, the soil should be fine grained with at least 15 percent finer than clay size (0.002mm). Soluble salts should be less than 0.5 percent of dry soil weight. 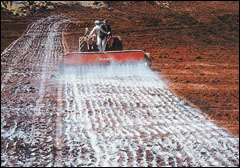 Figure 2
Dispersants such as sodium tripolyphosphate (STPP) may be spread and then disked into the soil before compaction to seal a pond bottom.

The chemicals and rates shown in Table 1 are recommended in the absence of laboratory test data (lab testing is preferred). The rates apply to each 6-inch lift.

Agricultural chemical suppliers in major cities may be contacted for these chemicals. The cost per square foot for dispersants is usually much less than for bentonite. Dispersants should be mixed in 6-inch lifts of soil and compacted. The amount of compaction will affect the permeability rate. The minimum thickness of the finished treated blanket should be 6 inches for water depths of 8 feet or less and proportionally thicker for greater water depths.

Sediment-coagulating chemicals, such as gypsum or iron sulphate, should not be used to clear water after treatment.

Mixing soil amendments and compacting
Mixing can be accomplished using a disk, rototiller, pulverizer or similar equipment. A second mixing should be perpendicular to the first pass.

If the soil moisture is inadequate for maximum compaction, water should be added by sprinkling during the mixing operation. If the moisture content is too high, the soil can be dried by disking. Moisture is usually near optimum if the soil can be formed into a durable ball when compressed in the hands.

Final compaction with a smooth roller or rubber-tired equipment may be preferable to finishing with a sheepsfoot roller, especially on shallow treatments. Also, the seal must be protected from livestock trampling. This is to prevent penetration of the thin layer.

Flexible membranes
Polyethylene, vinyl and butyl rubber membranes, when properly installed, can be used to prevent seepage. The membranes must be protected from puncture during installation and use. The minimum recommended thickness for lining materials is given in Table 2.

After the site is prepared for sealing, it should be allowed to dry until the surface is firm and will support workers and equipment during installation. If the material over which the lining is to be placed is stoney or very coarse, it should be covered with a cushion of fine-textured material.

Bank side slopes and fills should be uniformly sloped no steeper than 1 to 1 for exposed lining, and 3 to 1 for earth-covered linings to prevent sliding on the lining. Nutgrass, johnsongrass, quackgrass, saltgrass and certain other plants penetrate both vinyl and polyethylene film. If these are present, it is best to sterilize the subgrade, particularly the side slopes. Secure the lining by burying the top 8-12 inches in a trench 8--10 inches deep and about a foot wide. The trench must be located above the usual waterline, and the backfill should be compacted.

Because of their weakness, all polyethylene and vinyl membranes should be protected from damage by a cover of earth not less than 6 inches thick. Butyl rubber membranes need not be covered unless the area is subject to damage by livestock or to danger from puncture by swimmers or fishermen. To protect against livestock, swimmers and fishermen, a minimum of 9 inches of earth or a mixture of earth and gravel should cover all types of membranes. The bottom 3 inches should be no coarser than fine sand. All earth covers must be free of large clods, sharp rocks, sticks and other objects that could puncture the membrane, and they must be carefully placed.

Note
Mention of the following sources is not meant to imply a recommendation or endorsement of these sources over other sources by MU or the Natural Resources Conservation Service.

This guide was written and produced in cooperation with the Natural Resources Conservation Service.