The horn fly, Haematobia irritans (Linnaeus), was introduced into the United States more than a century ago. Since then, it has become one of the most important fly pests of pasture and range cattle. Although most cattle can tolerate up to 200 horn flies without showing economic losses, larger numbers of these flies decrease cattle weight gain and milk output.

Male and female horn flies feed on blood by using rigid mouthparts underneath their heads. This feeding activity is painful and annoying to cattle. Horn flies congregate on the backs of cattle, often clustering on the midline and spreading down the sides. Sometimes, horn flies settle around the bases of horns, and when the weather is hot, they may move onto the belly.

After the flies feed and mate, the female is ready to deposit eggs. She moves to the rear of the cattle host, flies to the ground as the animal defecates, and becomes covered by dung. This activity occurs frequently during early morning.

Horn fly eggs are small, reddish-brown and generally laid in clumps on grass and other vegetation covered by the cow pat. After a time, which varies depending on temperature, the eggs hatch, and maggots develop in the dung. When mature, the maggots pupate in or below the pat, and later, emerging adults disperse to seek cattle hosts. As summer progresses, more horn fly eggs develop but mature only to the pupal stage. Rather than emerging as adults, they overwinter (diapause). Diapausing pupae produce adult horn flies the following spring.

Horn flies have been controlled with insecticides since the early 1950s. Sprays, rub-ons or pour-ons were effective, but many insecticides, such as DDT and toxaphene, are no longer permitted. Now, applicating devices, such as cable backrubbers and dust bags, are popular for horn fly control because they require little labor on the behalf of humans. When these systems are charged with effective insecticide and properly situated, the cattle treat themselves. Although many systemic insecticides show an effect against horn flies, most (such as ivermectin) are too costly for the frequent reapplications required.

Insecticide-impregnated ear tags are popular for controlling horn flies on cattle. These tags generally employ pyrethroid insecticides and, until recently, gave almost complete control of horn flies for a summer season. Resistance to the pyrethroids developed in southern horn flies, however, and spread northward. By 1986 resistance was reported as far north as the Canadian border. Cattle producers dissatisfied with the performance of insecticidal ear tags requested information about alternative control methods.

Overview of the horn fly trap

In the 1930s, U.S. Department of Agriculture entomologist Willis Bruce became interested in designing a walk-through trap for horn flies. He experimented with several designs, perfected one and deposited schematic drawings and an explanation of his trap with the National Agricultural Library in Maryland.

Soon after Bruce completed his experiments, however, the United States became involved in World War II, and few people were thinking about horn fly control. After the war's end, DDT and other pesticides captured the attention of the public and the entomological and agricultural communities. Bruce spent the rest of his career working with pesticides and studying their use for horn fly control. Researchers paid little attention to walk-through fly traps, however, until Clyde Morgan and Gus Thomas of the USDA noticed Bruce's paper during the 1970s while they compiled a complete bibliography on the horn fly. By 1986 the problem of horn fly resistance to pyrethroids was widespread enough in Missouri to warrant re-evaluation of Bruce's trap design.

How the trap works

Bruce's trap is a walk-through system. Cattle enter through either end, pass through the 10-foot trap and contact a series of strips made of canvas or old carpet. These strips dislodge most of the horn flies on the animals' backs and sides. Because flies are attracted to light, they travel toward the screened sides of the trap. The animal exits the trap with fewer flies on it, and the trapped flies cannot escape. Repeated use of the trap can reduce the overall local population of horn flies.

Three trapping elements along each side of the trap catch flies by the "inverted cone" principle, similar to a minnow trap, upon which many insect traps depend (Figure 1). The trap forces insects to crawl from a large opening through a small one. A zigzag screening in the trapping elements functions as the cone (Figure 2). The triangular shape formed by the bending of the screen makes alternate large ends that face the interior of the trap and small ends that face the outside of the trap. 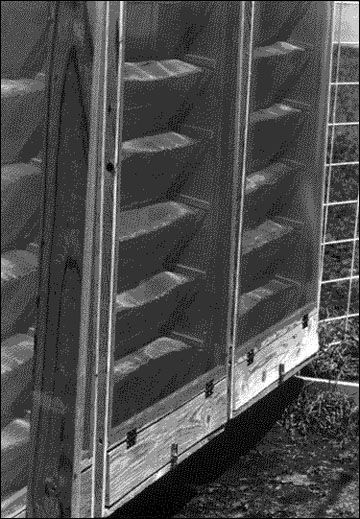 Figure 1
The trapping elements are in place, as viewed from the side. These elements are held into the framing with screw hooks and eyes and can be removed for maintenance. 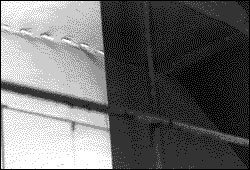 Figure 2
An interior view of the trap shows the screen placement in a trapping element. The screen is stapled to 3/4-inch by 3/4-inch wood strips that are nailed to the sides of each element.

Holes punched through the small end of the triangle permit the flies to crawl toward the outside of the trap (Figure 3). There, the screening on the exterior of the trapping element interrupts the flies' progress. It traps flies between the exterior screen on one side and the zigzag screen on the other. Because the cone now faces the wrong way for the insects — that is, the small end faces them — it is unlikely that many will find the holes and escape. 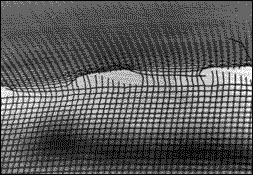 Figure 3
In this close-up view, notice the holes (1/4 inch by 1/2 inch) punched through the apex of the screen inside trapping elements. The flies crawl through these holes and cannot find their way back out.

Construction of the trap

When building a trap, remember that lumber that is pressure-treated to resist rot will outlast untreated wood and does not require painting. You can use standard-sized lumber, screening and other items where possible. (Figure 6 has a cutaway view of the trap.) You can get most of the materials easily from lumberyards, farm supplies or hardware stores. and you can get a PDF of blueprints for the trap.

Making the frame of the trap from welded square steel makes the strongest trap.

The Bruce trap is best employed in a forced use situation where cattle must pass through it on a regular basis (Figure 4). In this respect, placement is like that for dust bags and backrubbers. The best site for placement of the trap is between pasture and the source of water. 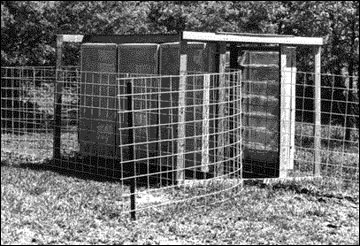 Figure 4
In this completed horn fly trap, heavy wire panels funnel cattle through the trap. The trap itself is placed in a fence line with a watering pond on one side. The canvas curtains inside the trap have been removed in this photograph.

You can often use fence line to route cattle through the trap, and you can easily move electric fencing. As shown in Figure 4, you can use wire cattle panels to funnel cattle into the trap. If you cannot easily fence off the water source, you can encourage use of the trap with mineral blocks or a mineral station. Molasses blocks, or addition of loose molasses to mineral, also increase use. Putting mineral in an enclosure with entry through the trap is an effective technique.

If cattle are reluctant to enter the trap, it may be necessary to remove most or all of the canvas strips, and then to replace them one at a time after the cattle overcome their shyness. Corn or other feed can be used as bait to draw cattle into the trap. After cattle are accustomed to the trap, they often pass through it several times a day and seem to realize its benefit.

Although the trap design incorporates clean-out doors at the bottom of each trapping element, scavenger insects soon inhabit the trapping elements and eat the dead flies (Figure 5). It may be necessary to wash the element screens clear with water if they become clogged with mud and debris. The only other maintenance required is periodic inspection and repair of the trap as needed. 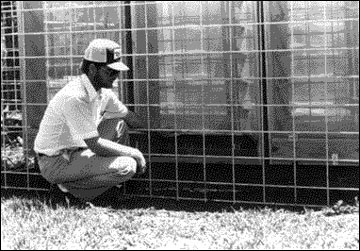 Figure 5
The elements can be cleaned while on the trap or can be removed for convenience. Scavenger insects make frequent cleaning of the elements unnecessary. Be careful of wasps that may construct nests between the elements. 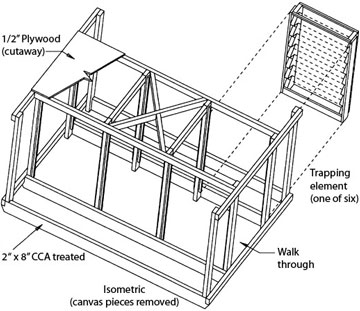 Figure 6
A cutaway view of the horn fly trap shows how the trapping elements are placed along its side. The frame is made from standard-sized CCA treated lumber, and the end framing is extended laterally to provide stability. The top is made from plywood. The canvas strips have been removed for clarity.

Performance of the trap

Field studies conducted in central Missouri during 1986 indicated the trap produced roughly 50 percent control of horn flies when averaged over the season. This level of control was less than that afforded by insecticidal ear tags and some other treatments but maintained horn flies below the injury level of about 200 flies per animal.

Similar results were obtained by David L. Lindell, regional extension specialist, during 1994-95, when field trials with two horn fly traps during the latter season averaged 40 percent control. Reports of these tests can be obtained from him at Courthouse, Room 16, 100 W. Franklin, Clinton, Mo. 64735.