The term “broadband” refers to relatively fast internet connections for sharing information. The Federal Communications Commission (FCC) defines broadband as an internet connection with at least 25 Mbps (megabits per second) of download speed and at least 3 Mbps of upload speed — often known as 25/3. As of this writing, most FCC-subsidized new internet infrastructure has been for networks capable of providing at least 100 Mbps of download speed.

Practically, 25/3 serves as a moderate speed suitable for one or two individuals browsing the internet, using email, streaming standard-definition videos and playing basic online games (Table 1). Given how the COVID-19 pandemic changed internet connection needs, the 25/3 broadband threshold may seem inadequate, yet 37% of Missourians do not have it at home. If a household has multiple users accessing one connection at the same time — especially for learning online, telecommuting or streaming high-definition video — the 25/3 threshold is likely insufficient.

Broadband internet’s definition has evolved to reflect the increasing demand for faster connections. Since 2015, 25/3 has been the FCC definition. The download speed — here, 25 Mbps — has historically been much higher than the upload speed — here, 3 Mbps — as households downloaded much more than they uploaded. Two present-day situations, however, change this connection speed needs: 1) more teleworking and at-home online learning and 2) multiple people in a household using broadband services simultaneously.

As part of a national pilot project, University of Missouri System researchers in partnership with MU Extension and other stakeholders will soon implement a novel broadband network in Turney, Missouri — a community located in Clinton County. The project is novel as it is using fixed wireless, an intelligent router to balance bandwidth needs and unlicensed long-term evolution (LTE) that uses the same frequency channels as Wi-Fi. This system is cheaper than the LTE cellular companies use because it is unlicensed.

The community currently has low broadband access — 18% to 36% of the area is unserved or underserved, and less than 40% of the county population has adopted broadband. The fixed wireless transmitter will be situated at the highest point of a cooperative’s grain elevator, and it will transmit a broadband connection to Turney’s 148 residents.

Fiber is currently the preferred internet delivery technology because it carries the greatest potential for reliably transmitting large amounts of information. Fiber service has a high cost, however, because it uses dedicated infrastructure composed of fiberoptic cables.

Conversely, cable and DSL connections rely on existing infrastructure but can be slower. Cable uses the same coaxial cables that deliver cable television service to many households. It is considered suitable for most broadband connections. Less preferred than fiber or cable for internet access, DSL uses traditional copper telephone lines to supply internet service.

For many rural residents and businesses, fixed broadband is not available. They may only have high-Earth orbit satellite technology as a broadband option. Satellite connections cut out the costliest portions of wireline infrastructure — the poles, wire, pole attachments and their associated costs and fees. However, satellite has latency problems (i.e., short delays), low reliability with respect to providing a stable connection through changes in topography and weather conditions and data caps. These issues make it an inferior technology for connecting to the internet.

Finally, some households access the internet through cellular service plans and smartphones or portable hotspot devices. In particular, consumers widely used hotspots during the COVID-19 pandemic to provide short-term internet access. In general, however, smartphones and hotspots are not viewed as long-term solutions to inadequate broadband access because they are not reliable, fast or cost-effective enough to meet most home and business needs.

One company, SpaceX, has focused on overcoming the limitations observed with high-Earth orbit satellite connections. It is using satellites located closer to Earth to reduce delays. The Starlink satellite broadband system is a high-speed, low-latency (i.e., low-delay) broadband network that aims to bring broadband to the entire populated globe, including rural and remote areas.

Currently in a pilot phase, the project is expected to launch fully during the second half of 2021. According to the Starlink website, current speeds vary from 50 Mbps to 150 Mbps — speeds comparable to those enabled by wired broadband technologies. Current latency is 20 milliseconds to 40 milliseconds — 10 times to 20 times less delayed than traditional satellite internet.

SpaceX does have a key disadvantage — its cost. The equipment is $499, and the monthly subscription fee is $99 — a financial commitment out of reach for many rural residents. Whether the SpaceX technology is scalable is another question being considered.

Broadband availability and adoption in Missouri varies by place 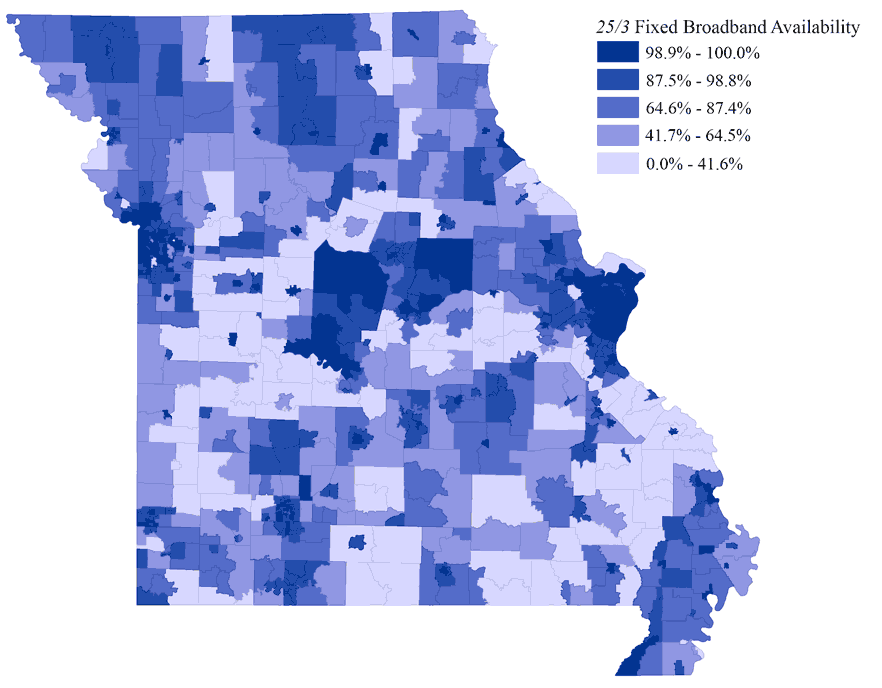 For the U.S., the broadband adoption (Figure 1) and availability (Figure 3) maps look similar, but some differences exist. The Northeast remains high on both measures, and generally, the map shows pockets of high adoption in areas with high availability. Note one difference, however. The adoption map lacks the same level of geographic clustering. You see counties with high adoption surrounded by low-adoption counties. This is particularly evident near cities.

Income drives much of the difference between availability and adoption. If subscription costs are too high, then households will not adopt. 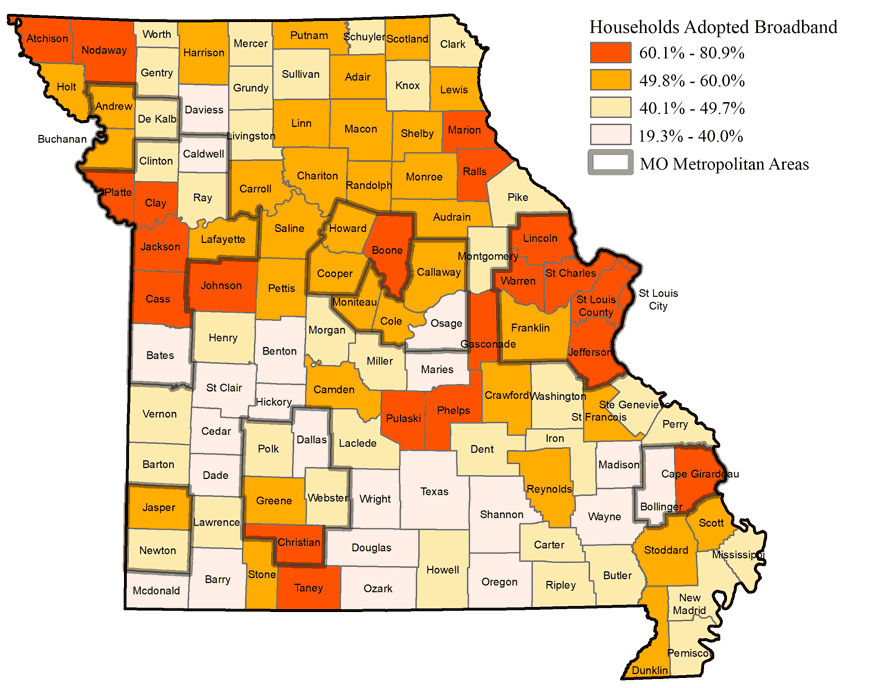 Data on broadband infrastructure availability come from the Federal Communications Commission (FCC) Form 477, but they tend to overstate coverage and speed.1 The FCC data are aggregated from internet service provider reports on whether they could or do serve at least one household or business in a given census block — the source of overstated coverage. Furthermore, FCC reports advertised upload and download speeds, but users tend to report slower speeds. Beneficially, the FCC data are timely — released twice per year with a reasonable lag.

The Census Bureau collects broadband adoption and use data as part of the ongoing American Community Survey (ACS). The ACS asks several relevant questions, including whether households access the internet through paid or unpaid means and which broadband technology households use: cellular; cable, fiber or DSL; satellite; or dial-up service. The ACS data don’t capture broadband speeds, but speeds can be inferred by reviewing the technology used. Unfortunately, for rural areas, these data are compiled from surveys conducted over a five-year period, and the most recent available data are from 2015-19. The five-year period is necessary to provide a sufficient sample size.

Broadband is important to the economy and quality of life

The COVID-19 pandemic demonstrated that households having fast, reliable and affordable broadband access could continue to work, attend school, receive medical consultations and stay in touch with friends and family over the internet. Even before the pandemic began, broadband was increasingly essential for households and businesses alike. Accordingly, quality broadband access (i.e., fixed broadband) plays a crucial role in community resilience.

Costs and geography are barriers to broadband provision

ROI also hinges on the percentage of subscribers who are offered the service and actually adopt it — known by ISPs as the “take rate.” The higher the take rate, the higher the ROI. To break even, many ISPs assume a 30% to 50% take rate. Communities demonstrating a higher potential take rate may be more likely to receive high-speed, fixed internet service (e.g., in Socket Fiberhoods, the infrastructure may be built after a certain share of neighborhood residents request the service).

Additional barriers to broadband service provision include existing infrastructure, land ownership and geography. Common questions include who owns existing poles, and how much are pole attachment fees? Additionally, building infrastructure through federally owned land, wetlands and rocky or hilly terrain will cost more than on flat cropland where an easement exists. 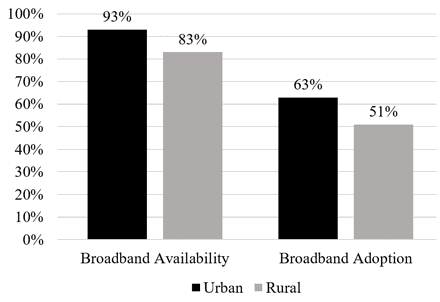 Figure 5. Broadband availability and adoption in urban and rural U.S. counties. (Source: MU Extension Exceed graph using FCC Form 477 data from December 2019 and ACS data from 2015-19. Availability and adoption include only fixed wireline technologies.)
Note: Counties are classified as urban if they are part of a metropolitan statistical area, and rural counties are nonmetropolitan. These numbers are county averages unweighted by population and thus may differ from top-line FCC estimates.

The price of broadband service discourages adoption for many consumers, particularly lower income households. Even if broadband internet infrastructure exists, monthly subscription costs, one-time installation fees and the expense incurred to buy a reliable computer create barriers. Although imperfect, the broadband adoption maps (Figures 3 & 4) show trends toward lower adoption in many areas despite availability. The data in Figure 5 confirm this issue; broadband adoption lags availability in urban and rural counties. Some of this lag may be explained by the differing time period between the datasets, but it otherwise suggests that price may be a barrier in urban and rural counties. Economics suggests that competition (i.e., multiple ISPs) will decrease subscription costs. Another adoption barrier may be digital literacy, defined as one’s ability and confidence to navigate and utilize the internet.

In summary, because of high broadband investment costs and their low population density, communities located in the “last mile” to a provider can have very low if not negative ROI. However, increasing broadband adoption will likely enhance the ROI that ISPs can capture and increase a provider’s ability to offer service to additional households. By incentivizing increased broadband adoption and lowering the cost of ISPs’ infrastructure, policies and programs can increase provider ROI and spur gains in broadband availability.

Access to accurate broadband availability data supports increasing broadband access. That’s because fixing access problems requires first understanding where the problem is acute. Unfortunately, federal broadband data tend to overstate coverage and available speed. (See Broadband Availability and Adoption box). Passed in 2020, the Broadband DATA Act attempts to remedy this issue by requiring the FCC to improve the accuracy of its broadband data and maps — namely through data verification processes. It also requires FCC to build a Broadband Serviceable Location Fabric that identifies all potential buildings that may need a broadband connection.

Recent research provides evidence of state broadband funding programs’ effectiveness8. In Missouri, one prominent initiative is the Missouri Broadband Grant Program. Started in 2018, the program awards grants to help broadband providers, communities and regions make broadband infrastructure investments in unserved and underserved parts of the state. The funding may support broadband installation and related activities such as permitting, installation and planning. Organizations eligible for funding include corporations, nonprofits, electric cooperatives and communities.

Encouraging municipal broadband provision is another strategy worth consideration. Recent research found that removing state municipal broadband provision prohibitions increased availability by 3 percentage points in the state8. As an example, Houston, Missouri, recently began providing municipally owned broadband. A core fiber ring was installed around the city in summer 2020, and residential installation followed. Speeds of up to 1,000 Mbps are offered.

Because communities have different physical, economic and cultural environments, effective broadband plans may vary by region. However, regions that have successfully increased broadband availability and adoption share a common thread — community-led, collaborative action.

For resources on how to improve your community’s digital connectivity, see the UM System’s Digitally Connected Community Guide. It seeks to empower individuals to collaboratively create digitally connected communities. It covers topics such as how to engage stakeholders, how to conduct community needs assessments and how to identify public-private partnerships.

Through a workshop held in June 2020, a plan to help the county increase its broadband availability emerged. Recommended strategies included seeking out public-private partnerships (particularly with ISPs), implementing one broadband technology versus many technologies and overcoming ROI investment barriers by pursuing external funding opportunities.

University of Missouri System in cooperation with MU Extension has several resources:

Purdue University has a series of training programs aimed at increasing digital inclusion. Some target individuals, and others target communities, community leaders or business leaders. See the programs listing.