Entrepreneurial dynamics — the flow of business startups and business turnover, or churn, in a place — shape economic growth. Entrepreneurs may spark economic growth and development by contributing to employment growth, innovation, quality of life and economic resilience in their communities.

This guide focuses on churn’s role in entrepreneurial dynamics. Churn measures businesses entering and exiting a market. It’s the sum of the startup rate (startups per capita/1,000) and business closure rate (business closures per capita/1,000). It only considers businesses with paid employees. Read more about nonemployer businesses with no paid employees in Missouri Economy Indicators, Issue 9 (PDF).

Areas with high churn — that is, those with rapid business turnover — record faster economic growth.1 However, undoubtedly, a business closure is bad for the particular business’ employees and owner.

Churn creates information as businesses open and close — a process known as creative destruction. A business opening or closing reveals how certain products, business strategies or business sizes perform in a particular place. Others in the region can use this information to improve their own businesses because churn shows what does and does not work in an area.

Low churn yields little new information and may make economic development through entrepreneurship more challenging because less is known, for example, about consumer demand for given services in a particular location. In low-churn areas, new businesses have fewer peers or mentors from which to learn, and obtaining a bank loan can be difficult due to market uncertainty, which creates business plan uncertainty.2

No correlation between entrepreneurship and income growth in Missouri — different from the two factors’ positive correlation found for the U.S. overall — suggests few Missouri entrepreneurs operate in high-value industries or export outside of their region. This is likely due to Missouri’s industry mix being light on high paying white-collar jobs. Creating new jobs, even not high-paying ones, may reduce rural population loss and improve quality of life because people like living near grocery stores, restaurants and other services.

Compared with the national average and neighboring states, Missouri had a high churn rate in 2016 (Figure 1). This generally bodes well for Missouri, given the link between churn and economic growth. Again, churn creates market information that entrepreneurs can use to succeed in business, despite other businesses failing. 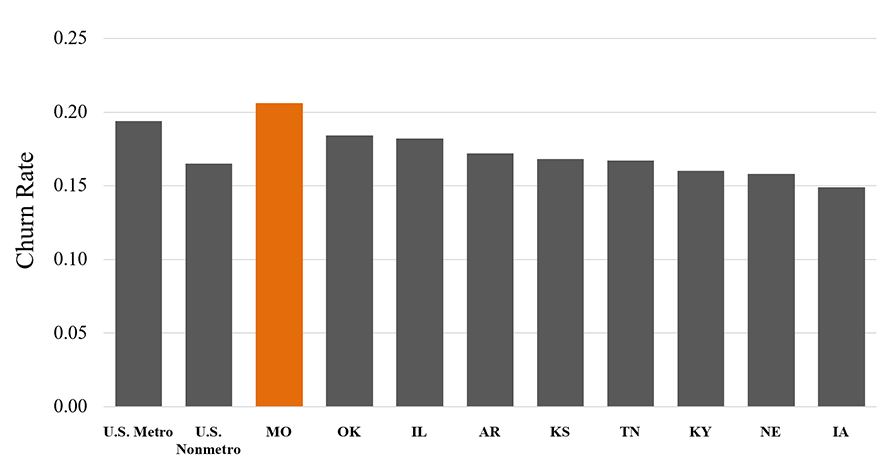 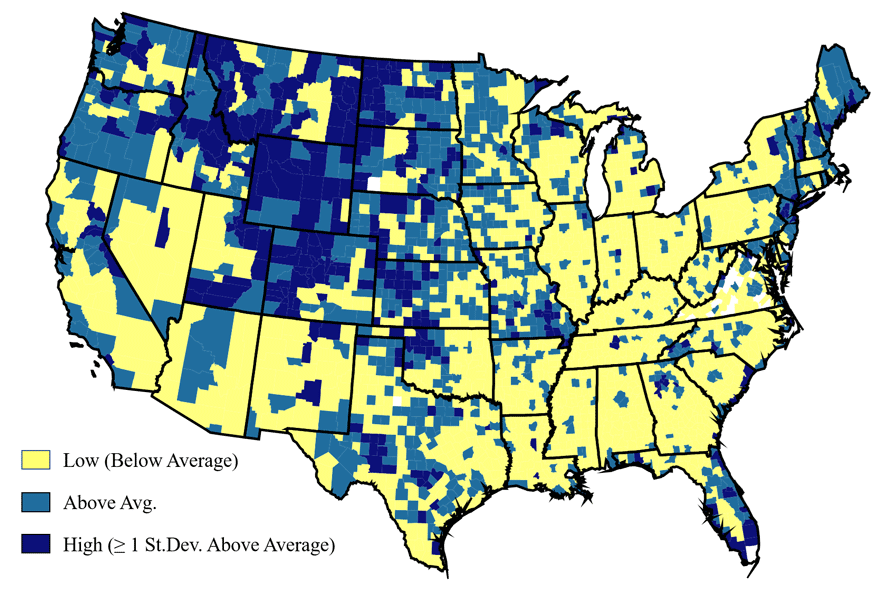 Business churn varying along a state border suggests state-specific factors affect churn. The south and southeast parts of Missouri featured higher churn than adjacent counties in other states from 2013 to 2016. This difference, likely policy-driven, may correspond with an easier process to establish businesses in Missouri or business restrictions in neighboring states. 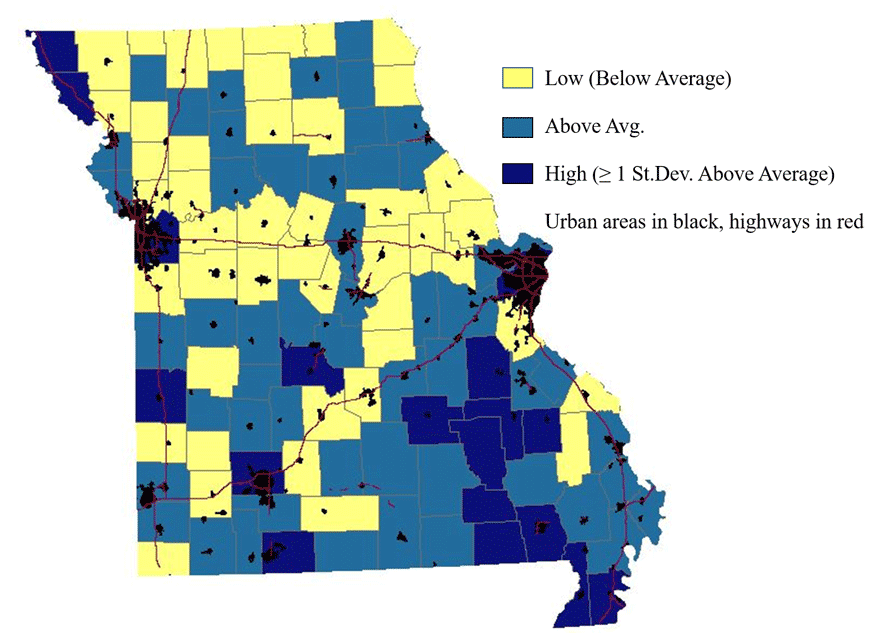 How to interpret churn rates

Carefully consider churn rates from county to county. In sparsely populated counties, one or two new businesses can significantly increase the birth rate, which also increases the churn rate. For example, growing demand for home health care aids, who are sometimes considered employer-establishment businesses in the data but look like nonemployer establishments, can increase churn rates.3 Also, carefully consider churn in counties highly dependent on a single industry — such as mining, agriculture or manufacturing — that may have boom-and-bust periods as prices fluctuate.

The authors thank Alice Roach for editorial assistance and Hannah McClure for production and design assistance. This research was supported in part by the Hammond Institute’s Center for Economics and the Environment, Lindenwood University.