At the consumer level, overall food and beverage spending has been stagnant. However, purchase patterns have shifted. In particular, some consumers have opted to purchase more specialty goods, place-based goods, and goods made by smaller firms. These behaviors raise a question—is food manufacturing, once again, a viable rural economic development strategy? If so, then are food manufacturing startups a natural extension of the dynamic driving interest in local foods at the farmgate?

To answer these questions, an MU Extension faculty member and graduate student partnered with colleagues at Colorado State University and USDA Economic Research Service to discover the agricultural and entrepreneurial characteristics of regions with more food and beverage manufacturing startups. The study is part of a collective effort to define “the locational secret sauce” for food and beverage manufacturing startups. Ultimately, policymakers may use these findings to focus resources toward areas with the greatest potential for startup success. 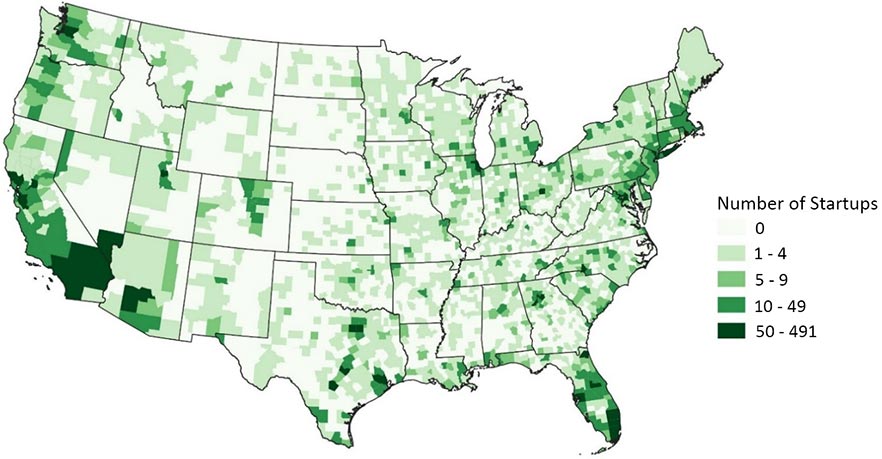 Using 2013 to 2015 data for 13,523 food and beverage manufacturing startups in the U.S. (Figure 1), the study found the following about these businesses:

Farms often engage in value-added food manufacturing activities, such as canning salsa, curing meats, and preparing baked goods, to diversify economically and respond to consumer interests. However, they represent only a small share of the more than 30,000 U.S. food and beverage manufacturing establishments, which reported $877 billion in 2016 sales. According to the 2017 Census of Agriculture, 33,523 U.S. farms (1.6% of total farms) sold more than $4 billion in value-added products; in Missouri, 904 farms (less than 1% of Missouri farms) sold more than $25 million in value-added products.

The study suggests that a culture of food entrepreneurship and proximity to farms aligned with alternative production and marketing activities have been two features common in counties across the continental U.S. where food manufacturing startups have tended to locate. Regarding the location of food and beverage manufacturing startups, the research (Figure 2) also suggested the following:

What do these findings mean?

Given these findings, policies meant to leverage food innovations and entrepreneurship should be intentionally targeted. For example, because the research suggests that regions or states with more organic and local or regional food production have more food and beverage manufacturing startups, focusing food manufacturing support in such regions may more consistently lead to successful food and beverage manufacturing entrepreneurship. Food manufacturing does align with consumer-driven innovations. As a result, policymakers can leverage it or better integrate it into existing grant and business development programs to support farmgate food systems.

This research is especially relevant for economic development policy. Researchers recommend that rural places emphasize their unique assets in order to attract startup food and beverage businesses and grow their economies. In Missouri, agriculture and food are assets. Indeed, Missouri’s lieutenant governor commissioned a task force in 2019 to examine food, beverage, and forest products manufacturing as a policy initiative for the state.

The authors thank Alice Roach for editorial assistance and Hannah McClure for production and design assistance. This research was supported in part by the U.S. Department of Agriculture, Economic Research Service cooperative agreement 58-6000-6-D071, Rural Employment Sustainability and Establishment Dynamics and the Colorado and Missouri agricultural experiment stations and extension services via the National Institute for Food and Agriculture. The findings and conclusions in this publication are those of the authors and should not be construed to represent any official USDA or U.S. government determination policy.