Growing and Marketing Pawpaw in Missouri

Editor's note
This page currently contains only the introductory section of this guide. For the entire text, please download the PDF. 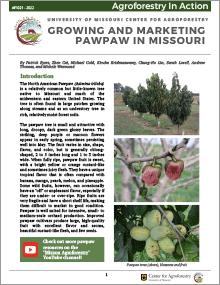 The North American Pawpaw (Asimina triloba) is a relatively common but little-known tree native to Missouri and much of the midwestern and eastern United States. The tree is often found in large patches growing along streams and as an understory tree in rich, relatively moist forest soils.

The pawpaw tree is small and attractive with long, droopy, dark green glossy leaves. The striking, deep purple or maroon flowers appear in early spring, sometimes persisting well into May. The fruit varies in size, shape,flavor, and color, but is generally oblong-shaped, 2 to 5 inches long and 1 to 3 inches wide. When fully ripe, pawpaw fruit is sweet,with a bright yellow or orange custard-like and sometimes juicy flesh. They have a unique tropical flavor that is often compared with banana, mango, peach, melon, and pineapple.Some wild fruits, however, can occasionally have an "off" or unpleasant flavor, especially if they are under- or over-ripe. Ripe fruits are very fragile and have a short shelf life, making them difficult to market in good condition.Pawpaw is well suited for intensive, small- to medium-scale orchard production. Improved pawpaw cultivars produce large, high-quality fruit with excellent flavor and aroma,beautiful custard-like flesh, and few seeds.

Pawpaw has a great deal of potential for inclusion in agroforestry production systems,which are defined as “the designed integration of trees and shrubs with crops or livestock." Asa valuable species native to the eastern U.S.,pawpaw can serve in the role as the main crop or as a supporting tree species, providing a wide range of environmental benefits that add to the conservation value of the overall system.When the focus is on optimizing the fruit production potential, either in an orchard or combined in an agroforestry system (e.g., alley cropping), improved cultivars should be planted in an appropriate spacing in full sunlight, with irrigation and protection from wildlife damage.

One agroforestry practice that is particularly well-suited for pawpaw production is alley cropping, the planting of rows of trees (i.e.,pawpaw or pawpaw mixed with other trees or shrubs) with a companion crop grown in the alleyways between rows. If irrigation is available to avoid competition for water, a berry shrub such as aronia could be planted between trees within the tree row. A wide range of crop options are available for inclusion in the alleyway such as vegetables, low-growing fruits, or cut flowers to provide cash-flow for the farmer before the pawpaw trees become fully productive. Alternatively, pawpaw can bethe secondary crop, inter-planted in a polyculture alley cropping system designed to optimize production of, for example, a tree nut crop. Many of the tree nut crops take a number of years to become productive, plus additional years to reach the full production level and mature canopy diameter. With the nut trees planted on the final optimal spacing (e.g., 60feet for pecan, 40 feet for Chinese chestnut),one to two pawpaw trees could be planted between each. The pawpaw will become productive earlier than the nut trees, but at some point, the shade from the overstory nut trees would result in a decline in the pawpaw fruit production.

With this type of polyculture, consideration should be given to the successional transition through the life span of different species.

In addition to alley cropping, pawpaw can be integrated into riparian forest buffers to add to the conservation value and contribute a secondary production function. In those systems, the higher tree cost for improved cultivars may or may not be justified,depending on the design and maintenance program. Since pawpaw grows naturally in river floodplains, the tree makes an excellent component of a riparian buffer that includes a wide variety of species. Pawpaw thrives in the understory of larger trees, though fruit production would be limited in the shaded environment. The colonies they form by root suckers can help to stabilize the soil, reducing erosion in the sensitive riparian zone.