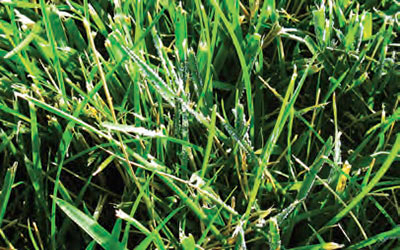 Slime molds do not infect turfgrass and do not cause disease. Slime molds can produce gray, white or even moredazzling yellow and red sporangia on leaf surfaces during periods of high moisture and humidity. Sporulation most often occurs in late spring or early fall but can occur yearround depending on slime mold species. Physarum cinereum has been found most often associated with turfgrass areas in Missouri, producing a gray or white sporangia mass on leaves. Fuligo septica is more often associated with mulch beds and is bright yellow when active, eventually drying out in a large brown mass.

Slime molds are harmless to plants, humans and animals, and no control is necessary. Removal can be accomplished by watering the sporangia off the leaves.