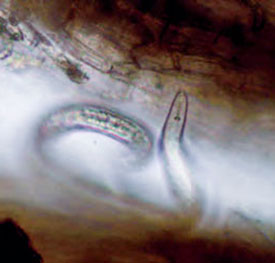 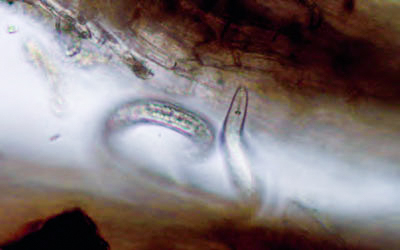 All turfgrasses; most damaging on golf putting greens.

Plant parasitic nematodes are microscopic roundworms that feed on roots and are normal components of the root ecosystem. Due to freezing temperatures and heavy soils, many nematode species parasitic on turf roots in Missouri are not able to reach large enough population levels to cause considerable damage. In certain instances, however, nematode feeding can cause decline during stressful environmental conditions in creeping bentgrass putting greens in sand-based root zones. Large populations of root knot nematodes can cause significant root galling and impair root function. Ring nematodes can also reach population levels at which feeding damage can cause distorted root tips, stubby root appearance and areas of declining turf.

Many nematicides have been removed from the market due to toxicity concerns. During periods of decline, raise mowing heights and perform cultural practices such as light, frequent hand-watering and spoon-feeding to nurse plants with impaired root function through stressful environment conditions.