Blast, also called rotten neck, is one of the most destructive diseases of Missouri rice. Losses due to this disease have been on the increase since 2000. Blast does not develop every year but is very destructive when it occurs.

Rice blast can be controlled by a combination of preventive measures and foliar fungicides applied when rice is in the late boot stage and again when it is 80 to 90 percent headed. When­ever possible, consult an expert in plant disease diagnosis; check with the Delta Center, 573-379-5431, a regional extension agronomist in a county extension center, or the MU Plant Diagnostic Clinic, http://plantclinic.missouri.edu/ in Columbia, 573-882-3019.

Blast symptoms can occur on leaves, leaf collars, nodes and panicles. Leaf spots are typically elliptical (football shaped), with gray-white centers and brown to red-brown margins (Figure 1). Fully developed leaf lesions are approximately 0.4 to 0.7 inch long and 0.1 to 0.2 inch wide. Both the shape and the color vary depending on the environment, age of the lesion and rice variety. Lesions on leaf sheaths, which rarely develop, resemble those on leaves.

The most serious damage occurs when the fungus attacks nodes just below the head (Figure 2). The stems often break at the diseased node. This stage of the disease is referred to as “rotten neck.” Disease in the node prevents the flow of water and nutrients to the kernels and they will stop developing. Heads of plants damaged in this way may be completely blank (Figure 3) to nearly normal, depending on the stage of head development when infection occurs. The poorly developed grain usually breaks up badly in milling, reducing quality. 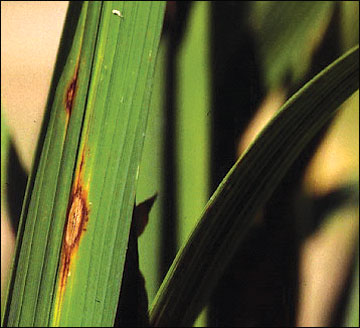 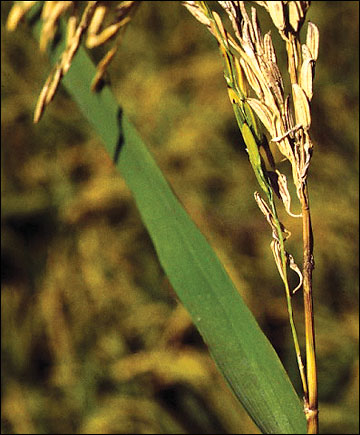 Figure 2
The most serious damage from rice blast occurs when the disease attacks the nodes just below the head, often causing the stem to break. 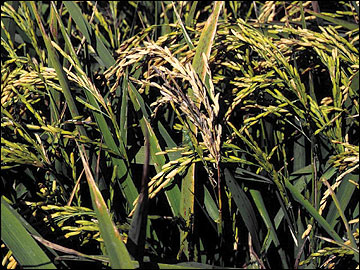 Figure 3
Blast damage at the nodes disrupts the flow of water and nutrients to the kernels, halting their development.

This disease is caused by a fungus named Pyricularia grisea, which overwinters in rice seeds and infected rice stubble. The fungus reproductive structures, spores, can spread from these two sources to rice plants during the next growing season and initiate new infections. Spores from these new infections can spread by wind to other rice plants over great distances.

There are several races of Pyricularia grisea. Race 1B49 has been found in Missouri, but it is not yet known if other races are present.

Use fungicides
Scout fields for blast symptoms from the seedling through heading stages (see Scouting). If symptoms are found, prepare to use fungicides at the late boot stage and again when 80 to 90 percent of plants are headed.

Apply fungicides during the time frame predicted by the DD50 program, which is about 5 to 7 days before heading (late boot stage). Fungicides are especially needed if blast symptoms have been observed in the field and the variety is very susceptible. Fungicides should be applied a second time about two days after 50 percent heading (90 percent head exsertion). In uniform stands, 90 percent heading will occur in 4 to 5 days after the first heads are visible.

The decision to treat is more easily made when one or more of the following factors exist:

The development of this disease is difficult to predict, and fungicide treatments are expensive. Therefore, you should treat on the basis of the above factors or automatically treat the field with a fungicide if you are unwilling to risk disease damage.

Early
Rice fields should be scouted for leaf symptoms of blast beginning at the seedling stage and continuing until early heading. Leaf symptoms will appear most readily on plants at the edges of fields, on levees, in areas of the fields that are shaded in the morning, or in areas that received excessive nitrogen. Symptoms usually are worse on drought-stressed rice.

If you are uncertain about diagnosing blast symptoms, send a sample to your local MU Extension center for identification. A preboot fungicide application may be needed when foliage damage is severe and the stand is threatened. Proper fertilization and continuous flooding should minimize seedling damage.

Midseason
You should continue to scout for blast near the heading stage and watch carefully for flagleaf collar symptoms on early-planted susceptible varieties. Also, devote time to determine the stage of rice development to see if the DD50 predicted time frame for fungicide treatment for blast is correct. Symptoms appear 4 to 6 days after infection, so rice heads may be infected without symptoms appearing.

Do blast spores overwinter in Missouri?

We don’t know, but spores were found in Arkansas during the winter of 1987–88 in standing stubble. Preliminary research indicates other inoculum sources exist, including seed.

Will a cold winter destroy the overwintering blast organism?

Can my rice field get blast from infected seed?

The fungus has been isolated at low levels from seed. Seed may carry blast spores that could cause early seedling infection and symptoms.

Seed treatment in general is good insurance against seedling diseases and is likely to stop any seed transmission of blast. It will not prevent infection from wind-borne spores. Not all seed treatment fungicides are effective. Use a broad-spectrum material.

Will burning the straw from an infected field help?

Burning of stubble may reduce trash-borne spores, but the disease can still spread to your field by wind-borne spores.

Will rolling the straw soon after harvest be as effective as burning?

It could be more effective because of the difficulty in getting a thorough burn, and the crop residue can have a beneficial effect on the rotated crop. It may be more advantageous to burn when rice must follow rice.

Should I use a fungicide automatically for blast?

Fungicides are expensive and should be used when conditions warrant.

When is it too late to apply a fungicide?

Fungicides should not be used after grain is in the milk stage and panicles are turning over, or approximately 10 days after full heading.

Should I treat with a fungicide if severe blast is discovered on tillering rice?

Rather than treat tillering rice, you should fertilize with nitrogen as needed, maintain a uniform flood of 2 to 4 inches depth and scout fields closely to determine disease progress. Treatment with a fungicide may reduce the inoculum but is probably not cost effective. Head protection is likely to be more economical.

What should be done to a field that has both sheath blight and blast?