Yellow patch is a cool-season disease caused by Rhizoctonia cerealis. Yellow patch occurs on bentgrass and annual bluegrass putting greens and sometimes on higher-gut Kentucky bluegrass. Symptoms often disappear with warmer temperatures, but in some regions yellow patch on putting surfaces can be a severe and chronic problem. 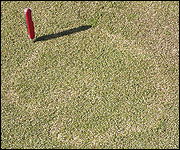 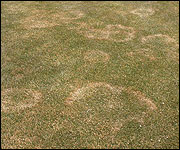 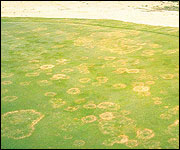 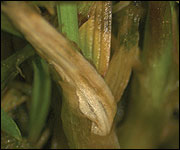 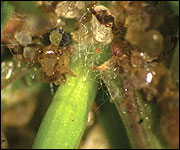 Figure 5
Mycelium of Rhizoctonia cerealis near a leaf sheath of creeping bentgrass.

Symptoms can occur from October through late April. Yellow to rusty-red rings or arclike patterns ranging in size from a few inches to several feet develop in affected turf. In many cases, only a 1- to 3-inch-wide band of discolored turf is present and the turfgrass inside the ring may show no adverse effects (Figures 1 and 2).

In other cases, turf inside the ring is discolored a light yellow, lending a more patchlike quality to the symptoms on the putting surface (Figure 3). Early stages of yellow patch are most noticeable early in the morning, then difficult to see by midday. Infected plants exhibit a light, water-soaked lesion at the base of the leaf sheaf or in the crown tissue (Figure 4). Lesions on the leaf blade are rare.

A cobwebby growth of mycelium may be visible early in the day when dew is present, but it is sparser than that seen with brown patch. It is usually necessary to use a stereo microscope to detect the mycelium (Figure 5). The hyphae exhibit right-angled branching characteristic of other Rhizoctonia species (Figure 6). Rhizoctonia cerealis is somewhat similar to, but distinct from, Rhizoctonia species that cause leaf and sheath spot, large patch of zoysiagrass and brown patch of cool-season turfgrasses. R. cerealis is binucleate (two nuclei per cell), in contrast to R. zeae and R. solani, which are multinucleate.

The fungus survives in the soil as bulbils (resting structures). Bulbils are initially light colored, then dark brown when mature. The pinhead-sized bulbils can be numerous in the thatch surrounding damaged turfgrass.

The rings are most conspicuous in the early spring, because they contrast sharply with newly emerging leaves. In most cases the symptoms remain superficial, with rings that are difficult to see. Infected plants recover quickly when temperatures increase. During prolonged cool, wet periods in late winter to early spring, patches can become necrotic and sunken. These damaged areas do not recover quickly.

Yellow patch development is favored by extended periods of wet, cloudy weather. It is a cool-temperature disease (50 to 65 degrees F). Disease development is greatly suppressed at temperatures lower than 45 degreres F and greater than 75 degrees. Yellow patch tends to be more severe on putting greens with poor subsurface drainage.

Core cultivation in the fall can help reduce disease severity by improving the infiltration rate. Although there is no direct evidence that high nitrogen rates increase disease severity, avoid excessive nitrogen fertilization in fall. Other cultural practices appear to have little influence on disease development.

Yellow patch symptoms are generally superficial and will not require a targeted fungicide application. However, on golf courses experiencing chronic problems with severe yellow patch, a preventive fungicide program may be necessary to protect putting quality. Refer to Table 5 for a list of fungicides labeled for control of yellow patch. Make the first application before the historic onset of symptoms or as soon as symptoms begin to develop. In most years, a single fall preventive application is sufficient to suppress disease development throughout the entire winter and spring. During wet, mild winters with heavy disease pressure, make a second fungicide application in late March.