Spring dead spot is a destructive disease of common bermudagrass and bermudagrass hybrids throughout the northern range of its adaptation in the United States. Three different root-rotting fungi, known as Ophiosphaerella herpotricha, O. korrae and O. narmari, are responsible for the disease. The relative frequency of the different species varies by region; O. herpotricha is found most frequently in the Midwest. Spring dead spot also infrequently occurs on buffalograss. Cool-season grasses are not susceptible to spring dead spot, but O. korrae causes necrotic ring spot of Kentucky bluegrass with patch symptoms occurring in late spring and fall. 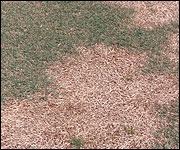 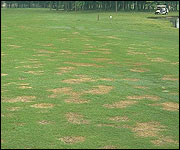 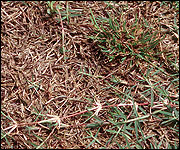 Figure 5
Recolonization of the dead areas by annual bluegrass (upper right) and bermudagrass. B. Fresenburg photo.

Spring dead spot appears as circular or arc-shaped patches of dead turf in the early spring as bermudagrass breaks winter dormancy. The dead patches are slightly depressed and straw-colored, ranging in size from several inches to several feet in diameter (Figure 1). The patches normally are randomly distributed throughout the lawn or fairway (Figure 2).

Roots and stolons of infected plants are dark brown to black and are severely rotted (Figure 3). The root rot symptoms are best observed near the margin of the dead area. Roots infected with Ophiosphaerella spp. turn dark brown to black as a result of extensive growth of the darkly pigmented fungus in and on the roots (Figure 4).

During the summer, bermudagrass slowly recolonizes the bare areas, but broadleaf weeds and other weedy grasses can also invade and colonize the bare soil, resulting in a clumpy or patchy appearance to the turf (Figure 5). By late summer there may be little or no evidence of the disease. Dead patches reappear the following spring in the same locations. Over a number of years, the patches can become quite large, coalesce, and develop arclike patterns in the turf. After seven to 10 years, disease severity may begin to decrease to the point where the disease no longer occurs.

Spring dead spot may occur on bermudagrass lawns of all ages, although it typically appears three to four years after the turf has been established.

Spring dead spot fungi colonize roots, stolons and crowns of bermudagrass plants in late summer or fall. Although most fungal colonization occurs in the fall, foliar symptoms do not develop until late spring. During winter dormancy, infected bermudagrass roots or crowns are either killed directly by the fungus or predisposed to desiccation or cold-temperature injury. Root colonization by the pathogen decreases the cold hardiness of the bermudagrass.

The disease tends to be more severe on high-maintenance bermudagrass lawns and fairways. Excessive nitrogen fertilization during the summer months enhances symptom development the following spring.

Application of 0.8 pound of potassium chloride (KCl) per 1,000 square feet at monthly intervals during the summer has also been shown to reduce spring dead spot severity.

Several fungicides, including several demethylation inhibitors (DMIs) and azoxystrobin (Heritage), are labeled for management of spring dead spot (Table 5). However, disease suppression with these fungicides has been erratic in trials. September applications of these fungicides have, in some years, reduced disease severity and enhanced recovery of the turf in the spring, but they did not completely control spring dead spot development. Therefore, fungicide applications are not currently recommended for control of spring dead spot in the Midwest, and the emphasis for managing this disease should focus on cultural methods.