Necrotic ring spot is a destructive disease of Kentucky bluegrass, but may also occur on red fescue and annual bluegrass. The disease is particularly damaging to bluegrass, because Ophiosphaerella korrae infects and kills the roots and crowns, resulting in slow recovery. The disease is also likely to occur in the same location year after year. 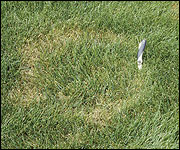 Figure 3
Symptoms of necrotic ring spot may be localized to certain areas of the turf. N. Tisserat photo. 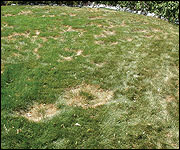 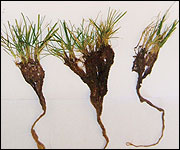 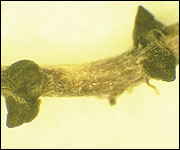 The first symptoms usually appear in early fall or late spring. Initially, light green to straw-colored patches from several inches to several feet in diameter develop in the turf (Figure 1). As the disease progresses, patches develop more of a doughnut or frogeye pattern. The ring becomes matted and craterlike, whereas the grass inside the ring remains healthy and green (Figure 2). The patches may be localized to one part of the turf area (Figure 3) or widely scattered throughout. Rings may eventually coalesce to create larger arcs of dead turf (Figure 4). Symptoms may persist throughout the growing season and increase in size and severity in successive years.

Bluegrass infected by Ophiosphaerella korrae exhibits extensive root and crown discoloration and rot (Figure 5). This can be observed by cutting a small sod piece from the lawn and carefully washing off soil and organic matter from roots. Darkly pigmented fungal hyphae may be visible on the root surface with the aid of a hand lens. The presence of large frogeye patches and root discoloration are usually diagnostic; however, necrotic ring spot can be confused with summer patch. Summer patch symptoms usually do not appear until late June or July and then symptoms tend to disappear with cooler weather in the fall. Also, frogeye patches associated with summer patch tend to be smaller than those associated with necrotic ring spot. Plant disease diagnostic labs can verify the presence of necrotic ring spot.

Small pear-shaped pseudothecia (fruiting bodies) may form on decaying roots and crowns, but this rarely occurs in the field (Figure 6 top). Darkly pigmented multicelled ascopores are produced in asci (sac-like structures) within the pseudothecia (Figure 6 bottom).

O. korrae survives from year to year on dead, colonized bluegrass roots and crowns or on the surface of living roots. The fungus actively colonizes the outside of roots at soil temperatures between 65 degrees and 80 degrees F. In the Midwest, these temperatures occur in the spring and fall, but along the Front Range of the Rockies they occur from mid-May through mid-September, with some variation on the west slope and at higher elevations. O. korrae eventually penetrates roots and colonizes the root cortex. This either debilitates or kills roots and leads to a decrease in water and nutrient uptake by the plant. Plants with extensively damaged root systems are more prone to injury or death, particularly during periods of high temperature or drought stress. Thus, symptoms often do not show up until late summer or early fall even though root colonization occurs earlier. Symptoms may persist through the winter.

Symptoms generally appear two to three years after turf establishment, although in some cases the disease may not develop for a decade or more. The disease tends to be more severe in areas established from sod and on sites with compacted soils. Excessive irrigation and fertilization may also exacerbate the severity of the disease.

Necrotic ring spot can be a difficult disease to manage, but there are several genetic, cultural, and chemical options that can help minimize damage. Several varieties of Kentucky bluegrass, including 'Adelphi', 'Apex', 'Eclipse', 'Kelly', 'Midnight', 'NuBlue', 'Nugget', 'NewStar' and 'Wabash' have moderate to good resistance to O. korrae. Consider using these when establishing a new area from seed or overseeding extensively damaged areas. Necrotic ring spot is not a problem on perennial ryegrass or tall fescue, so depending on the region, these grasses can also be used to overseed damaged areas. Mixing perennial ryegrass seed with resistant bluegrass seed (20:80 ratio based on weight) can also suppress necrotic ring spot. However, some people object to the reduced turf quality associated with this grass mixture.

Core cultivate the turf area at least once a year (spring or fall) to help reduce thatch buildup and improve soil drainage. Do not overwater. Water the lawn to a depth of 6 to 8 inches as infrequently as possible without creating moisture stress. Maintain a mowing height of 2.5 to 3 inches.

Avoid excessive amounts of nitrogen fertilizer (more than 4 pounds of nitrogen per 1,000 square feet), especially when most of this nitrogen is applied in the fall. Consider the use of slow-release formulations of nitrogen. This allows for more uniform release of nitrogen through the growing season and avoids "bursts" of growth following fertilizer application.

If necrotic ring spot develops, water the grass lightly at midday during periods of high temperatures. This will help cool the turfgrass and may prevent additional turfgrass death.

Preventive fungicide applications may be effective in suppressing necrotic ring spot. Refer to Table 5 for a list of fungicides labeled to control this disease.

Timing of fungicide applications is critical for effective disease management. Products must be applied in the spring before root colonization by the fungus occurs. Apply fungicides in May when soil temperatures reach 65 degrees F at a depth of 2 inches. Make a second application in 30 to 60 days to maximize disease control. Fungicide applications suppress disease development but do not eradicate O. korrae. Applications over several years may be necessary to manage necrotic ring spot on severely damaged turf.