Although Microdochium patch is often referred to as pink snow mold, snow cover is not required for disease development. The disease is most common on new bentgrass greens under cover or in situations where nitrogen fertility was high going into the winter. 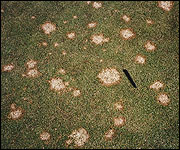 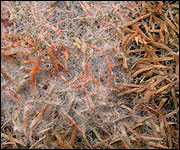 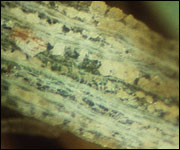 Symptoms of Microdochium patch are variable. On creeping bentgrass, the more familiar symptom is a distinct circular to irregular patch ranging in size from 1 to 8 inches in diameter (Figure 1). The patch appears red-brown and water-soaked at first, but rapidly fades to a pinkish white with a red-brown border. Microdochium patch on creeping bentgrass can also occur as a water-soaked, reddish foliar blight instead of a distinct patch. The foliar blight phase is especially common in mid to late spring. In this foliar blight phase, Microdochium nivale is readily spread by mowing. Because the symptom pattern coincides with the mowing pattern, the disease has been misdiagnosed as Pythium foliar blight because the latter is also readily spread by mowing. Pythium foliar blight, however, is a high-temperature disease. On higher cut turf such as Kentucky bluegrass, abundant mycelium (aggregate mass of vegetative growth) can often be seen in association with blighted turfgrass (Figure 2).

The pink color is due in part to the development of fruiting bodies known as sporodochia. The white to pink sporodochia are abundant on the leaf surface under cool wet conditions (Figure 3). Conidia produced on the sporodochia are crescent shaped with one or two septa (cross-walls) (Figure 4).

Spring outbreaks of Microdochium patch on putting surfaces are often mild with a few sporadic patches per green. The disease is often observed in association with yellow patch. The symptoms generally disappear with warmer temperatures.

Dense, lush growth resulting from heavy nitrogen application is especially susceptible to M. nivale. The disease is more severe on new greens, greens under cover or greens that have been repaired with overseeding and heavy fertilization to promote recovery.

In regions where the snow molds Microdochium patch and gray snow mold occur at the same time as a chronic problem, the best disease management tool is a preventive fungicide application. Refer to Table 5 for a list of fungicides labeled for control of Microdochium patch. Not all products labeled for control of Microdochium patch are efficacious against gray snow mold and vice versa. In this situation the fungicide application should contain more than one product to be certain that protection is provided against both diseases. In these regions, the preventive application should be made just before the first anticipated snowfall or just before applying winter covers.

Avoid late-season application of water-soluble nitrogen. The turfgrass should be mowed into late fall to avoid long leaf blades before the onset of winter.