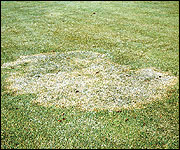 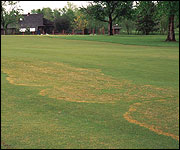 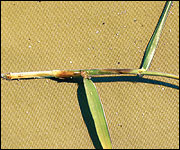 Figure 3
Lesions resulting from Rhizoctonia solani infection and yellow-orange discoloration of leaves beyond this girdled area. 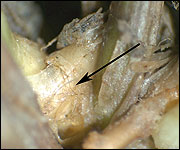 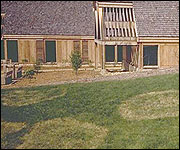 Figure 5
Symptoms of large patch on buffalograss in the spring. 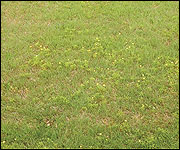 Circular, slightly matted areas of straw-yellow zoysiagrass initially develop in late September to early October during cool, rainy weather (Figure 1). During favorable weather, the fungus progressively blights more shoots, resulting in large, blighted patches of turfgrass with bright orange margins (Figure 2). Examination of individual shoots within the patch reveals reddish brown to black lesions at the base of the leaf sheaths, beyond which the leaf blades exhibit a yellow-orange color (Figure 3). The yellow-orange color is due to an accumulation of anthocyanins caused by girdling of the leaf sheath.

The yellow-orange margin is indicative of active disease, and the large, cinnamon-brown colored hyphae of Rhizoctonia solani are most easily observed in the leaf sheaths during this phase (Figure 4 top). Lesions normally do not develop on the leaves. Depending on disease severity, unaffected, living shoots may be scattered throughout the patch. Patches of blighted turf often exceed 20 feet in diameter.

Sheath infection can continue into November as long as soil temperatures remain above 50 degrees F and soil moisture is high. Patch enlargement after fall dormancy (October) may not be noticed until zoysiagrass resumes spring growth.

Patches of zoysiagrass as well as buffalograss damaged by R. solani reappear in spring as light brown, sunken areas that are slower to recover from dormancy than surrounding, healthy turfgrass (Figure 5). Leaf sheath lesions typically are not present in early spring, but sheath rotting may resume in April and May as soil and air temperatures increase. This can result in patch expansion and symptoms similar to those described for fall infection. New patches also may develop in spring. The activity of R. solani usually continues through May but is suppressed by high summer temperatures.

The fungus does not kill stolons and roots within the patch, and new shoots will form in the damaged areas with time. Because infected zoysiagrass is slow to recover, weed invasion in the thinned areas of the patch is common (Figure 6).

Large patch symptoms can occur anytime during the growing season, but they are most common in spring and fall as zoysiagrass enters or breaks winter dormancy. The disease occurs on both residential lawns and golf courses, but it is more severe when the grass is mowed to heights of less than one inch (e.g., golf course fairways) and where soil drainage is poor.

Large patch development is favored by heavy thatch. R. solani oversummers in the thatch as bulbils (resting structures). It does not produce spores, but can easily be moved from one location to another on contaminated sod.

The R. solani that infects zoysiagrass belongs to a different subgroup (AG 2-2 LP) and has a lower temperature range (50 to 86 degrees F) for infection than the brown patch fungus that damages cool-season turfgrasses. Therefore, large patch almost always occurs during relatively cool weather in spring and fall, whereas brown patch is a problem on cool-season turfgrasses in midsummer. Large patch development is favored by frequent rains and excessive soil moisture.

Avoid overwatering the turfgrass, especially in the fall or early spring. Poorly drained areas are especially susceptible to injury from large patch and should be constructed (e.g., draining tiles) to avoid soil saturation. Avoid mowing the turfgrass in early morning when the thatch is spongy or wet. The fungus may be distributed in grass clippings during mowing.

Core cultivation or verti-slicing in June or July helps reduce thatch accumulation and invigorates the turfgrass. A reduction in the thatch layer may also suppress large patch development. Do not cultivate in early spring or at other times when the disease is active. The fungus can be spread on infected turf cores removed during cultivation, and physical damage associated with this cultural practice can weaken the turfgrass and slow the recovery process.

Early spring fertilization increases the possibility of a large patch epidemic. Begin fertilization only after large patch activity has stopped. This is usually sometime in mid- to late May. Research results indicate that routine applications of slow-release forms of nitrogen in the summer (urea formaldehyde, turkey compost litter) may slightly suppress severity of large patch in the fall. Avoid using more than 2 pounds per 1,000 square feet of actual nitrogen during the growing season. If large patch is severe in the spring, application of a quick-release form of nitrogen, such as urea, in late May or early June may help speed turfgrass recovery during the early summer months. Avoid using quick-release nitrogen forms in late summer.

Curative fungicide applications are less effective in controlling large patch. Many zoysiagrass shoots are already damaged or killed by the time a curative treatment is applied. Because of the cool temperatures in spring and fall, turfgrass cannot quickly recover from the injury. Nevertheless, curative fungicide treatments may prevent expansion of existing patches.