Editor's note
Since this guide was printed and last reviewed, a section was added under the Shooting section that provides advice on how to deal with feral hogs while hunting other game.

Feral or wild hogs (Sus scrofa) have become free-ranging animals in some locations of the state, and their numbers continue to grow not only in Missouri but throughout portions of the Midwest, West Coast and southeastern United States. Because of their destructive feeding habitats and potential to spread disease (including swine brucellosis, pseudorabies, trichinosis and leptospirosis), feral hogs are considered a substantial liability to agriculture and forestry production as well as to native wildlife. This guide has been developed to increase the understanding of feral hog biology and natural history and to provide information on damage management and control techniques.

A feral hog in Missouri is basically any swine that is roaming freely on public land or private land without permission and is not conspicuously identified by ear tags or other forms of identification.

Feral hogs can include Eurasian or "Russian" wild hogs and an assortment of hybrids (Yorkshire, Hampshire, Durocs and others) that have escaped into the wild or have been released for hunting purposes. Their size and color depend on their breed and the quality of nutrition during development. Feral hogs can reach a size of 3 feet in height, 5 feet in length and more than 400 pounds in weight. However, most sows will average about 110 pounds and boars will weigh an average of 130 pounds.

Eurasian wild hogs
Pure strain Eurasian or Russian boars (referring to both sexes) differ in appearance from other types of hogs. These hogs usually have longer legs, a larger head and a longer snout. They also have four continuously growing tusks, longer hair with multiple splits at the ends of the hair shafts and a mane from the neck to the base of their straight tail. Eurasian/Russian bred piglets are reddish brown with black longitudinal stripes. As the piglets mature, the stripes disappear and their color changes to mostly black (Figure 1).

Figure 1
Feral hogs can include Eurasian wild hogs and various hybrids that have escaped, or been released, into the wild.

Hybrids
The majority of the feral hog population in Missouri consists of hybrids, which have genetic combinations that include Eurasian wild hogs along with an assortment of domestic varieties. These hybrids can look similar to domestic pigs, although most have the traditional wild boar appearance. All will have small eyes, large triangular ears and a long snout ending in a large, round nose. Most of these hogs will have longer bristles than their domestic ancestors had, but shorter hair than that of purebred Russian boars. The resulting offspring exhibit a wide variety of shapes, patterns and colors, which can include gray, black, blond, spotted, belted and many shades and variations of these colors (Figure 2).

Figure 2
Feral hogs can have solid, spotted or belted patterns in various colors, including gray, black, red and blond.

Explorers from Europe introduced hogs into the Americas during the 15th and 16th centuries. They were then introduced into Florida in 1593 and free-ranging populations spread into the southeast United States as well as other locations across the country during the next few hundred years.

In Missouri, feral hogs have been roaming the countryside in the southern part of the state since the days of open range. These populations were isolated and kept in check by area farmers and local hunting efforts.

Populations began to increase and spread throughout a wider range during the 1990s, when recreational hog hunting began to gain popularity. Some individuals started raising European wild boars as a form of alternative agriculture and for hunting on licensed shooting areas. It was not long before some of these hogs escaped or were intentionally released on public and private lands.

Feral hog populations are now established in more than 20 southern Missouri counties, and sightings of feral hogs occur across the state (Figure 3). In general, feral hog numbers are relatively small and thinly scattered across the state. However, larger populations can be found on public and private lands in the Ozark and west-central regions. 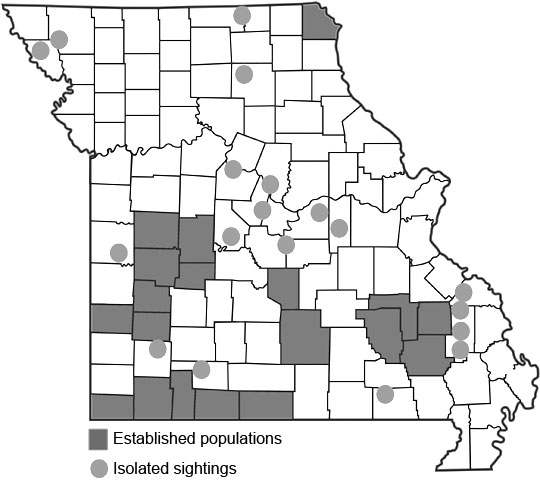 Figure 3
Feral hogs have been sighted across Missouri and have become established mainly in southern counties.

Feral hogs have the capacity to breed at any time of the year when abundant food supplies are available. Sows can begin breeding at six months of age and can potentially produce up to two litters of four to 10 piglets every 12 to 15 months. With this high breeding potential, the population can double in about four months. Feral hogs are also very social animals and tend to travel in family groups consisting of several sows and their offspring. Weaned pigs usually stay with their mother until another litter is born or until they mate. Adult boars are usually solitary, joining the group only to mate or to use a food source.

The home range for feral hogs varies in size and usually depends on the availability of food, water and cover. Where food is abundant, hogs occupy a smaller area than where food is scarce. Feral hogs, particularly boars, have been known to have a home range of more than 15 square miles when food is limited. A sow's home range is much smaller and may cover 2 to 5 square miles, depending on habitat quality.

Feral hogs are highly adaptable. They can use nearly every type of habitat, but they prefer moist bottomland forests and areas around streams and creeks where mud for wallowing and foods such as acorns are plentiful. These brushy areas provide the dense vegetation that feral hogs need for cover. During the summer months, feral hogs are most active at night. During the cooler seasons, they will be most active in early morning or late afternoon.

Feral hogs are omnivorous, which means they will eat almost anything from grain to carrion. The largest portion of their diet includes vegetable matter — and when available acorns are a preferred food item. The have a strong sense of smell, which they use to locate food items. They will consume roots, eggs of ground-nesting birds, and invertebrates such as centipedes, leeches, earthworms and crayfish. In agricultural areas, they will consume cultivated crops. Wild hogs will also prey on young native wildlife, livestock and other small vertebrates.

A large percentage of piglets will die within the first three months of age. However, feral hogs live four to five years on average and have been known to live up to eight years. Mortality factors include disease, hunting, and predation from coyotes, bobcats and feral dogs. Adult feral hogs have no natural predators in Missouri.

On wildlife and plant communities

Feral hogs can root around and literally plow up soil to depths of 2 to 8 inches searching for favorite food items. A group of hogs can damage several acres in a short period of time. Because hogs do not sweat, they typically will cool themselves in "hog wallows," muddy areas near seeps, springs, ponds and streams. Here they will leave their tracks and the imprint of their coarse hair in the mud. After wallowing, they will rub on trees, leaving mud and hair on the bark.

The scat of a feral hog looks like the pellets of deer feces; however, the pellets are larger and more variable in shape and content. Hog scat can contain grain, acorns, and the hair or feathers of whatever they have eaten.

Tracks of feral hogs are similar to those of deer – but with rounded toes. Hog tracks are also wider than they are long (Figure 4).

Figure 4
Feral hog (B) and European wild boar (C) tracks are similar to deer tracks (A).

The presence of feral hogs, along with their rooting and feeding behavior, can cause severe damage not only to native wildlife and plant communities but also to agriculture (Figure 5). 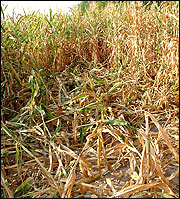 Figure 5
Feral hogs can cause damage to fields and crops by their rooting and feeding behavior.

Feral hogs can be controlled by a variety of techniques, including trapping and shooting. There are currently no toxicants or repellents registered for the control of hogs.

Trapping
Trapping is the most common and effective method for catching hogs. By using corral-type traps with a one-way door, multiple hogs can be caught at one time. Many cage trap designs have been used successfully. However, research at Texas A&M University has shown that to catch the most hogs at one time, larger traps are more effective than smaller box traps, which can only hold a few hogs and may be avoided altogether by "trap-wise" hogs (Figure 6).

Additional information on trapping feral hogs can be obtained from the Missouri Department of Conservation and from the resources provided in this publication. A fact sheet developed by Texas A&M is available online at feralhogs.tamu.edu/trap.cfm. 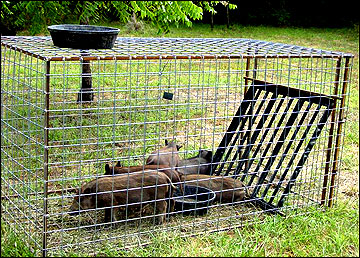 Figure 6
Feral hogs can be caught in cage traps with one-way doors.

Shooting
If you encounter a feral hog while hunting deer or other game, shoot it on sight. Feral hogs may be taken in any number throughout the year.

However, hunting is not recommended for controlling feral hog populations. Hunting often results in scattering individual animals and prevents other control measures, such as trapping, from being effective.

Instead of hunting hogs to help reduce their numbers, individuals and hunters should report feral hog sightings to their local Missouri Department of Conservation agent. They can best determine how to capture and kill entire groups of feral hogs that are in the area.

Feral hogs cause a wide variety of problems and can be a serious concern for private landowners as well as fish and wildlife managers. They are destructive to sensitive natural areas such as glades, fens and springs. Their tendency to wallow in wet areas can destroy these important habitats. The rooting and feeding behavior of feral hogs also contributes to soil erosion and reduces water quality.

In addition, feral hogs can cause significant damage to agriculture, including row crops and pastures. However, one of the biggest threats to agriculture is the potential transfer of disease from infected feral hogs to domestic swine herds. Feral hogs in other states are known to carry swine brucellosis and pseudorabies. Both of these diseases cause abortions in sows and high mortality in piglets.

Missouri's domestic swine are considered free of the above diseases and are a good source of safe, healthy pork products. However, an outbreak of swine brucellosis or pseudorabies from feral hogs into domestic swine could cripple Missouri's pork industry, creating a negative economic impact that would affect the entire state.

Many public agencies, including the Missouri Departments of Conservation and Natural Resources, the U.S. Forest Service, and the U.S. Army Corps of Engineers, are actively eradicating feral hogs on their respective public properties as well as on the properties of adjoining landowners. The U.S. Department of Agriculture/Animal and Plant Health Inspection Service – Wildlife Services, also assists private landowners to eradicate hogs.

Report the illegal release of feral hogs to the Missouri Department of Conservation's Operation Game Thief Hotline at 800-392-1111. You may remain anonymous and a reward is possible.

More information on the Web