Leaf scorch is a noninfectious condition caused by an unfavorable environment. There is no chemical control for leaf scorch, so the most effective defense is good management.

Scorch is often called a disease, but it is not caused by fungus, bacteria or virus, nor does it result from insect attack. However, these problems may add to the seriousness of scorch.

Japanese red maples are more likely to scorch than other small trees, but dogwoods growing in full sunlight may develop the problem even though other growing conditions appear good.

Broad-leaved evergreens may show scorch, and the problem may develop on them in winter as well as in summer. Plants of this type most likely to scorch are southern magnolia, rhododendron, azalea, laurel and Japanese andromeda.

Narrow-leaved evergreens are also susceptible, and those most frequently affected are pine, hemlock and spruce.

Leaf scorch is most often restricted entirely to marginal areas and tips. Symptoms commonly appear as yellowing between veins or along margins (Figure 1). In general, the yellowing becomes increasingly severe and tissue dies and turns brown at leaf margins and between veins (Figure 2). This is the stage at which injury becomes easily noticeable. However, plants can differ in pattern of scorch development. Often, dead tissue appears without any previous yellowing.

Symptoms usually appear after drying winds in conjunction with periods of hot, dry weather. Scorch may also suddenly appear when long periods of wet, cloudy weather are followed abruptly by windy and sunny weather. Symptoms may appear on only one branch or one side of the tree, or may be spread over the entire tree. Usually, the side of the tree exposed to damage, wind, sun or other unfavorable conditions will show injury first. 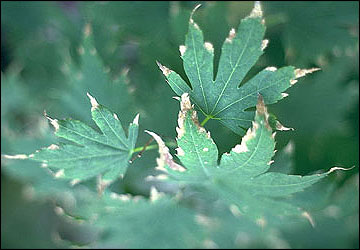 Figure 1
A Japanese maple shows the first signs of leaf scorch — death of the tips of the leaf lobes. 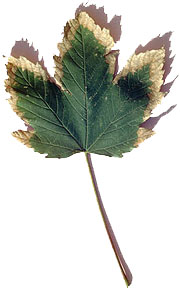 Figure 2
Leaf scorch may begin as yellowing, then browning, then expansion of the damaged area. In some plants it will continue to move between the veins of the leaves

Scorch usually is a warning that some condition has occurred or is occurring that is adversely influencing the plant. In some cases, scorch is simply an indication that a particular tree is unsuited to the local climate or has been given unsuitable exposure.

When water is lost from leaves faster than it can be replaced, the resulting condition appears as leaf scorch. Veins supply nearly all the water that reaches leaves, and leaf margins and interveinal areas cannot get water as rapidly as areas next to the main veins. Thus, marginal areas dry up while tissues adjacent to veins remain alive.

Many conditions may lead to reduction of water in leaves, including hot, drying winds; temperatures above 90 degrees; windy and hot weather following a long period of wet and cloudy weather; drought conditions and low humidity; or drying winter winds when soil water is frozen.

Conditions causing rapid loss of water in leaves do not always produce leaf scorch. Usually, these conditions must be coupled with other unfavorable growing conditions that might prevent rapid uptake and reduce flow of water to leaves — the most common cause of which is drought.

Less obvious conditions that could cause scorch include shallow soils that overlie rocks or a hardpan; poor, heavy soils or soils that do not retain water well; defective root systems caused by machinery damage or recent transplant; or layers of asphalt or concrete over root systems, which tend to keep soil dry and may cause heat buildup.

Poor drainage may also kill a portion of the root system and eventually lead to leaf scorch. Leaf scorch itself does not kill a tree but can weaken it.

In some instances, leaf scorch can be attributed to an insect, fungal or bacterial problem. Any insects or diseases affecting roots can create an imbalance of water between the tops and the roots. Wilt diseases such as oak wilt, verticillium wilt or pine wilt reside in the water-conducting cells in the plant. Such diseases cause a physical impairment of the xylem. This results in the diminished uptake of water and thus leads to leaf scorch. (For more information on wilt diseases, see MU Extension publication MX858, Pine Wilt: A Fatal Disease of Exotic Pines in the Midwest.) Bacterial leaf scorch is a disease of certain tree species in which bacteria develop in xylem cells. Before attributing leaf scorch to environmental or site factors, it is important to rule out these biotic causes of leaf scorch.

When leaf scorch is noticed, the tissue has usually dried past the point of recovery, but several steps can be taken to prevent more severe damage and improve the condition in subsequent years. Thorough, deep watering will usually help increase water uptake.

Test the soil around scorched plants to rule out a mineral imbalance as the cause. Spring application of a complete fertilizer high in potash and containing minor elements may reduce the problem if soil testing indicates the soil is low in potash. Do not fertilize after June, however, because some plants will then develop young, soft growth that will scorch easily in hot August winds. Also, avoid fertilizing with excessive nitrogen.

If the root system of a tree has been injured by grading or is suppressed by concrete, improve its condition by pruning the top to balance the reduced root system. Often, the tree also can be shaped to enhance its appearance in addition to improving the leaf scorch problem. Be sure to water root-damaged trees during drought conditions.

Conserve soil moisture by mulching trees and shrubs with rotted leaves, bark or other material. If watering is necessary, be sure to water thoroughly because mulches absorb water from the surface. Light waterings will do no more than wet the mulch.

Use screens to protect trees or plants not suited to the climate or location. Burlap screens for wind and lath shades for sun can provide protection.

Practices that improve growing conditions usually help prevent leaf scorch. Select plants suited to the region, and give them the most suitable exposure.

Minimize injury during transplantation, grading or any other operation that involves the plant’s root system. If the root system has been injured recently, you might expect some scorch until the plant has repaired the damage by producing new roots.