Thatch is a layer of living and dead roots, crowns and lower shoots that often develops in lawns (Figure 1). It can weaken and even destroy a lawn if not prevented or removed. 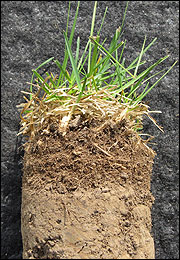 Figure 1
Thatch is a distinct layer of organic matter consisting of living and dead roots, crowns and lower shoots.

Grass clippings from mowing do not contribute to thatch. However, once a thatch layer has developed, clippings may speed its formation.

Thatch buildup varies among lawns. Moderate to aggressively spreading species such as Kentucky bluegrass, zoysiagrass and bermudagrass have greater potential for thatch buildup than turf-type tall fescue and perennial ryegrass. Some lawns never develop a thatch layer, and others become thatch-bound within a few years after being established. The best lawn grasses are those that constantly reproduce new plants to renew the lawn. As old plants age and die, they decompose into fine-textured humus that becomes a part of the surface soil.

Once thatch starts to form, conditions develop that often result in even more thatch. Accumulated thatch:

These factors contribute to early death of grass plants. Thus, thatch is both a result of unfavorable conditions and a cause of further damaging influences.

Thatch development may go unnoticed in early stages, especially in bluegrass lawns. Lawns with a thick thatch layer may appear healthy in spring, then suddenly die in large patches during summer heat and drought.

As thatch builds up, the roots of new grass plants grow within the thatch layer rather than in the soil. When the lawn is exposed to hot, dry summer weather, the plants are unable to survive.

Thatch may develop over several years before noticeable damage occurs. Good cultural practices, starting when the lawn is new, may not prevent thatch indefinitely but can slow its formation.

Always read and follow directions on the pesticide label. The University of Missouri intends neither endorsement of products named in this guide nor criticism of similar products that are not mentioned.

Examine the lawn closely regardless of how healthy it appears. Cut several plugs 2 to 3 inches deep. Lift the plugs and examine their profiles. If thatch is present, it will appear as a distinct horizontal layer of brown spongy or feltlike material (Figure 1).

When about 1/2 inch of thatch develops in bluegrass, remove it before the grass is damaged. Thatch is best removed by power raking, verticutting or coring with a machine that may be hired or rented. Coring causes less lawn stress than dethatching with a power rake or vertical mower and provides the additional benefit of reducing soil compaction.

Lawns should be dethatched only when conditions favor rapid turfgrass recovery. For cool-season lawns, early fall dethatching is most desirable. Mid-June is preferred for zoysiagrass and bermudagrass, but only when lawns are actively growing. Weak zoysia lawns with heavy thatch (1 inch or more) may not fully recover in one year from intense mechanical dethatching. Intensive coring causes much less damage to existing turfgrass than power raking or verticutting.

Preemergence herbicides containing dithiopyr, pendimethalin or prodiamine may also inhibit recovery of zoysiagrass and bermudagrass after severe dethatching. When severe dethatching is required, avoid using those preemergence herbicides. Instead, use an application of Drive (quinclorac) postemergent herbicide if crabgrass becomes a problem in recovering stands of zoysiagrass or bermudagrass.

Most varieties of zoysiagrass and bermudagrass are quite vigorous, producing large quantities of stolons, rhizomes and foliage that are fairly resistant to decay. Thus, both have a strong tendency to develop thatch. Annual power raking with dethatching equipment will remove some thatch and improve the vigor of the grass. Aeration is also beneficial, alone or combined with power raking.

In severe situations, removal of thatch by mechanical means also removes some of the living grass tissue. In such cases, moderate maintenance over two to three years may be more desirable than attempting complete removal in a single operation.

Necessary lawn improvement practices should be done after dethatching or aerifying. Such operations may be done on the same day and may include top-dressing, reseeding, fertilizing, liming and watering