Bulbs made to flower at other than normal times are said to be forced. The practice of forcing is commonly used to flower daffodils, hyacinths, tulips, crocus and other spring bulbs during the winter (Figure 1). With proper planning and care, bulbs can supply color for the home from late November until early April, when they begin to flower normally outdoors. 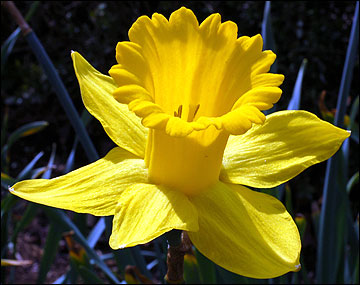 Figure 1
Daffodils are relatively easy to force and can bring the beauty of spring indoors in winter.

Steps for forcing include selecting the most suitable varieties, potting bulbs properly in well-drained potting medium, providing proper cold-temperature treatment, bringing bulbs into a cool room, and placing the plants in a display location when well-developed.

Any spring-flowering bulb can be forced, but to be successful, select types and varieties known to force well. Hyacinths and daffodils are generally the easiest to force. Tulips are slightly more difficult, but with proper treatments they can be forced successfully. Many small bulbs such as crocus, grape hyacinth and snowdrops also may be forced.

The general procedure for forcing all these bulbs is similar. Begin by buying only top-quality, flowering-size bulbs for indoor forcing. Good bulbs contain food reserves necessary for successfully producing roots, leaves and flowers.

Hyacinths
Hyacinths are usually the most easily forced spring bulbs. They may be forced in water or potted in a container. Potting should be done in late September or early October. Plants will flower about one month after being brought indoors from the chilling treatment. Earliest bloom from bulbs can be expected about mid-January.

Specially prepared, or pre-chilled, bulbs are available for forcing into bloom by Christmas. Specific directions are supplied with these bulbs if they are prepared for early forcing.

Table 1 lists hyacinth varieties most suitable for forcing, along with the appropriate potting and forcing dates.

Daffodils (Narcissus)
Many varieties of daffodils can be forced; Table 2 lists some of the more popular ones. Paperwhite Narcissus are suitable for earliest forcing either in pots or in water.

Tulips
Table 3 suggests tulip varieties suitable for forcing, but many others may be used.

Table 1 lists hyacinth varieties most suitable for forcing along with the appropriate potting and forcing dates.

Materials
The following materials will be needed for potting bulbs:

Procedure
All bulbs are normally potted in October. 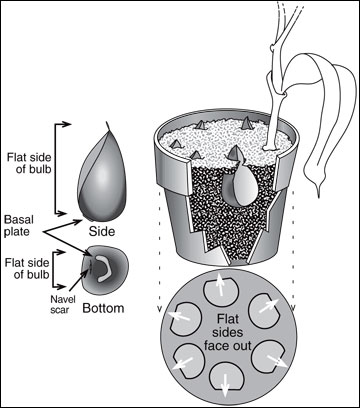 Figure 2
When potting tulip bulbs, place the flat side of the bulb toward the outside of the pot.

An unheated basement or storage cellar is most convenient because temperatures don’t fluctuate greatly and the cooling is quicker and more satisfactory. An old refrigerator may be used for a few bulbs.

A cold frame is easily built outdoors and may later be used for other gardening activities. Place the pots to be forced in the cold frame and cover them with sawdust, straw, leaves, peat moss, shredded styrofoam or other material. The cold frame should be in a shady place or on the north side of a building so the soil is as uniformly cool as possible in October and November. No sash is needed on the cold frame. For more information on cold frames, see MU Extension publication G6965, Building and Using Hotbeds and Cold Frames.

When preparing only a few pots, place them on the surface of the ground close to a building. Cover them with peat moss, leaves, straw or similar material and invert a box or bushel basket over them for protection.

Bulbs stored outdoors will normally get sufficient moisture from the soil around them after initial watering. Indoors, bulbs should be kept moist at all times. Overwatering, however, may cause bulb rot.

Roots should develop soon after potting. Excellent root growth is essential to good growth and flower formation. Potted bulbs should be placed outdoors at least three weeks before the first hard freeze is expected. This is an important period for good root development.

A few varieties may be brought indoors after about 12 weeks of cooling, but most will require 13 or 14 weeks to develop the necessary roots and top growth. Indoor forcing takes three to four weeks. To extend the bloom period, remove potted bulbs from storage at weekly intervals.

If potting medium and tops are frozen when plants are brought indoors, place plants in a cool room (about 40 degrees F) for two or three days to thaw out slowly. Don’t touch the plant tops when they are frozen.

If plants are not frozen, bring them directly to a cool, bright window where temperatures range close to 60 degrees F. Don’t place them in direct sunlight. Keep bulbs watered, but fertilizer won’t be needed.

When flower buds are almost fully developed, pots may be moved to the area in the house where they are to be displayed. Avoid placing them in full sunlight or close to a heater. The life of the flowers can be lengthened by placing the plants in a cool room at night.

Bulbs that have been forced indoors are usually of little value for outdoor planting and should be discarded.

Tender types of Narcissus such as Paperwhite and Soleil d’Or don’t require cold treatment before being forced into bloom. These are the most popular and dependable bulbs for forcing and may be grown in water with pebbles for support.

Hyacinths can be forced into bloom in containers that will support the bulb with only its base touching the water. Bulbs should be cleaned before placing them in glasses. The best time for starting the bulbs is in October.

Keep the glasses containing the bulbs in a cool (45 to 50 degrees F), dark location until tip growth is 3 to 4 inches long and the flower cluster emerges free from the bulb. This may take 8 to 12 weeks. When the top growth is well-developed, move the glasses to a cool, bright window.