The peach has often been called the Queen of Fruits. Its beauty is surpassed only by its delightful flavor and texture. Peach trees require considerable care, however, and cultivars should be carefully selected.

Nectarines are basically fuzzless peaches and are treated the same as peaches. However, they are more challenging to grow than peaches. Most nectarines have only moderate to poor resistance to bacterial spot, and nectarine trees are not as cold hardy as peach trees.

How many trees to plant

Planting more trees than can be cared for or are needed results in wasted and rotten fruit. Often, one peach or nectarine tree is enough for a family. A mature tree will produce an average of three bushels, or 120 to 150 pounds, of fruit. 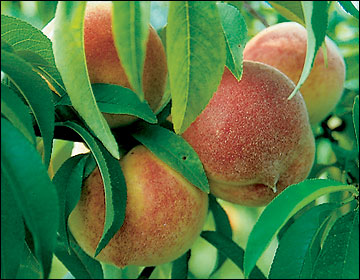 1The numbers listed under season are days before (-) or days after (+) the first Redhaven harvest. The first picking date for Redhaven is typically July 15 in central Missouri.

2Bacterial leaf spot is a commonly occurring disease in Missouri. It is a disease that can best be avoided by cultivar selection. Chemical sprays are only moderately effective against this disease. Peach cultivars such as Bounty, Cresthaven, Gala, and Jerseyqueen have fair resistance to bacterial spot. Elberta, Fayette, Flavorcrest, Halehaven, Laurol, Spring Flame, and Suncrest have poor resistance to this disease.

Fruit shape
In addition to standard peach fruit shapes, other types are available. Peento peaches are various colors and are flat or donut-shaped. In some peento cultivars, the pit is on the outside and can be pushed out of the peach without cutting, leaving a ring of fruit.

Flesh types
Peach cultivars are described by color: white or yellow, and by flesh: melting or nonmelting. Cultivars with melting flesh soften with maturity and may have ragged edges when sliced.

Nonmelting peaches are clingstone, have yellow flesh without red coloration near the pit, remain firm after harvest and are generally used for canning.

Cultivar descriptions may also include low-browning types that do not discolor quickly after being cut.

Hardiness
Many areas of Missouri are marginally adapted for peaches and nectarines because of low winter temperatures (below -10 degrees F) and frequent spring frosts. In northern and central areas of the state, plant only the hardiest cultivars. Do not plant peach trees in low-lying areas such as valleys, which tend to be colder than elevated sites on frosty nights. Table 1 lists some hardy peach and nectarine cultivars.

Use of dwarfing rootstocks

In general, dwarfing rootstocks should not be used, as they tend to lack adequate winter hardiness in Missouri. Use trees on standard rootstocks or naturally dwarfing cultivars to facilitate pruning, spraying and harvesting.

Peaches and nectarines tolerate a wide variety of soils, from sandy loams to clay loams, that are of adequate depth (2 to 3 feet or more) and well-drained. Peach trees are very sensitive to wet “feet.” Avoid planting peaches in low wet spots, water drainage areas or heavy clay soils. Where these areas or soils cannot be avoided, plants trees on a berm (mound) or make raised beds. Ideal soil pH is 6 to 6.5.

Plant trees as soon as the ground can be worked and before new growth is produced from buds. Ideal planting time ranges from late March to April 15. Do not allow roots of bare root trees to dry out in packaging before planting.

Dig a hole about 2 feet wider than the spread of the tree roots and deep enough to contain the roots (usually at least 18 inches deep). Plant the tree the same depth as it was in the nursery.

Before placing the tree in the hole, check the tree’s roots. Remove broken roots, trim crossed roots and shorten long roots to 12 to 18 inches.

Place the tree in the hole and spread out the roots. Roots should not be cramped. Make the hole larger if necessary. Do not put fertilizer in the hole.

Next, fill the hole with good, rich topsoil. To avoid air pockets, tamp the soil with your feet as the hole is filled. When the hole has been filled within several inches of the top and the soil firmly tamped around the roots, pour in 1 to 2 gallons of water to help settle the soil around the roots. Wait an hour or so for the water to soak in, then fill the hole to several inches above the ground level with the same good, rich topsoil, but do not tamp. The graft union should be about 2 inches above the soil surface.

The trees need to be trained and pruned to an open-center form (Figure 2). Trees trained to this form do not have a dominant central leader. Instead, an open vase tree will have three to four main branches with wide branch angles evenly spaced around the trunk. This training system allows light penetration within the trees, which is necessary for development of fruit buds and production of large, highly-colored peaches and nectarines.

Figure 2
Peach trees at planting, in June and after the first dormant pruning.

Establishing an open vase tree form
If the tree has three or four scaffold branches evenly spaced around the trunk, remove all other branches and shorten the main trunk (central leader) to 28 inches from the ground.

If the tree is unbranched, cut the leader back to 28 inches from the ground.

First summer (June)
Select three or four wide-angled branches 24 to 30 inches above the ground, evenly spaced around the trunk and near the same height on the trunk. The selected branches will form the main scaffold limbs of the tree. Remove all other branches. Shorten the main trunk to just above the scaffold branches.

After one year
In early spring before growth begins, cut back the scaffold limbs to an outward-growing bud or branch, removing about one-third to one-half of the previous year’s growth. Also, shorten lateral branches arising from the scaffolds. Remove any shoots that formed on the trunk below the main scaffold branches or that grew toward the center of the tree.

Pruning next five years
The framework (trunk and main scaffolds) is now established. Each spring, shorten branches arising from the scaffolds. Shorten branches that tend to grow more rapidly than others. Keep the center of the tree open, and remove dead or diseased wood. Unlike apple trees, peach trees bear fruit on 1-year-old wood, so new growth must be encouraged each year.

Mature trees
Keep the tree low and manageable by cutting back all branches that exceed 7 to 8 feet in height. Cut to an outward-growing branch. Remove all vigorous, upright branches arising on the trunk and main scaffolds. Thin out 10 to 20 percent of the 1-year-old fruiting wood each year.

About one month after planting, apply 1/2 cup of a 12-12-12 fertilizer (or similar analysis) in a circular pattern about 6 inches from the trunk. After the first year, a good general recommendation for fertilizing peach trees is to use 1 pound of a 12-12-12 fertilizer (or similar analysis) per year of tree age. Apply in early spring before growth begins.

After the trees come into normal bearing, use up to 5 pounds of 12-12-12 per tree. The amount to use depends on the type of soil, amount of pruning, cropping load, and fertilization of the surrounding area, such as lawns. Use the maximum amount if new growth (last year’s terminal growth) averages less than 6 inches. If last year’s terminal growth exceeds 18 inches on average, don’t use additional fertilizer until the next year. Apply fertilizer by broadcasting in a circular pattern under the drip line of the outer branches.

With rare exceptions, peach cultivars are self-pollinating.  Thus, more than one cultivar is not required for fruit production.

Most peach cultivars set too many fruit. Only 10 percent of the flowers are needed to set fruit for the tree to have a full crop load. Although some natural thinning occurs, extra hand-thinning is necessary. Failure to hand-thin properly will result in very small fruit at harvest and broken tree limbs.

Thin small, developing fruit in May just after the danger of frost has passed. Remove all deformed, damaged or diseased fruit. Thin remaining fruit to about 8 inches apart. This amount of thinning may seem drastic, but it will ensure large peaches at harvest.

On young trees, fruit can be removed by hand. As the trees become larger, use flexible wooden rods, about 1/2 inch in diameter and 5 to 6 feet long with the top 18 inches covered with a rubber hose, to hit branches gently but firmly to knock off excess fruit.

Life span of a peach tree

Peach trees rarely survive more than 10 to 12 years in Missouri because of their susceptibility to low winter temperatures, diseases and pests. Their productivity and longevity can be prolonged, however, with proper fertilizing, pruning and irrigating.

Peach trees should be watered during dry periods in the summer. The period of final swell, the last few weeks before harvest, is a critical time for irrigation. If water is limited during this time, fruit size will be reduced. Generally, little irrigation is needed after October.

Brown rot is a serious peach disease. It can attack the blossoms and the developing or ripening fruit and can even form cankers on small twigs. It must be prevented to ensure harvest of sound, good-quality fruit.

Peach leaf curl, another troublesome disease, curls and deforms the leaves early in the season (Figure 3). It must be prevented by applying a fungicide, not oil, in the dormant period.

Bacterial spot infects leaves, twigs and fruit. As lesions on the foliage enlarge, their centers abscise, leaving a shot-hole appearance. Lesions on the fruit often crack and exude gum. To avoid this disease, plant a bacterial spot–resistant peach cultivar. By the time the symptoms of this disease are apparent on susceptible cultivars, it is generally too late to control the disease on that year’s crop. However, preventive sprays with a product containing copper may be applied, starting at bud swell in the spring to protect the next crop. Copper can cause injury to peach leaves. Thus, it is important to read and follow label instructions to avoid foliar injury when applying copper products.

Several insect pests can be destructive to peach trees. The oriental fruit moth causes wormy peaches and die-back of young growing tips. The plum curculio lays its eggs in crescent-shaped cuts on the young fruit, resulting in larvae-infested peaches or fruit drop. Catfacing insects (tarnished plant bug and stink bug) feed on developing fruit, causing blemished or misshapen fruit. Borers attack the base of the trunk and the crotches of the main scaffold branches. 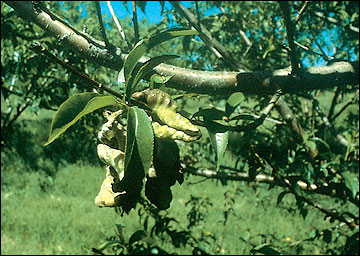 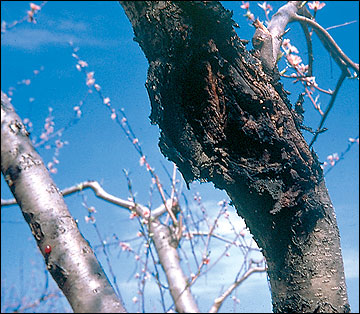