Disease infection is a major limitation to growing apples in Missouri. Several cultivars with apple scab immunity or resistance are currently available for planting. Although these cultivars can reduce pesticide usage, apples are susceptible to other diseases and insect pests. All cultivars listed below are immune or resistant to apple scab. When temperatures are near 100 degrees F in August during the daytime and are very warm at night, the flesh of early-ripening cultivars often softens and results in poor fruit quality. Thus, apple cultivars that would be harvested at this time are not recommended for planting in Missouri. Also, some cultivars listed below have not yet been evaluated in Missouri and may have unidentified limitations to fruit production. 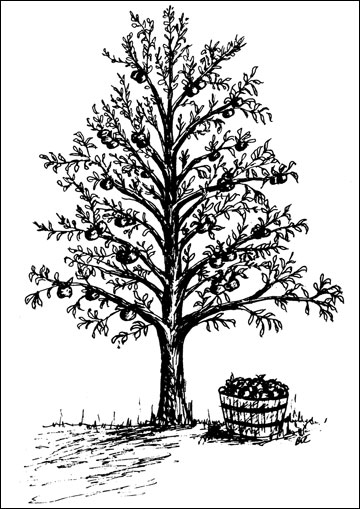 Figure 1. Planting apple cultivars that are resistant to prevalent diseases may eliminate the need to apply fungicides. (Sketch by Barbara Barkwell Long)

Although some apple cultivars have resistance to apple scab, cedar apple rust, fire blight and powdery mildew, they are still susceptible to summer diseases, such as rots, fly speck and sooty blotch, and to insect pests. Black rot symptoms appear as “frogeye” leaf spots with small light brown lesions surrounded by a dark brown border. Black rot infection on the fruit is a firm dark decay, often present at the calyx-ends of fruit. White rot infections cause soft egg-shaped lesions, which can coalesce to encompass much of the fruit. Bitter rot  causes decay in the flesh and appears in a v-shaped pattern, progressing to the core when a fruit is cut in half. Fly speck and sooty blotch occur together on the fruit surface under warm, humid weather conditions. Fly speck is identified by distinct groups of tiny, shiny black spots. Sooty blotch appears as olive green to black smudges. Both of these diseases are superficial blemishes that can usually be removed from the surface of the apple with mild scrubbing. In contrast to the summer diseases, control of insect pests on disease-resistant apple cultivars may require trapping, mating disruption or insecticide application.

Most of these scab-resistant cultivars are available from nurseries on dwarfing to semi-dwarfing rootstocks. All rootstocks designated with “G” are resistant to fire blight, including G.11, G.16, G.41, G.210, G.935, etc. M.26 rootstock is very susceptible to fire blight and, therefore, is not recommended for planting in Missouri.