Eastern gamagrass (Tripsacum dactyloides) is a warm-season bunch grass native to the eastern United States and is still often found east of Kansas and Oklahoma. This highly productive grass is best adapted to wet habitats; and remnant colonies are commonly found in flood plains and along stream banks. Eastern gamagrass is a relative of field corn (Zea mays) and is characterized by numerous short, well-developed rhizomes. Lower culm internodes are short, resulting in most of the leaves originating from the base of the plant. Individual grass clumps can reach a diameter of 4 feet with seed heads growing on culms 3 to 9 feet tall (Figure 1).

Although found extensively throughout the eastern United States at one time, eastern gamagrass is rarely found now in large natural stands. Tradition has it that eastern gamagrass was regarded as a high-quality forage crop by early settlers, but native stands were destroyed to produce grain crops or grazed out by livestock. The native animals (buffalo and elk) that used this grass before European settlement were herd animals that grazed and then moved to fresh grass, not returning to an area they had grazed until plants had an opportunity to regrow. This rest period is critical to the survival of bunch grasses because they rely on carbohydrates stored in the leaf bases for regrowth. If animals are allowed to graze regrowth before carbohydrates can be stored, plants will soon succumb to overgrazing. The loss of natural stands of this highly palatable, productive grass has been attributed to overgrazing.

Eastern gamagrass produces the majority of its growth from mid-April through mid-September. Eastern gamagrass begins growing earlier in the spring than do the other native grasses such as big bluestem (Andropogon gerardi) or switchgrass (Panicum virgatum). The distribution of eastern gamagrass yield throughout the summer makes this grass an excellent source of forage during the period of the year when cool-season grasses are relatively dormant (Figure 2). 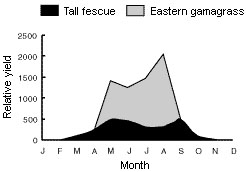 Figure 2
Eastern gamagrass is an excellent source of forage during summer months when cool-season grasses, such as tall fescue, are relatively dormant.

One of the major problems associated with eastern gamagrass is difficulty with establishment and poor seed production resulting in high seed cost. Recent developments in breeding eastern gamagrass varieties with higher yields of good-quality seed have resulted in improved seed availability and lower prices. Three cultivars of this type are available commercially, 'Pete', 'PMK-24' and 'IUKA'.

Eastern gamagrass exhibits seed dormancy that is overcome by prolonged chilling. Stratification, or wet-chilling of seed at 35 degrees Fahrenheit for 10 weeks before planting, improves germination dramatically. The two most commonly used seeding techniques at present are:

Both stratified and dormant seed are readily available through commercial seed sources.

Stratified seed is particularly susceptible to desiccation after planting. The success of planting dormant seed during the winter requires that adequate cold temperatures occur to break dormancy before favorable germination conditions occur. The uncertainty associated with these techniques due to variable environmental conditions, coupled with the problems often encountered in handling wet, stratified seed, makes some growers reluctant to plant eastern gamagrass. Recent laboratory studies have shown that pretreating eastern gamagrass seed with 30 percent hydrogen peroxide for 1 to 2 hours breaks dormancy and surface sterilizes seed. Germinable seed can then be handled dry. Commercialization of this technique could make eastern gamagrass easier to establish.

Eastern gamagrass should be planted in a prepared seedbed in 30-inch rows at 10 pounds of pure live seed per acre using a corn planter. Establishment of one plant per square yard is considered an acceptable stand since individual plant crowns can be 4 feet in diameter. Some evidence suggests that drilling seed at closer row spacings (7 to 15 inches) will result in quicker ground cover, which aids in weed control.

Annual grasses can cause problems in the establishment year. Establishment is the most critical period for weed control. Few herbicides are labeled for eastern gamagrass, although several are in development.

Following the establishment year, eastern gamagrass will compete effectively with weeds without any weed control other than proper grazing management or spring burning. Burning is typically used as a means of weed control and as a method to reduce thatch buildup when forage use is insufficient.

Eastern gamagrass yields of more than 6.5 tons of dry matter per acre have been measured in Missouri. This highly productive, nutritious grass can be grazed, harvested for hay or put up as silage. As with all other grasses, the quality of eastern gamagrass forage declines as plants mature. Elongation of the stem into the upper part of the canopy increases the amount of fiber present in the grazing zone, although eastern gamagrass maintains a higher proportion of leaf high in the canopy above the stem bases than other warm-season grasses. The quality of eastern gamagrass forage samples collected in Missouri decreased rapidly with increasing maturity following the boot stage of development (Figure 3). The elongating stem increased the fiber content of the harvested forage and reduced the leaf proportion of forage samples. 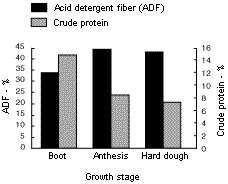 Figure 3
More fiber and less protein decrease the quality of eastern gamagrass forage after the boot stage of development.

Forage harvests should not be made until at least the year following seeding and may need to be delayed until two years after seeding to ensure that adequate stand coverage is obtained. Initial forage removal as hay or silage should be taken before the boot stage, when plants are 24 to 36 inches tall. Grazing can begin a little earlier, when the plants are 18 to 24 inches tall. An 8-inch stubble should be maintained to ensure that adequate leaf base material is present to support regrowth. Harvests of regrowth material can be made four to six weeks following the initial harvest when three to four collared leaves are present. A six-week harvest schedule has produced top yields in Missouri trials and resulted in even yield distribution through the growing season.

If grazed, a rotational stocking system should be used. This allows forage to be grazed to the proper stubble height and provides the rest period required for optimum regrowth. The use of eastern gamagrass as pasture for pregnant dairy heifers during the summer 1994 grazing season at the Southwest Missouri Research Center produced an average daily gain of 2.3 pounds per day for 70 days regardless of whether a 4- or 10-inch stubble was maintained. Increased incidence of weeds in the 4-inch stubble suggests that a 10-inch stubble is more desirable.

Following initial seed head production in July, eastern gamagrass will continue to develop seed heads throughout the remainder of the growing season until mid-September. Seeds mature from the end of the spike and will break at the joints between kernels and drop as they mature (Figure 4). This can lead to some natural seedling recruitment over the life of a stand. Seed can be harvested, but because seeds drop when they are mature, this practice requires careful planning to get maximum yields. 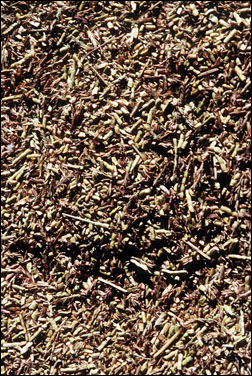 Eastern gamagrass can be adequately fertilized by following recommendations for fertilization of corn silage. This is particularly true for recommended applications of lime, phosphorus and potassium. Application of these materials should be made according to soil test recommendations. Soil tests should be obtained before establishment, and phosphorus and potassium should be applied to reach a medium test level at planting. Soil pH should be maintained in the 5.5 to 6.0 range. To reduce competition from weeds, no nitrogen should be applied at seeding. After seedlings emerge, an application of 40 pounds of nitrogen per acre will enhance seedling growth.

Nitrogen fertilization trials conducted at two sites in northern Missouri have indicated that eastern gamagrass will respond linearly to nitrogen additions up to 300 pounds per acre, producing more than 5 tons of dry matter per acre at maximum nitrogen rates when harvested at a six-week interval. Nitrogen is used most efficiently when an initial application of 50 pounds of nitrogen per acre is made as new growth begins in the spring (about May 1 in central Missouri). An additional application of 50 pounds per acre should be made following each harvest or grazing.

After the final harvest in early September, no nitrogen should be applied, and phosphorus and potassium should be top-dressed to replace the estimated amount of these nutrients that is removed in the harvested forage. Potassium fertilization will ensure winter hardiness and disease resistance.

Eastern gamagrass has the potential to provide high-quality forage throughout the summer grazing season. It can also be used as a perennial substitute for corn silage. Care must be taken to ensure adequate establishment; weed control during the establishment phase is critical. This grass can be grazed or harvested as hay or silage. An 8- to 10-inch stubble is recommended to ensure optimum regrowth and stand persistence. For this reason, rotational stocking is desirable if this forage crop is grazed.

Richard Joost, American Plant Foods, contributed to the development of this publication.