The most important factors affecting the quality of hay are

This guide has information on the first three factors as well as on hay preservatives. It does not deal with forage species.

Some forages, such as alfalfa, orchardgrass, red clover and so forth, have higher feeding values than some other forages. If you have questions on forage species, call your local MU Extension center.

When forage plants are cut, the plant continues to breathe until the moisture content of the plants falls below 40 percent. Dry matter is lost during this process, and in some cases the loss may be as high as 15 percent. Respiration losses, however, are usually about 5 or 6 percent of the total dry matter. In normal hay curing, you cannot eliminate these losses.

When the moisture content of hay drying in the field reaches about 40 percent, further dry matter losses are due to raking and baling. Losses from these operations range from 10 to 25 percent, with most losses averaging about 15 percent. Dry matter losses from raking and baling are especially severe because most of these losses come from the most valuable part of the hay — the leaves.

Using hay crimpers and crushers can greatly reduce dry matter loss. Their use reduces curing time in the swath, exposure to the weather, leaf shattering and respiration losses. All serious hay producers use crimpers and/or crushers.

The key to keeping dry matter losses of hay to a minimum are:

When hay is baled, it should not be higher than 18 to 22 percent moisture. At higher levels of moisture, bales lose large amounts of dry matter (Figure 1) caused by excessive heating and molding (Figure 2). In severe cases, spontaneous combustion is possible. 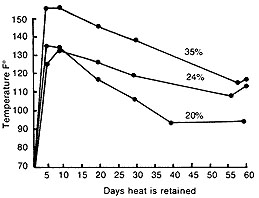 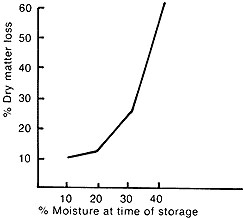 Figure 2
Spoilage loss in bales made from alfalfa-grass at different moisture levels.

Although there is no danger of burned buildings when you store large bales outside, excessive heating and molding can occur, resulting in large dry matter losses. Therefore, don't bale hay to be stored in the field until the moisture level reaches 18 to 22 percent. See Table 1.

Heating occurs to some extent in all forage material unless it contains less than 15 percent moisture.

The extent of temperature rise and duration of heat production in hay depends on moisture content. A relative humidity of 90 to 100 percent, which favors mold development, can develop in 20 percent moisture hay that is stored inside. The heat generated by the metabolic activity of the microorganisms and plant respiration increase the temperature of hay (Figure 3). Heat resistant fungi are active when the temperature is between 113 and 150 degrees Fahrenheit.

Figure 3
Causative agents in the heating of hay.

A large variety and number of microorganisms are associated with plant material in the field, but fungi are the microbes primarily responsible for breakdown of complex carbohydrates. Heating above 175 degrees Fahrenheit results in thermal death of microbes; then heat-producing chemical reactions serve to further increase temperatures. A subsequent rapid oxidation of reactive compounds may cause a further temperature rise to an ignition point of 448 to 527 degrees Fahrenheit. If enough oxygen is present, flames will erupt. The time required for heating to combustion may vary from four to 10 weeks, depending on storage and climatic conditions and on the moisture content of the forage.

The obvious consequence of spontaneous heating of forages is combustion, which has resulted in numerous barn and silo fires. But molding of forages and heating to temperatures below ignition also result in serious losses of forage quality and quantity. Available carbohydrate and protein portions of forages are reduced. Carbohydrates are used in microbial metabolism and subsequent chemical oxidation. Protein is bound in an unavailable form (sugar-protein polymer) through browning or the Maillard reaction.

Moisture levels for safe storage of hay vary with size and density of the bale and type of hay. In general, hay in small rectangular bales should be baled at less than 22 percent moisture to keep molding and heating to a minimum. Large round bales retain internal heat much longer than conventional bales. Therefore, hay should be less than 18 percent moisture before baling in large bales. If you are storing or sheltering some of your big bales, this long-term heat retention affects the proper time to move big bales into storage. See Figure 2. Hay baled with more than 22 percent moisture should probably not be put into storage for at least 30 days. This is especially true if bales are to be stacked several layers deep.

With the threat of barn fires removed by outside hay storage, many operators of large round balers try to bale hay with too much moisture. But excessive heating and molding can cause the loss of as much as one-third of the feeding value of hay baled at 28 percent moisture.

The stage of maturity at time of harvest is one of the most important factors affecting forage quality.

Grasses, which are somewhat lower in feed potential than legumes to start with, follow the same decreasing pattern in feeding value as they mature. Grasses such as fescue and orchardgrass will often be as low as 6 percent crude protein after blooming when the seeds are beginning to form.

Legume-grass mixtures should be harvested when the legume reaches the desired stage of maturity regardless of the growth stage of the grass.

If the plants are not under stress conditions, the recommended stages of maturity for harvesting common forage plants in Missouri are:

Overall losses due to late hay making can reach staggering proportions. Shattering and wilting losses are always proportionately higher with late-cut than with early-cut forages. Such as economic loss affects the profit of livestock farms.

The four major contributors to feed value losses in hay are:

If hay is baled with a moisture content of 20 to 22 percent, loft or mow-stored hay should not lose more than 5 percent of its original dry matter during the first year of storage. It will lose very little of its digestible nutrients during that time or in succeeding years. One exception: The hay will suffer some loss of carotene, the precursor of vitamin A, following one year of storage.

Large bales stored outside will suffer variable losses, depending upon a combination of factors. These factors are: moisture of the hay at baling time, amount of rain and snow during the storage period, internal drainage of the soil on which bales are stored, amount of space between the bales, type of hay (grass or grass-legume), and the skill of the operator making the bales.

There are two types of storage losses suffered during outside storage. The easiest to see and the one that has been measured in many experiments is the total dry matter loss. This represents the weight loss between the beginning of storage and the time the hay is fed. While this loss is quite variable between experiments, it is usually in the range of 6 to 15 percent of the total hay stored, with the norm much closer to 15 percent than to 6 percent.

The second type of loss in outside storage is the loss in digestibility of the weathered portion of the hay. Just because the cattle eat most of this portion does not mean that it is as high in feeding value as the unweathered part. In fact, the loss of feeding value in the weathered portion of the hay usually is a greater source of loss than that from total dry matter loss. When these two types of losses are added together, the loss of total feed during storage will usually approach 25 percent.

Select your storage area carefully. Store bales on well drained areas. Some farmers place them on poles or crushed rock to minimize losses on the bottom of bales. Some research has shown that these techniques reduce storage losses by 15 percent. Always place bale rows in the same direction as the prevailing winds.

There does not seem to be much difference in storage losses of bales set side-by-side versus those set end-to-end. One note of caution: Bales placed end-to-end should be the same size. Cone-shaped bales or bales of different diameters placed end-to-end often cause excessive spoilage on the ends of bales.

Some general guidelines can help reduce outside storage losses:

Farmers in the past often applied salt to hay as it was stored in the barn to prevent mold and heating. This practice had some merit, but the amount of salt needed for hay of very high moisture content would be so great that the salt would be extremely expensive. In many cases, the salt would lower the palatability of the hay.

Recent research to prevent storage losses of moist hay involved organic acids. The ones receiving the most attention have been propionic-acetic acid mixtures and pure propionic acid products. They have been successful in reducing molding and heating and in preserving the original feed value if applied at correct levels. The major drawbacks have been cost and application problems. The organic acids probably operate as fungicides to prevent molds from forming in the hay.

Application rate is dependent on bale moisture. (Table 3). Moisture content is best measured by taking a sample from the windrow and drying it using a microwave oven or small commercial convection ovens. Wet and dry weights can be taken with a gram scale. For more information about drying hay using a microwave oven. Stab-type capacitance moisture testers are less accurate and give higher-than-actual moisture values, especially in dense bales.

Acid preservatives are best applied at the baler. Propionic and acetic acids are volatile and will be lost if applied long before baling. Acids remove paint, allowing metal parts to rust. To reduce rusting, avoid spilling acids on equipment, run untreated hay through the baler after baling, and coat bare metal with light oil.

Bales treated with preservatives are extremely heavy and, in most instances, they need to be handled mechanically. When the bales dry, the strings and wires become loose, making them difficult to handle. Re-baling may be necessary if hay needs to be rehandled and transported.

Should you use preservatives? There is no firm yes or no answer. First, consider the value of the final product. Adding $5 to $10 per ton in preservatives' cost to a ton of high-quality alfalfa hay worth $65 on the market is more economically feasible than adding the same amount to fescue hay worth about $25 to $30 per ton on the market.

Preservatives reduce the time needed for hay to cure in the field and, thus, reduce the risk of rain damage to the hay. If properly used, preservatives substantially reduce storage losses of high-moisture hay.